Have you ever had one of those days when the wrong person came to call at the wrong time?

You know what we mean. You've had a long, difficult day, and after you've finally managed to just get settled in your favorite chair to relax, the doorbell suddenly rings. Or there's an insistent knock at your door. Or even worse, both of those things happen, there's a short pause, and then they repeat, so you *have* to get up to make it stop.

When you get to the door, instead of it being that special delivery of a major award, you're saddened to discover that there's someone there that you have absolutely no desire to interact with. Like a pest control "specialist" who just happened to be in the neighborhood to do a job, but has plenty of time to wander from house to house soliciting new business.

Or maybe they want to sell you magazine subscriptions. Or legal services. Or roofing repairs. Wouldn't it be nice if you could employ your own special form of pest control to keep such unwanted solicitations at bay?

That's where Harold Mathis' invention of the Anti-Intrusion Mat might come in handy. Awarded U.S. Patent #8,760,839 in 2014, the invention's abstract describes what an anti-intrusion mat is and how it might be used:

An anti-intrusion mat preferably includes a floor mat; a power source, a high current generator and a plurality of electrodes. Such an arrangement may enable the device to be infused with an electrically charged current. In this manner, users may be able to effectively disarm and disable a would-be intruder before they gain entry into a home. The floor mat may be fabricated of a durable, rubberized material and include an attractive border fashioned from functional yet aesthetically pleasing Berber carpeting. The plurality of electrodes may be interwoven into the rubberized center portion of the floor mat where the perpetrator may likely be standing, to release electroshock currents when activated. Such an electroshock current may result in neuromuscular incapacitation to the perpetrator. The device may further be equipped with a handy remote control device to discreetly activate the electrodes.

Maybe our favorite part of that description is that the mat might be made from "aesthetically pleasing Berber carpet" - the perpetrator at your door would never see it coming!

Of course, no patent is complete without illustration, so below, you can find both the control device you can use to activate electroshock currents, and also what we'll describe as a functional and aesthetically pleasing "unwelcome mat." 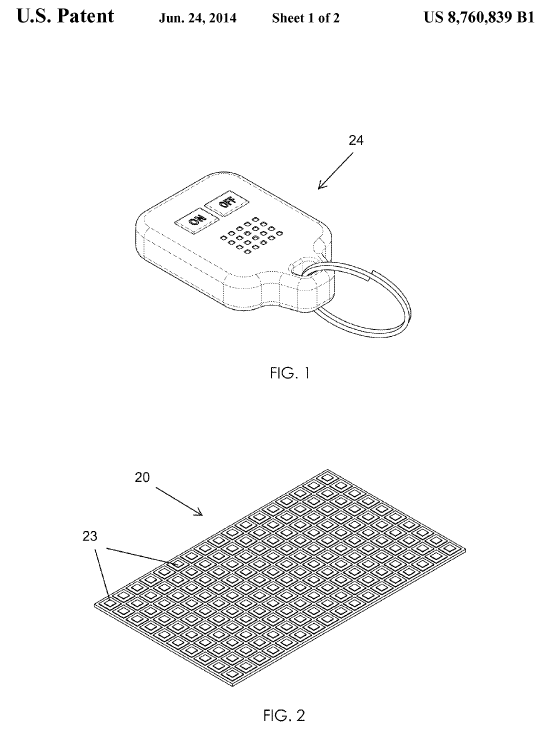 The patent goes on to describe how and where the mat might be employed:

There are several significant benefits and advantages associated with the anti-intrusion mat. As a non-limiting example, the device may provide homeowners with a simple and effective means of preventing a possible home invasion. Offering enhanced alarm reinforcement, the device may sufficiently strengthen an entryway into the home. In this manner, even if a homeowner is fooled into cracking open a door for a visitor with nefarious intentions, the device may be immediately activated, so that the criminal goes no further. As they are more susceptible to attack from a younger, stronger assailant, seniors may more effectively defend their homes with installation of the device. While the home invasion scenario has been the primary focus of this report, the device may also benefit a vast array of businesses. Strategically placed at doorways or even in front of a checkout counter, such a device may allow proprietors to completely disable a crook holding them up at gunpoint, or thwart the escape of a thief. In this manner, the device may handily prevent loss of life as well as loss of property.

Use and application of the anti-intrusion mat would be very simple and straightforward. First, the user may place the mat directly in front of one's doorway, either inside or outside of the home. For added security, those who have more than one way into their house may wish to employ additional units. Should the user find himself/herself in a situation where an intruder attempts to push the door in on them, or should any unauthorized attempt be made, the device may be activated via the user's remote control device. As a result, the intruder may be immediately stopped in his tracks, as the taser-like electrical currents completely incapacitate him. While halting a crime before it occurs, the device may also buy the user time to notify police.

Now, if only some inventor out there would come up with an automated armed drone to pursue and deliver additional taser-like electrical currents to the perpetrator if the unwelcome mat fails to deliver sufficient electrical shocks for them to experience neuromuscular incapacitation on your doorstep, we'll finally have a home security system for the twenty-first century!