Marketwatch reported earlier that Bitcoin is currently being priced at above the price of gold in USD terms: http://www.marketwatch.com/story/bitcoin-is-now-worth-more-than-an-ounce-of-gold-for-the-first-time-ever-2017-03-02?siteid=bnbh 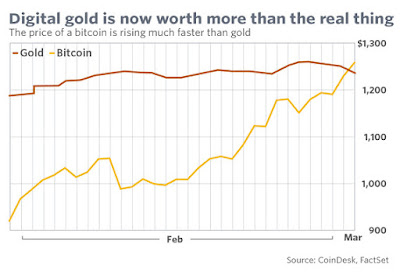 The comparative is somewhat silly, because, as Marketwatch article notes, Bitcoin market cap is much much smaller than that for gold, which implies that any valuation of Bitcoin to-date incorporates a hefty liquidity risk premium compared to gold. In addition - unmentioned by the Marketwatch - Bitcoin lacks key financial properties of gold, including:

The above points mean that in addition to liquidity risks, Bitcoin price is also factoring in premium for lacking the broader safe haven and hedging properties.
While the continued evolution of Bitcoin is a great thing to watch and take part in, immediate valuations of Bitcoin are subject to severely concentrated risks, including the currently extremely elevated risk of Bitcoin demand being severely skewed to China (http://trueeconomics.blogspot.com/2017/01/18117-bitcoin-demand-its-chinese-tale.html) and the supply and legal rights issues with Bitcoin. Hence, as it says on the tin: the comparative to gold is silly, even if entertaining.