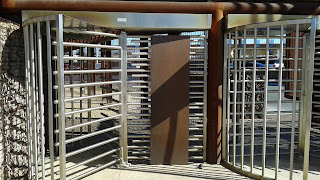 I attended an ISA panel Friday morning during which several participants discussed state failure or state collapse, although they were not necessarily referring to anywhere in the Americas (except maybe Venezuela). We really haven't heard those terms with regard to Central America in over five years. For Central America, 2009 was a really rough year. In Guatemala, Rodrigo Rosenberg's May murder-suicide led to protests seeking the dismissal of President Alvaro Colom, the man Rosenberg blamed for his murder before we learned it was his actual suicide.

One month later, Manuel Zelaya was overthrown in a coup and escorted out of Honduras into Costa Rica in his pjs. The instability caused by the coup led to increased violence, state repression, drug trafficking and organized crime. El Salvador escaped much of the talk about failed states at the time. Shortly after taking office in 2009, the FMLN and President Mauricio Funes suffered some threats from conservative forces indicating that they would suffer the same fate as Honduras if they took the country in too radical a direction.

I went to one meeting in Virginia in late 2009 to speak with US officials who were seriously concerned about Guatemala, and the Northern Triangle more generally.

During Friday's panel, I kept thinking that President Trump's policies are likely to increase stability instability throughout Central America, to the point where we will once again be speculating about state failure.

For the past several decades, Central American governments have reaped the benefits of mass migration. Central America has not created enough jobs to satisfy those entering the workforce  and migration has operated as a release valve. Private and public sector policies have done little to reduce the number of people living in poverty. Remittances in the form of billions of dollars each year have provided a safety net for people who otherwise would have nothing.

With thousands of people leaving each Northern Triangle country each year, thousands have also been forcibly repatriated. "Bad dudes" or not, public and private sectors have been unprepared to address the complications of reintegrating so many people. The US and Central America seem more cooperative on immigration and deportation issues today than they used to be but challenges remain and they are more likely to get worse with the Trump administration ramping up deportations and, just as bad perhaps, worsening the treatment of Central American nationals in the US.

A release valve, remittances, and cooperation on deportations might be ending if President Trump gets his way. Is it possible that Central American governments will now just work harder to satisfy the demands of their citizens? I'm sure they will but it hasn't always simply been about "will" or the "lack of willingness." Governing in Central America's Northern Triangle is really hard.

What we don't have a sense of is what the Trump administration will do with the US' relationships with Central America when it comes to trade, economic and security assistance, anti-corruption initiatives, and climate change and energy cooperation. If the US increases assistance in these areas (which I have no reason to believe it will), will any positive consequences offset the negative consequences of upsetting migratory patterns?