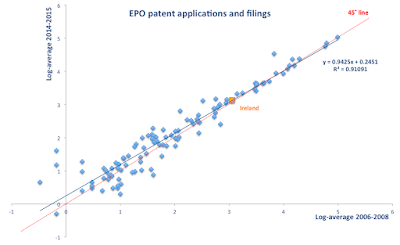 Not surprisingly, Ireland comes smack in the middle of the distribution and right on the regression line, implying that:
Yes, patents are not the only measure of innovation and R&D, but, being the core part of STEM-focused research, they are the main measure of innovation and R&D, because patents data omits only one form of innovation - that linked to software. Now, software innovation is important, and Ireland may or may not be doing well in this sub-sector, but STEM research is based not on software innovations, but on 'hard' patents. And Ireland does not brand itself as 'Software-only Innovation Hub'. In fact, Ireland spends (as a State and economy) more on STEM innovation than on software innovation, so the key focus on Irish policies is, once again, measurable via patents.
Until we get 2016 data to update the above analysis, I rest this topic discussion.