Tony and I had a good reason to meet in Chicago last week. This is his home town and he offered to give me the "deindustrialization tour" of the Second City. So on a splendid spring day he drove me around while I observed. Not surprisingly, some parts of Chicago have absorbed the economic shock of globalism / neoliberalism far better than others.

Some observations:
Chicago's economic ennui is likely shared across the world. But one thing is still abundantly clear—this was once a city of energy, distinction, and vast industrial power. This was a city built by folks of great imagination. Deindustrialization is the proximate cause of the widespread destruction of this city. But more importantly, most of the destruction demonstrates a failure of imagination. Of course, it requires SOME imagination to build a golf course on a slag heap but compared to what was once there, it demonstrates the imagination of a child playing grown-up. In my darker moments I am convinced that we are doomed because we have passed "peak imagination." I hope I am wrong.


On passing through the center of the city

Cloud Gate (the Bean) has some interesting neighbors. The building with the steeply pitched roof is officially the Crain Communications Building but the locals call it Vagina Tower because it is such a contrast to the phallic buildings that surround it.  If you look closely, that roof is being worked on by some crazy-brave people. 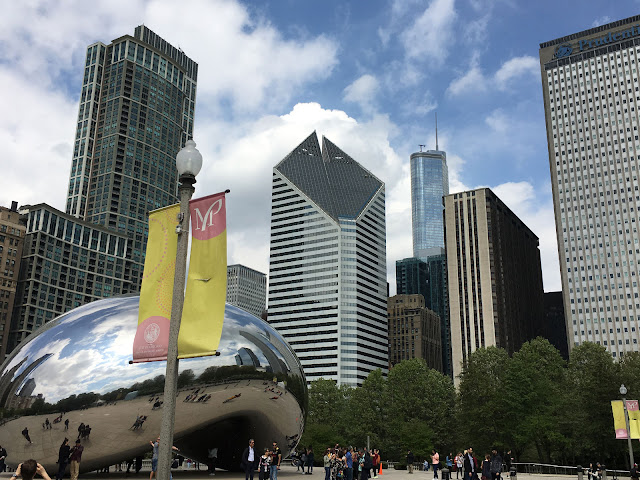 The Bean seems very popular in spite of the hassles to see it up close—including parking that costs $21 for the first 20 minutes. The main reason is that unlike most public art (which looks like it was constructed by metal shop troublemakers), its execution is so perfect, it borders on miraculous. Most of us cannot conceive of making stainless steel so shiny, much less shaped so perfectly that it becomes a very expensive fun house mirror. The trick is grind the plates and welds to 1000 grit and then polish everything with jewelers rouge. I get weary just thinking about it. The most interesting reflections are seen from underneath. Tony and I can be seen in several places in this shot. 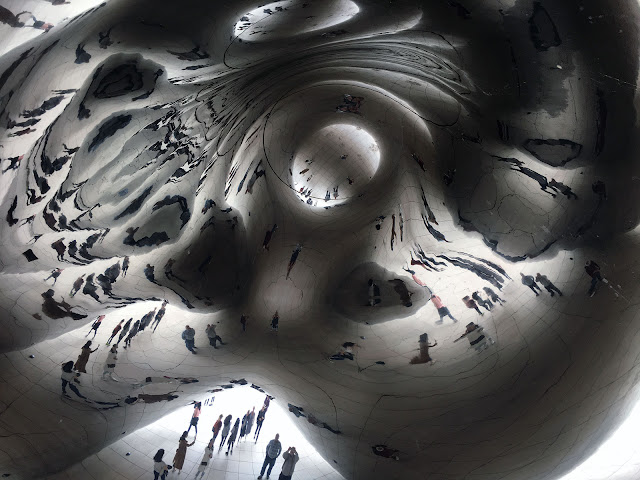 The older skyscrapers on Michigan Ave. are in excellent shape—some are quite beautiful. Tony checks his smart phone. 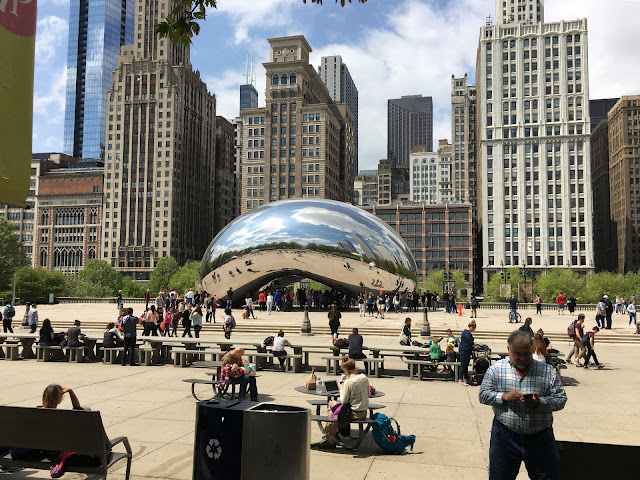 The Chicago Cultural Center is housed in the old public library. It has been superbly restored and maintained. Shown here is the Tiffany dome. 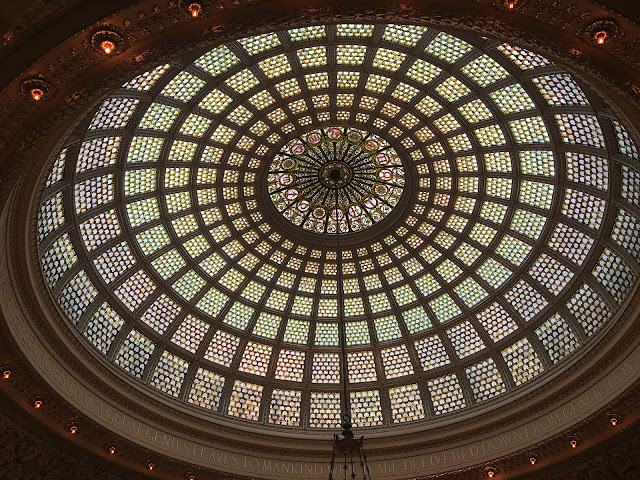 Wherever you look, there are monuments to the instinct of workmanship. Not only did world-class artisans come to Chicago to build such magnificent structures, but it's obvious that some of their descendants must still work in the city. 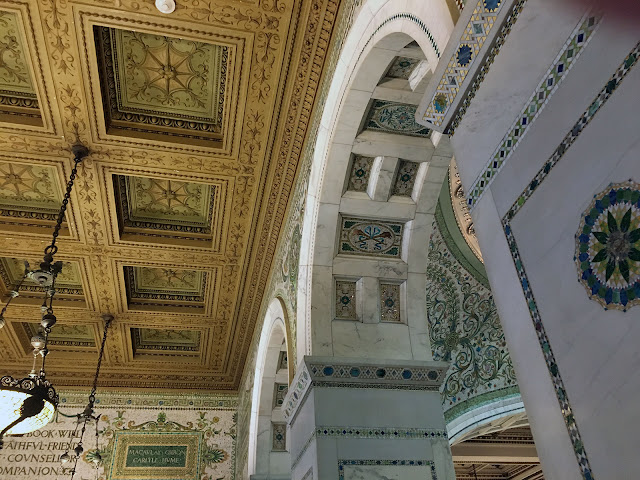 Hard to remember when public libraries were accorded such respect. 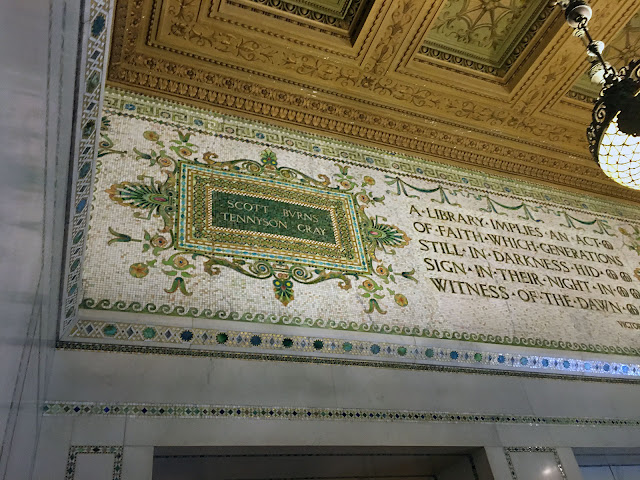 And this is the new Public Library—a post-modernist monstrosity. Those sculptures on the corners are supposed to depict owls. And no, they are not made of aged copper—that is painted aluminum. 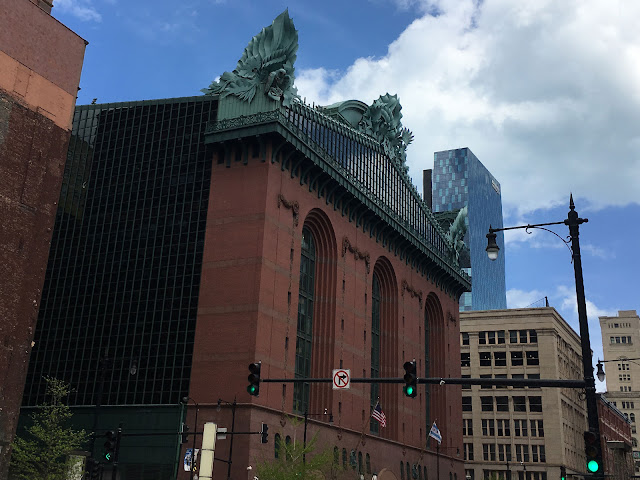 The First Impression is a tile header over the door to what was once an important print shop on Printers Row. It is fabulously maintained / restored. 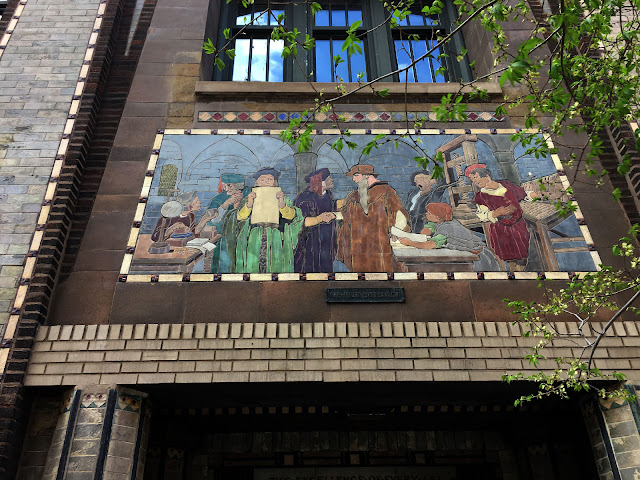