According to foreign trade data released earlier this month by the U.S. Census Bureau, U.S. imports from China surged in March 2017, following a month in which they had plunged by a "record amount".

We're revisiting that account today because last month, we found ourselves in the rare position of contradicting news reports that suggested that the reason for February 2017's plunge in Chinese imports was caused by "slowing domestic demand". We argued instead that the primary culprit behind the decline in the amount of Chinese goods reaching America's shores in February was the timing of China's 2017 Spring Festival, a week long holiday that largely shuts down operations at Chinese ports, which greatly diminishes incoming traffic at U.S. ports two to three weeks later after accounting for the trans-Pacific transit time for the largely shipborne cargo.

Once the Chinese holiday ends, China's ports get back to business, which we can see in our calculation of the year over year growth rate of the volume of goods and services traded between the U.S. and China that the U.S. Census Bureau has reported for March 2017. 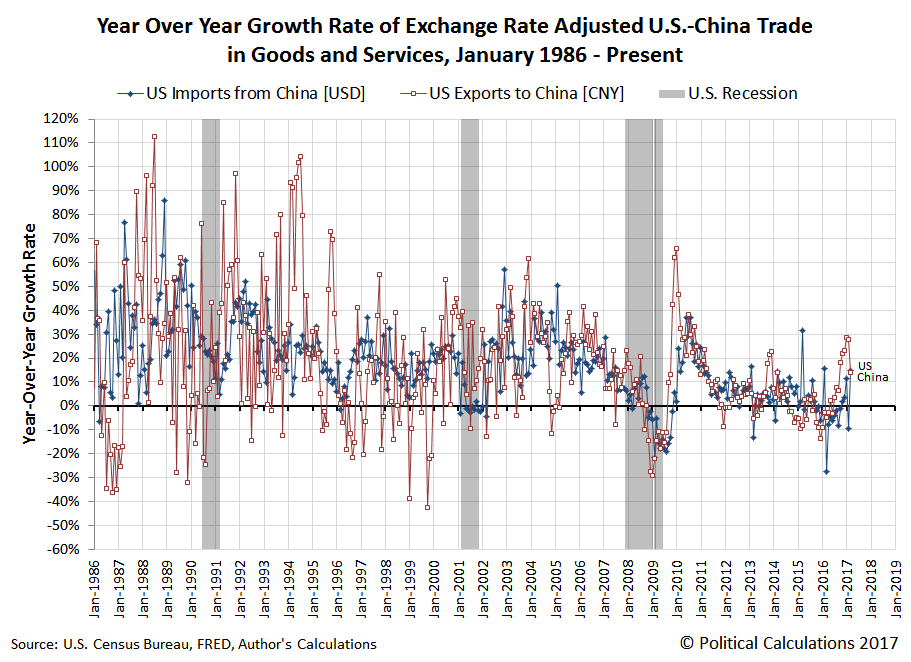 Here, we can see that the value of goods imported into the U.S. from China has rebounded above their February 2017. Now, that's not saying very much, because that year-over-year increase of nearly 15% above is in part based upon a very low March 2016 level, which was itself depressed because of the timing of China's 2016 Spring Festival.

We can however compensate for that factor by switching up the growth rate math to instead look at the value of goods imported into the U.S. from China over combined two-month-long periods, which can absorb the pause in recorded trade resulting from the variable timing of China's Spring Festival. In doing that math, we find that the combined value of February and March 2017's imports from China shows a 1.4% increase over the combined months of February and March 2016, suggesting sluggish but positive growth for the U.S. economy during this time.

Considering the rate of influx of U.S. goods flowing into China, that year-over-year growth rate dipped in March 2017, but continued to be fairly robust. Taking the rate of growth of imports as an indicator of the relative health of China's economy suggests that it is continuing to grow somewhat more strongly than the U.S. economy at this time.

On a final note, that situation may be changing. Several months ago, we here at Political Calculations began seeing a notable uptick in site traffic from China to our tool for reckoning the odds of recession from the spread of the yields between long and short term treasury bonds.

Set up specifically to consider U.S. treasury yield spreads in era before the Federal Reserve began its Zero Interest Rate Policy (ZIRP), we believe it is drawing interest from China because that nation's bond yield curve has flattened and has recently begun to invert, which our tool would indicate as potential harbinger of a pending recession beginning sometime in the next 12 months.

We don't know if that's the scenario that will play out in China. Our tool is specifically based on pre-2006 U.S. treasury yield spread data, where we don't know how well that might translate to China's economic situation, so if you're reading this from China, please do take that factor into consideration.

And if you are reading this from China, you absolutely will want to pay attention to the year over year growth rate of China's imports from the United States, as measured by the U.S. Census Bureau as a comparatively high quality data source. If that growth rate turns negative outside of the months affected by the timing of China's annual Spring Festival, then that would be a near real-time indication that China's economy is indeed slowing down, which is very definitely something that we've directly observed in the past.