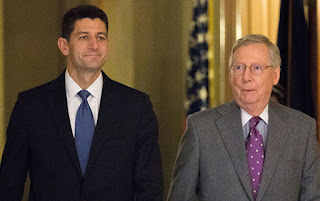 It is truly stunning that the President of the United States has almost certainly given classified information to the Russians because he loves bragging and has no control over his tongue.  He has himself pretty well admitted this in his latest tweets (here and here).

It is worth taking a moment to think about how extraordinary this is.  The president of the United States gives intelligence to the Russians!  This was the stuff of jokes not very long ago, or far fetched political thrillers.  Now, it's real.

Now consider the reaction of the Republican leaders on the Hill, Paul Ryan and Mitch McConnell.  They hounded Hillary Clinton over her emails (though no significant information was ever discovered to have leaked) and set up numerous committees to investigate the Benghazi Embassy attack.  They portray themselves as American patriots.  With the exception of a half-hearted mention by Ryan, they have had nothing to say on this issue.  No comment on the fact that the president has given classified information to a hostile power, endangering the intelligence relationship with an ally in so doing.

Ryan and McConnell have spent a long time demeaning themselves and placing party interests before country, but so far this is their nadir.  It's ok to put intelligence lives at risk and betray your country's secrets if it means keeping a Republican in the White House.  McConnell has already shown how little he regards America's once revered constitution with his party games over the Supreme Court.  Ryan's whole mission in his political life has been to cut funding to any form of welfare programmes. Not exactly a couple of inspiring political heroes even before the Trump juggernaut exposed their self-serving, vindictive and malicious political dealing.

Donald Trump is a braggart and a moron who has little idea of the implications of his actions.  His only defence is that no-one expected any better of him; his whole political adventure has been to extend the brand of Trump and give his barely thought through political beliefs a megaphone to the world.  But Ryan and McConnell have come through political life.  They have brains of a higher working order.  Unlike Trump, they do know exactly what they are doing.  And it is one of the most depressing political spectacles ever witnessed.  Not since the days of Franz von Papen have we seen such naked political self-interest and cowardly retreat from morality give service to such an unspeakable populist power.

When the history of the decline and fall of the American Republic is written, Ryan and McConnell will have prominent roles.  But why would they care?  What is the future of the republic compared to their political careers?