Who is really paying Philadelphia's controversial soda tax? And how much, if at all, has it affected the economy of the City of Philadelphia? 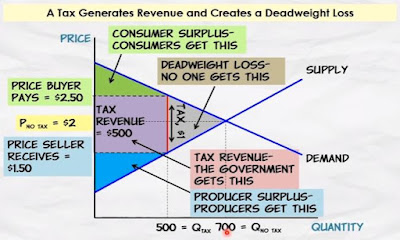 The answer to the first question involves the concept of tax incidence, which considers the all too common reality that the people and businesses that are intended target of a tax are not necessarily the source of the money that pays the tax. For Philadelphia, what we want to find out is what percentage of the tax is being paid by the distributors who were specifically targeted to be taxed by the city versus the percentage of the tax that is being passed through to the city's consumers of sweetened beverage products subject to the tax.

Meanwhile, the answer to the second question involves the economic concept of deadweight losses to an economy, which can arise whenever the optimum equilibrium between supply and demand for goods or services that maximizes the benefits to a population of consumers and producers is prevented from being achieved. If a deadweight loss exists, it represents the amount of economic activity that has been directly lost because of the imposition of the tax, which tells us the degree to which the city's economy may have shrunk as a result.

We ran the numbers to calculate both sets of figures back in March 2017 for Philadelphia's newly imposed tax on a wide array of naturally and artificially-sweetened beverages distributed for sale within Philadelphia's city limits, but now, we have more finalized numbers for the amount of tax revenue actually being generated by the tax through the first four months of 2017 and also a more refined estimate of the quantity of sweetened beverages that would have been distributed in the city in the absence of the soda tax, which will allow us to better estimate both the tax incidence and deadweight loss that has resulted from Philadelphia's beverage tax to date.

We've plugged those updated numbers into the tool we built to do the math below, where our "time period of interest" is the first four months of 2017, which is the most current data we have at this writing. If you're accessing this article on a site that republishes our ?RSS news feed, please click here to access a working version of the tool.

In the tool above, we also updated the "Unit Price of Item With the Tax" to reflect the discounted sale price for a 12-pack of 12 fluid ounce cans of Coca Coca Coke Classic at the Acme Markets at 19th and Oregon, which applies for the week of 9 June 2017 through 15 June 2017. Dividing the sale price of $5.66 by 144 ounces works out to be a discounted unit price of 3.93 cents per ounce. Meanwhile, the same ShopRite location that we used in our previous example is still selling a 2-liter (67.6 fluid ounces) of Coca Cola Coke Classic for $3.00 per bottle, which gives an upper end for the unit price of 4.43 cents per ounce, so the tax incidence will vary for Philadelphia consumers by the locations where they might shop.

Using the updated numbers we've entered as the default values in the tool above, we find that for our time period of interest, January through April 2017, the total amount of taxes collected by Philadelphia through its new beverage tax is $25.6 million. Of this tax, the majority (66%) of the actual burden of paying the tax is being passed through to the city's population of sweetened beverage consumers, with only a lesser fraction (34%) coming out of the pockets of the city's soft drink distributors (at ShopRite this week, it would be 99.3% consumer, 0.7% distributor). We also estimate the deadweight loss of the tax through the first four months of 2017 totals $6.777 million.

Multiplying the dollar figures by a factor of three allows us to project the tax collections and deadweight loss will be for all of 2017, assuming the level of post-tax consumption established during the first four months of the year continues. With that assumption, Philadelphia would be on track to collect $76.8 million, which will fall over 17% short of the $92.4 million that city officials were counting upon to fund park improvements and the expansion of pre-K schooling in the city to up to 6,000 children, as well as to boost the city's general fund. Given the projected numbers, we would anticipate that one or more of these initiatives is going to be scaled back, unless the city reduces spending elsewhere in its budget to make up the difference.

Meanwhile, the projected deadweight loss of economic activity to the city from its controversial tax would be $20.3 million for the year. This figure is the total amount by which the controversial soda tax imposed by the city's civic leadership would be responsible for shrinking the economy of the city of Philadelphia.

You're more welcome to use our tool to update these estimates as new information comes out, or to consider what the impact of a similar tax might be in other jurisdictions. If you're so inclined, you can even do the math for the image of the supply and demand curves that we included at the top of the article!