Predictably (in line with the median investors’ outlook) the Fed raised its base rate and provided more guidance on their plans to deleverage the Fed’s balance sheet (more on the latter in a subsequent post). The moves came against a revision of short term forecast for inflation (inflationary expectations moved down) and medium turn sustainable (or neutral) rate of unemployment (unemployment target moved down); both targets suggesting the Fed could have paused rate increase.

Rate hike was modest: the Federal Open Market Committee (FOMC) increased its benchmark target by a quarter point, so the new rate range will be 1 percent to 1.25 percent, against the previous 0.91 percent. This marks the third rate hike in 6 months and the Fed signalled that it is on track to hike rates again before the end of the year (with likely date for the next hike in September). The forecast for 2018 is for another 75 basis points rise in rates, unchanged on March forecast.

Interestingly, the Fed statement highlights that inflation (short term expectations) remains subdued. “Inflation on a 12-month basis is expected to remain somewhat below 2 percent in the near term but to stabilize around the committee’s 2 percent objective over the medium term,” the FOMC statement said. This changes the tack on previous months’ statements when the Fed described inflationary outlook as “broadly close” to target. Data released earlier today showed core consumer price inflation (ex-food and energy) slowed in May for the fourth straight month to 1.7 percent y-o-y. This is below the Fed target rate of 2 percent and suggests that monetary policy is currently running countercyclical to inflation. On expectations side, FOMC lowered its median forecast for inflation to 1.6 percent in 2017, from 1.9 percent forecast published in March. The FOMC left its forecasts for 2018 and 2019 unchanged at 2 percent.

The Fed, therefore, sees inflation slump to be temporary, which prompted U.S. 2 year yields to move sharply up: 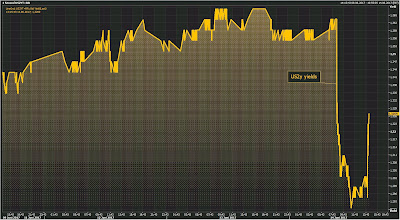 Which means that today’s hike was not about inflationary pressures, but rather unemployment, which dropped to a 16-year low at 4.3 percent in May.

As labour markets continue to overheat (we are now at 4.2 percent forecast 2017 unemployment and with over 1 million vacancies postings in excess of jobs seekers, suggesting a substantial and rising gap between the low quality of remaining skills on offer and the demand for higher skills), the Fed dropped its estimate of the neutral rate of unemployment (or, in common terms, the estimated minimum level of unemployment that can be sustained without a major uptick in wages inflation), from 4.7 percent in march to 4.6 percent today. At which point, it is worth noting the surreality of this number: the estimate has nothing to do with realistic balancing out of skills supply and demand, and is mechanically adjusted to match evolving balance between actual unemployment trends and inflation trends. In other words, the neutral rate of unemployment is Fed’s voodoo metric for justifying anything. How do I know this? Ok, consider the following forecasts & outlook figures from FOMC:


The FOMC next meets in six weeks, on July 25-26. Here is the dots chart of Fed’s expectations on benchmark rate compared to previous: 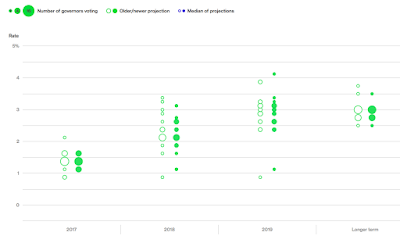