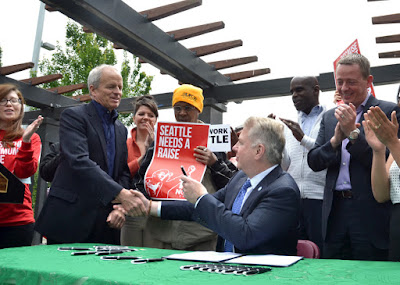 As anybody with common sense might reasonably predict, mandating such a series of increases in the cost of labor for a business in such a short period of time without also mandating increased revenues to support it would likely lead to reductions in the amount of labor consumed by the businesses affected by the ordinance. And in fact, a new NBER paper authored by a team of University of Washington economists who had unique access to the payroll data of affected business found exactly that.

But that's the expected result from the analysis. What was surprising was that the authors used the highly comprehensive data set to which they had access in a successful attempt to replicate the results of one of the most controversial minimum wage studies on record: the 1994 Card-Krueger case study of the relative effect of a minimum wage increase upon employment in the fast food industry in adjacent communities in New Jersey and Pennsylvania.

This paper examines the impact of a minimum wage increase for employment across all categories of low-wage employees, spanning all industries and worker demographics. We do so by utilizing data collected for purposes of administering unemployment insurance by Washington’s Employment Security Department (ESD). Washington is one of four states that collect quarterly hours data in addition to earnings, enabling the computation of realized hourly wages for the entire workforce. As we have the capacity to replicate earlier studies’ focus on the restaurant industry, we can examine the extent to which use of a proxy variable for low-wage status, rather than actual low-wage jobs, biases effect estimates.

We further examine the impact of other methodological choices on our estimates. Prior studies have typically drawn “control” cases from geographic regions immediately adjoining the “treatment” region. This could yield biased effect estimates to the extent that control regions alter wages in response to the policy change in the treatment region. Indeed, in our analysis simple geographic difference-in-differences estimators fail a simple falsification test. We report results from synthetic control and interactive fixed effects methods that fare better on this test. We can also compare estimated employment effects to estimated wage effects, more accurately pinpointing the elasticity of employment with regard to wage increases occasioned by a rising price floor.

Our analysis focusing on restaurant employment at all wage levels, analogous to many prior studies, yields minimum wage employment impact estimates near zero. Estimated employment effects are higher when examining only low-wage jobs in the restaurant industry, and when examining total hours worked rather than employee headcount.


What makes their success in replicating the results of the Card-Krueger study by filtering the Seattle data to reproduce its limitations is significant in that it effectively invalidates Card and Krueger's 1994 finding that minimum wage increases have no effect upon employment. Simply put, the limited nature of the data that Card and Krueger used to support their earlier study of the effect of New Jersey's 1992 minimum wage hike almost certainly led them to miss its true effect on employment after it went into effect. 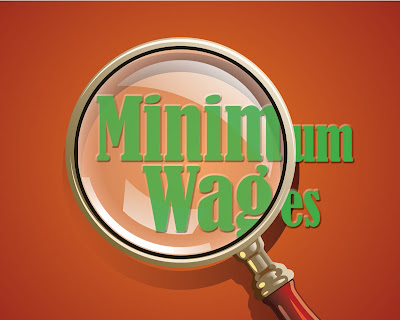 This same issue of data detail has come up before with economists who rely upon income tax data to measure income inequality, which similarly fails to capture the true nature of the distribution of income by not providing the additional individual-level detail that other data sets provide. We've described the knowing use of such limited data without acknowledging its limitations as "analytical malpractice", which in the worst cases, crosses the ethical line into outright pseudoscience.

To be fair, we believe that the Card and Krueger's case study was a good faith effort that applied a novel approach to attempt to measure the impact of a minimum wage hike on employment. The limitations of the data they had available however meant they were weren't capable of detecting the reduction in labor hours that occurred across all employees in the industry, which the Seattle minimum wage study indicates would have negatively affected many whose wages are above the levels that would be directly impacted by minimum wage increases.

Since we've touched on the topic of pseudoscience in this post, particularly where the limitations of data are concerned, we should note that there's more going on with respect to the analysis of the impact of Seattle's minimum wage hikes that more strongly fits into that category. Specifically, as Jonathan Meer has observed:


This paper not only makes numerous valuable contributions to the economics literature, but should give serious pause to minimum wage advocates. Of course, that’s not what’s happening, to the extent that the mayor of Seattle commissioned *another* study, by an advocacy group at Berkeley whose previous work on the minimum wage is so consistently one-sided that you can set your watch by it, that unsurprisingly finds no effect. They deliberately timed its release for several days before this paper came out, and I find that whole affair abhorrent. Seattle politicians are so unwilling to accept reality that they’ll undermine their own researchers and waste taxpayer dollars on what is barely a cut above propaganda.

That sounds startingly similar to the "battle of the experts" dynamic described by former antitrust litigator David Gelfand in our Examples of Junk Science series, which we should note also fails the Goals, Progress, Challenges, Inconsistencies, Models and Falsifiability categories in our checklist for detecting junk science.