The Federal Open Market Committee (FOMC) are the decision makers at the Federal Reserve who meet every six weeks to decide how to set short term interest rates in the United States. They held their most recent meeting on Wednesday, 26 July 2017 where, frankly, they didn't decide on very much....

The Federal Reserve kept interest rates unchanged on Wednesday and said it expected to start winding down its massive holdings of bonds "relatively soon" in a sign of confidence in the U.S. economy.

* FOMC appears to strengthen characterization of current inflation trend, removing word "somewhat" to describe how far inflation measures are running below its 2 percent target at present

* Looking ahead, however, FOMC sees inflation remaining "somewhat below 2 percent in the near term but to stabilize around the Committee's 2 percent objective over the medium term" (unchanged from June)

If you want to know more about what the Fed's July 2017 statement changed from the statement it issued six weeks earlier, the Wall Street Journal's "Parsing the Fed" posts on its Real Time Economics blog has you covered!

For our purposes, we'll using the timing of the Fed's meeting schedule to update our Recession Probability chart, which indicates what the odds of a recession in the U.S. will be up to one year into the future from the indicated dates. 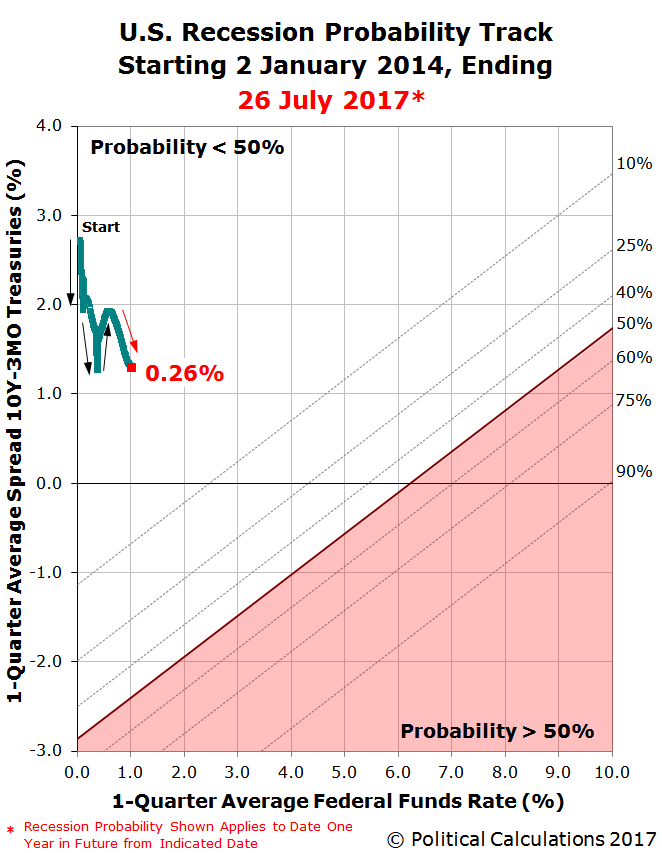 With the Federal Funds Rate effectively set at 1.16% (the midpoint of the FOMC's current target range between 1.00% and 1.25%) and the slightly declining spread in the yields between the 10-year and 3-month constant maturity U.S. Treasuries declining slightly, the probability of a recession occurring within the next 12 months of 26 July 2017 ticked up to... 0.26%, which is to say that there's little very probability that the National Bureau of Economic Research will declare that a national recession began in the U.S. during this period at a later date based upon Jonathan Wright's recession forecasting method.