While headline figures for net migration to Ieland paint an overall positive picture in the annual data (provided on April-April basis) for 2017, there are some creases on the canvas, both good and bad.
Top line numbers are good: net inward migration posted a print of 19,800 in 2017, up on 16,200 in 2016 and 5,900 in 2015. This marks the third year of positive inflows. However, on a cumulative basis, the last three years are still falling short of offsetting massive outflows recorded in 2010-2014. Cumulatively, between 2010 and 2017, the overall net migration stands at -65,900. Taking last two years’ average net inward immigration, it will take Ireland almost 4 years to cover the shortfall. Worse, on pre-crisis trend (omitting peak inward migration years of 2005-2007), we should be seeing inward net migration of around 27,100, well above the current rate. And on a cumulative basis, were the pre-crisis trends to remain unbroken, we would have added 487,600 residents between 2000 and 2017, instead of the actual addition of 394,500 over the same period. 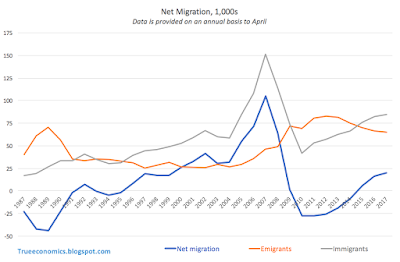 So things are improving and getting toward healthy, but we are not quite there, yet.
And there are other points of concern. Primary one is the fact that net inward migration remains negative for Irish nationals: in 2017, net outflow of Irish nationals fell to 3,400 from 8,700 in 2016. However, the figures continue to record net outflows for 8th year in a row. Over the period of 2010-2017, Ireland lost net 139,800 nationals.
On a positive side, there is net inflow of all other nationalities into Ireland, with non-EU nationals inflows jumping (net basis) to 15,7000 in 2017, the highest levels on record (albeit records only start from 2006). It is impossible to tell from CSO figures which nationalities are driving these numbers - a crucial point when it comes to assessing the nature of inflows. 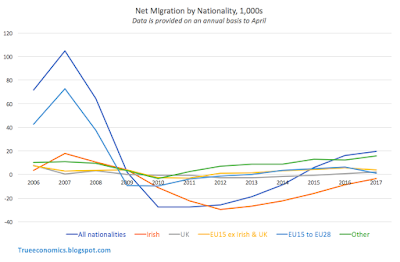 Final point worth making is a positive one: in 2017, Ireland recorded another year or growth in - already strong - net inflows of skills and human capital as reflected both in age demographics and educational attainment. By educational attainment, third level graduates and higher category of net inflows posted another historical record in 2017 at 23,600, topping 2016 record of 20,800. Since 2009, including the years of the acute crisis of 2010-2012, Ireland added net 61,000 new immigrants and returned migrants with third level and higher education. This is consistent with continued recovery in human capital-intensive sectors of the economy and is a huge net positive for Ireland. 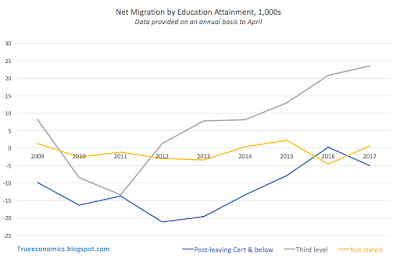 Hence, overall, the figures for migration are on the balance positive, although some pockets of weaknesses continue to remain and pose a challenge to the arguments about the breadth and depth of the recovery to-date.