Yesterday, in our class on Economics, we talked about the distinction between regulation (volume of rules) and efficient enforcement (monitoring, investigatory, enforcement and pre-emptive functions of regulatory authorities). As an example, we referenced the repeated chain of customer-level scandals at the Wells Fargo Bank.

Here is the latest scandal, unveiled earlier this week that I mentioned: http://www.zerohedge.com/news/2017-11-28/it-tuesday-time-another-banking-scandal. 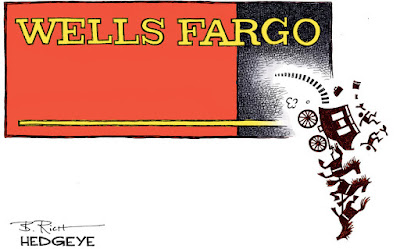 From our stand point, this case is really pushing the gap between regulation and enforcement out into new widths. Previous scandals, e.g. false accounts being created by bank employees, were harder to detect, pre-emptively, from regulatory point of view. The latest one was out in plain view for any supervisor/regulator to spot.

The bank signed a contract with its customers (standard terms of contract applying to all specified groups of customers) for ca 0.15% commission on foreign currency exchanges. The bank charged its customers (in 88% of all cases analyzed) higher fees, ranging to as much as 4%.

As ZeroHedge notes, this is absurd level of charges. And this charge comes on already absurd banks' spreads on buying and selling currency (so it is not the only charge customers pay). And yes, as ZeroHedge also notes, there are multiple service providers who do the same for much much lower fees. I use a service that charges me a flat rate fee of $1 for transaction, including transfers of money from one bank to another, plus exchange from one currency into another and trades currency at quoted market rates (average over 2 hours prior to transaction timing). So, in effect, I pay zero spread margin and my total cost of exchanging anything between $10 and $1 million is $1.00.  Were I to have used Wells Fargo services to do my last transaction, I would have paid somewhere around $29 more for the honor of wiring money into my Wells Fargo account than I did, judging by rates quoted to me for the date by Wells Fargo, as opposed to the rate I obtained from my service provider.

The only way the banks sustain the business model that provides them with such an opportunity to earn a huge profit off simple transactions is the model of monopolistic competition with price discrimination: the banks price their services at the high end of transaction cost in full knowledge that those of us who need the service often enough (like myself) will use other service providers, while those who use this service only infrequently will opt to pay higher price to avoid the cost of searching for better alternative.

But that absurd inefficiency of the services provided by the banks is a secondary point from our point of view. The primary one is the regulation in relation to consumer protection.

Let's face the music: the financial regulators receive data from the banks regarding their volumes of transactions carried out for customers in foreign exchange on a regular basis. They also receive the breakdown of costs and margins these transactions generated. It is a matter of excel-level algorithm to detect the discrepancy between the contractual 0.15% charge and the effective charge that - on the aggregate for Wells Fargo - would have been well in excess of 0.15%.

A red flag would have gone up at that stage. The timing to that would have been within one month (per reporting lags).

A sample of actual transactions could have been requested as soon as the flag was up and the actual fees charged could have been identified against the contractual fees. Assume that would have taken a lag of, say, another month.

Is any of this feasible in the current regulatory and monitoring environment? You bet. Why was it not done? Because there is no pro-active analytics of reported data when it comes to smaller scale transactions. And because the culture of regulation is based on the assumption that too-big-to-fail banks are too-big-to-mistrust.

Either way, Wells Fargo governance and strategy misfires continue to deliver new lessons for us all. The lesson this week is that when the regulators talk the fine talk about protecting the small folks, it is actually whistleblowers or the media or competitors who most often do the heavy lifting on this front - they do the enforcement bit of job that the regulators are de facto walking away from. Efficiency of enforcement, when neglected, undermines the promise of regulation, even when the latter is backed by volumes of rules.