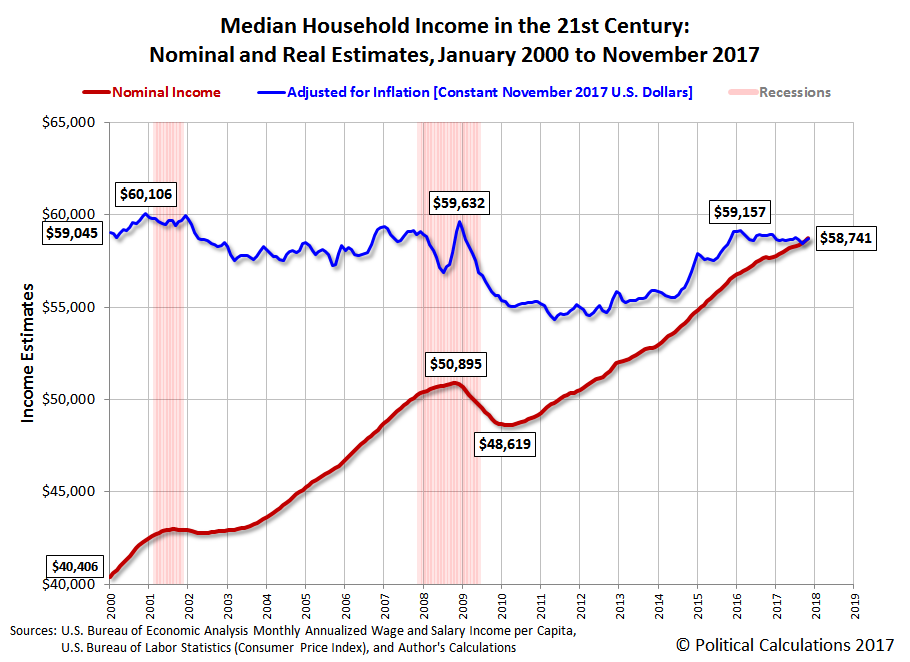 In nominal terms, which provide perhaps the best indication of the state of the U.S. economy for typical American households, median household income continues to rise steadily, much as it has throughout 2017 after having stalled in the latter half of 2016. Though our estimates from June 2017 through November 2017 are still preliminary, pending ongoing revisions, the data suggests that there has been a small uptick in the rate of growth of median household income in the U.S. during the period from September through November 2017.

After adjusting the monthly nominal household income estimates for inflation, so that they are expressed in terms of constant November 2017 U.S. dollars, we also find an uptick in so-called "real" median household income in recent months, which has come after this measure dipped sharply from July to September 2017. This period coincides with the impact of Hurricane Harvey and Hurricane Irma, which caused a short term spike in the prices of consumer goods and construction materials in Texas, Florida and in other states along the gulf coast, which has since largely dissipated.

The methodology for the approach we've developed to generate these median household income estimates is described here. In generating inflation-adjusted portion of the Median Household Income in the 21st Century chart above, we've used the Consumer Price Index for All Urban Consumers (CPI-U) to adjust the nominal median household income estimates for inflation, so that they are expressed in terms of the U.S. dollars for the month for which we're reporting the newest income data.

Next month, when we have the preliminary data for December 2017, we will make a spreadsheet version of our analysis available, which we are planning to periodically update on at least a semi-annual basis.