As (some) White House-linked (or favouring) economists lament the Fed's QE (and there are reasons to lament it), one thing is clear: the unprecedented monetary policies of the recent years have achieved two things:

Which, taken together, means that the rich got richer, and the middle classes and the poor got poorer. Because debt is not wealth. Worse, the policies past have set the stage for a massive unraveling of the credit bubble to come, if the Fed were to attempt to seriously raise rates.
Note: the figures below are not reflective of a reportedly massive jump in consumer credit in 4Q 2017 (see: https://www.marketwatch.com/story/consumer-credit-growth-surges-in-november-by-most-in-16-years-2018-01-08?siteid=bnbh).
Here is the latest data on personal household debt: 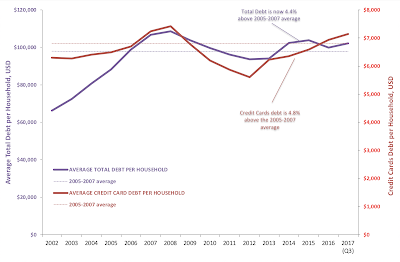 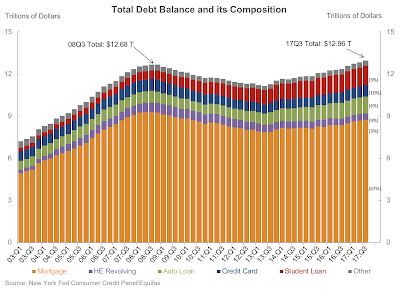 Year on year, 3Q 2015 growth in total household debt in the U.S. stood at 3.03%. This fell to 2.36% in 2016, before rising to 4.90% in 2017, the highest annual rate of growth for the third quarter period since Q3 2007.
Aggregate household debt in 3Q 2017, relative to 2005-2007 average was:
In current environment, a 25 bps hike in Fed rate, if fully passed through to household credit markets, will increase the cost of household credit by USD32.4 billion per annum. The same shock five years ago would have cost the U.S. household USD 28.3 billion per annum. Now, put this into perspective: current markets expectations are for three Fed rate hikes (and increasingly, the markets are factoring a fourth surprise hike) in 2018. Assuming the range of 3-4 hikes moves to raise rates by 75-100 basis points, the impact on American households of the QE 'normalization' can be estimated in the region of USD98-130 billion per annum. Since much of this will take form of the non-deductible interest payments, the Fed 'unwinding' risks wiping out the entire benefit from the recent tax cuts for the lower-to-upper-middle class segments of population.
Now, let's cry about the QE...