In Colorado, an electric utility's request for proposals to build new generating capacity resulted in stunning evidence that renewables are now cheaper than fossil fuels--even with storage capacity included for when solar and wind are "down."
This merely confirms that there is a boom in renewable energy underway, but judged from the perspective of the task at hand--putting the entire global economy on a renewable energy basis and eliminating the burning of fossil fuels altogether--this boom is merely a blip. Bloomberg New Energy Finance, which has been tracking global investments in the sector for the past ten years, reported that renewable energy investment in 2017 totaled $333.5 billion worldwide, up three percent from 2016. The 2017 numbers were the second highest yet recorded, and brought cumulative investment in renewables since 2010 to $2.5 trillion.

This may sound like a lot of money--and it is--but it should also be viewed in the context of fossil fuels being subsidized $1.9 trillion a year. And that number is from five years ago. According to a report from the International Monetary Fund in March 2013, governments around the world give $480 billion a year in direct subsidies. This is a worldwide amount, and it is not structured as you might expect: most of these direct fossil fuel subsidies are by governments in the developing world and are designed to make petro-products affordable for poor people. The remaining $1.4 trillion, according to the IMF, is the “externalities” cost of  “the effects of energy consumption on global warming; on public health through the adverse effects on local pollution; on traffic congestion and accidents; and on road damage.” A writer summarizing the IMF report noted that by "failing to make fossil fuel companies pay" for these externalities, "governments are implicitly subsidizing those companies. IMF calls this under-taxing of fossil fuels “mispricing,” but it’s easier to think of them as indirect subsidies."
But the amount actually needed to shift the entire world to renewables is $100 trillion. We could achieve that in 15 years with a slightly less than ten percent increase in annual world economic output--which would create the largest and most sustained economic boom in human history. That is an investment of just under $7 trillion a year. So, the $333.5 billion worldwide in 2017 needs to be increased twenty-fold.

This shows that a reliance on the conservative/libertarian/neoliberal ideology of free markets and private enterprise is woefully inadequate to what needs to be done. We need the activist role of national governments promoting and supporting economic activity that promotes the General Welfare, and discourages economic activity that is useless and often predatory, such as speculative trading in stock, bond, futures, currency and derivative markets. Contrary to the myths of conservatives and libertarians, this issue of the government actively steering the national economy in a positive direction was the central focus of the U.S. Constitutional Convention of 1787. The U.S. Constitution, its mandate to promote the General Welfare, and the entire history of How America Was Built, clearly shows that government of, by, and for the people, must supervise the building of an economy  of, by, and for the people.

This month, energy nerds are very excited about a utility bid solicitation.

Wait, hear me out. It really is exciting!

Usually, when we talk about how renewable energy will evolve in the next five years, we rely on analysts and projections. This is different.

When a utility puts out a request for proposals (RFP) — asking developers to bid in for the chance to build new energy resources — the developers who respond aren’t guessing, or boasting. They are laying down a marker that might get called. They are promising only what they are confident they can deliver.

That makes the responses to an RFP a clear snapshot of the state of the industry, relatively unembellished by ideology or public relations spin. This particular snapshot reveals that, on the ground, renewable energy costs are falling faster than even the most optimistic analyst had projected.

(Let’s face it: In most areas of life, when you look past the hype at the real numbers, it’s depressing. Renewable energy is one area where that typical dynamic is diverted. The closer you look, the better the news gets!)

First, a brief bit of backstory.

The utility in question is Xcel Energy, Colorado’s biggest, which serves 3.3 million electricity customers in the upper Midwest, Colorado, and New Mexico.

In 2016, Xcel released its Colorado Energy Proposal, which was news in itself. [1/18/18: see clarification at bottom of post.] The proposal would shut down two coal plants in the state and replace their output with roughly 700 MW of solar, 1 GW of wind, and 700 MW of natural gas by 2023. That would put Xcel’s Colorado energy mix at roughly 55 percent renewables. (Xcel’s reasons for ramping up renewable energy are complex — part price, part taking advantage of federal tax credits, part public sentiment.)

Based on that plan, in 2017 the Xcel subsidiary Public Service Company of Colorado issued an “all-source solicitation,” which amounts to the utility saying to private developers: “Here’s how much new power by 2023 we need. Whatcha got?”

At the very tail end of last year, while everyone was busy with the holidays, the company quietly issued a report on the results.

They were mind-blowing. An unprecedented number of developers came forward, eager to build renewable energy and eager to couple it with energy storage, all at unprecedented prices. It seems the people building this stuff are more confident than the analysts writing reports on it.

In Colorado, new renewables are cheap as hell, even with storage

Here’s a high-level overview of the bids and projects received in response to the RFP: 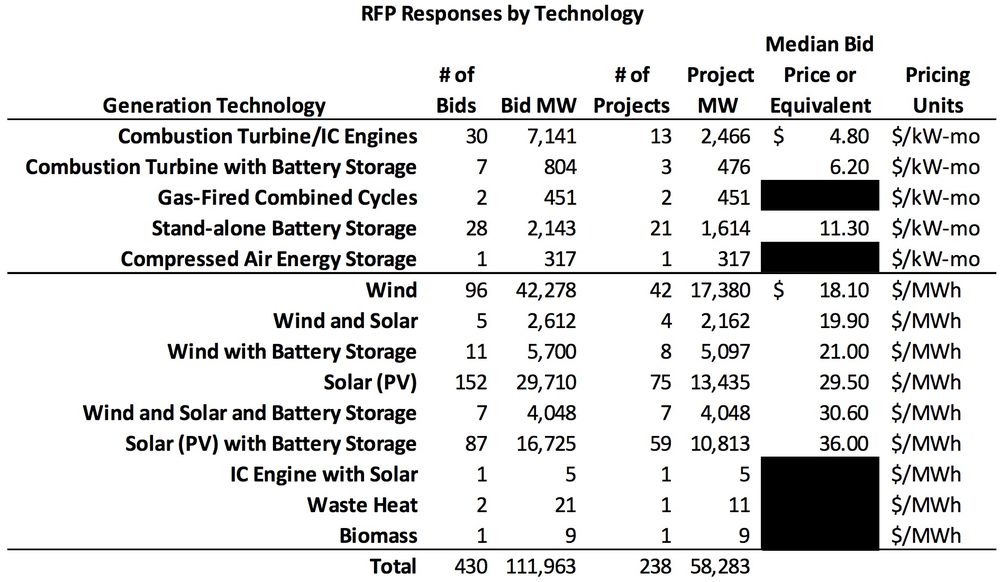 Xcel
This is about as striking as spreadsheets get.

A total of 350 of the bids involve renewable energy (134 for solar alone), representing more than 100 GW of capacity. Developers are chomping at the bit to build this stuff — partly to claim expiring federal tax credits, partly to claim market share in a booming sector, and partly just because they are human beings and excited about clean energy.

The big knock against wind and solar power is that they are variable — they come and go with the weather; they are not “dispatchable.” Critics say their low prices are misleading, because they must be backed up by “firm” capacity that can be turned on and off at will.

One way to make wind and solar more firm (ahem) is to attach storage, which can store excess production during the day when it’s cheap and sell it into the system at night when it’s more valuable. Storage extends the range of hours a renewable energy project is able to operate.

The problem is that adding storage adds considerable cost. But the Xcel bids show that is changing.

Here are a few comparisons to help put those numbers in perspective:

Colorado has excellent solar and wind resources, but it isn’t the only place where real-world bids are racing ahead of official estimates like Lazard’s. Saudi Arabia recently saw bids for utility-scale solar at under $20/MWh, which is less than half Lazard’s lowest estimate for the range of solar LCOE ($46/MWh).

At an auction in Chile last year, a solar+storage project won at $34.40/MWh, which is a third lower than the lowest Lazard LCOE estimates for solar alone.

A company called ViZn Energy Systems, which uses flow batteries rather than lithium-ion, is promising $27/MWh solar+storage by 2023, when the Xcel projects are scheduled to be online. By comparison, Bloomberg New Energy Finance projects an average LCOE of a little higher than that for solar alone in 2030.

What broad averages like LCOE can obscure is that the value of renewable energy (and storage) varies widely from place to place and market to market. In places with competitive procurement of energy (still a minority of energy markets in the world) and good renewable resources, renewables are crushing fossil fuels, even natural gas. Every market like that is a leading wedge, allowing the industry to scale up faster and drive down costs in other markets. This drives a self-reinforcing cycle that analysts looking at averages miss.

That helps explain why reports that focus on real-world projects (“bottom up” reports) tend to be so bullish on renewables. For instance, the latest report on renewable energy costs from the International Renewable Energy Agency (IRENA), drawing on 15,000 data points from projects around the globe, concludes that by 2020, “all the renewable power generation technologies that are now in commercial use are expected to fall within the fossil fuel-fired cost range.” That’s only two years away!

The Xcel RFP in Colorado is a relatively small signal, but it is one of many sending the same message: renewable energy is not “alternative” any more. Costs are dropping so fast it’s difficult to keep track. It is the cheapest power available in more and more places, and by the time children born today enter college, it is likely to be the cheapest everywhere. That’s a different world.