Wall Street certainly didn't have much in the way of negative thoughts with respect to the prospects for a federal government shut down last week. Even though White House Office of Management and Budget and interim Consumer Finance Protection Bureau director Mick Mulvaney gave a "between 50 and 60 percent" chance that the U.S. Congress would fail to reach an agreement to keep the entire government open as a legislative deadline neared, which was widely known well before the market closed, U.S. stock prices went on to close on Friday, 19 January 2018 at their highest level ever. 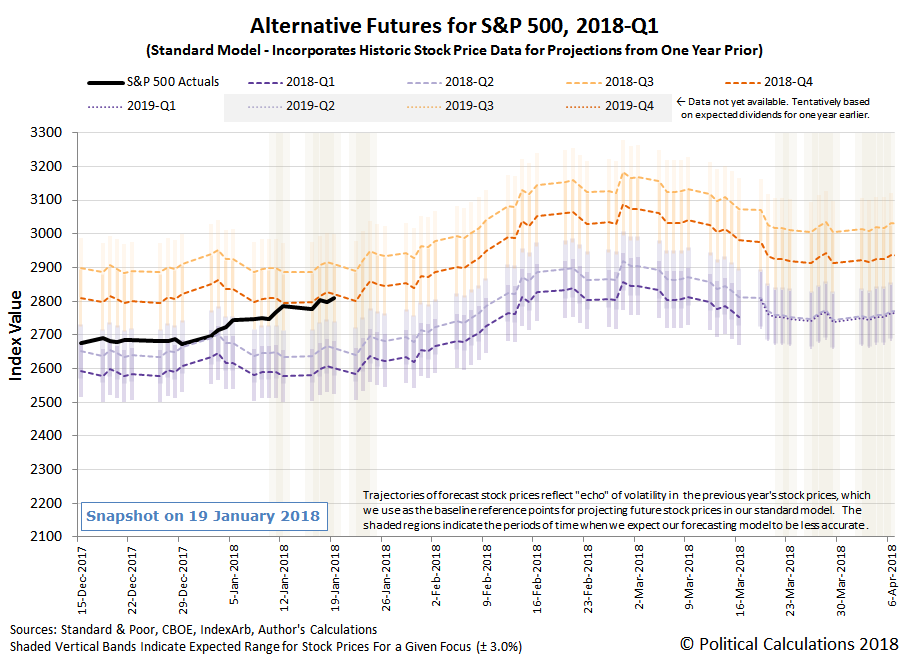 That's largely because where investors are concerned, politicians do little more than offer noisy distraction. Except for those very rare times where they might do something that actually affects the interests of investors, such as changing tax laws, it just isn't worth taking the time and energy to pay much attention to the things that grandstanding politicians say. Particularly where federal government shutdowns are concerned, seeing as there have now been no fewer than 19 since the passage of the 1974 Congressional Budget and Impoundment Control Act, which has made shutdowns like this latest one a recurring feature of how elected politicians choose to manage the U.S. government.

As for what things do attract the attention of investors, the trajectory of stock prices during Week 3 of January 2018 suggests that they are presently focusing much of their attention on 2018-Q4 and the expectations associated with that distant future quarter. Previously, we had thought investors might be splitting their focus between 2018-Q1 and 2018-Q3, but with the probability of a Fed rate hike occurring in 2018-Q3 now seemingly a low probability event, a shift in investor focus to 2018-Q4 appears to be a better explanation for what we're observing.

We should also note that the accuracy of our dividend futures-based model's projections are currently being affected by the echo effect from the past volatility of stock prices, which arises as a result of our model's use of historic stock prices as the base reference points for making its projections of the future. Here, since the magnitude of the current echo is relatively low, our model's projections for all alternative futures for the period from 11 January through 24 January 2018 are slightly understated from what they would be if no echo effect were present in the projections.

Taking that small understatement into account along with what we know about how far forward in time investors are looking, we find that the S&P 500 is tracking along the lower end of the range that we would expect they would if investors were closely focused on 2018-Q4 in setting today's stock prices, which frankly is not much different from what the unadjusted chart above indicates. To the extent that investors solidify their attention on 2018-Q4, we may have come to the end of the Lévy flight event that characterized the movement of U.S. stock prices during the first two weeks of 2018.

Regardless, outside of the better-than-even odds that the U.S. government would need to shut down a portion of its operations after Friday, 19 January 2018, there wasn't much notable in the news headlines of the third week of January 2018.

The Big Picture's weekly listing of all the positives and negatives that Barry Ritholtz saw for the U.S. economy and markets in the holiday-shortened third week of January 2018 is up!