Following its apparent contraction in January 2015, it appears that the U.S. economy continued to contract in February 2015.

We're basing that assertion on the number of publicly-traded U.S. companies that announced they would be reducing their cash dividend payments to their shareholders during the month of February 2015. With 38 companies taking that action, the number is lower than the 57 firms that took similar actions in January 2015, but is still well elevated above the number that would appear to correspond to a shrinking economy. 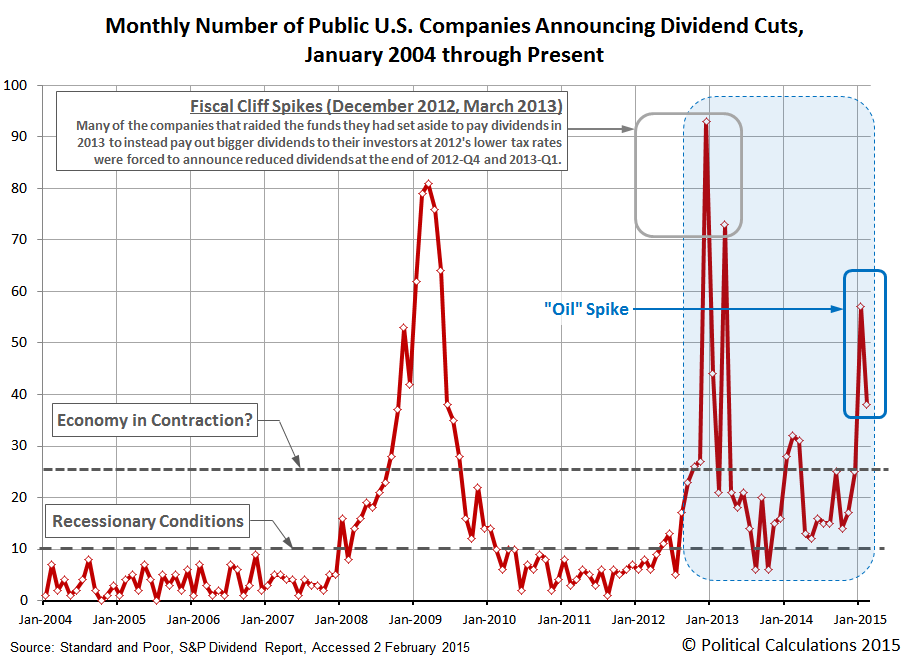 We believe that the number of companies cutting their dividends in February 2015 is a better indicator of the current level of distress within the U.S. economy than the higher January 2015 figure, because we suspect that earlier figure was elevated by those companies whose deteriorating business outlook was such that they should have acted to cut their dividends in 2014, but delayed until the new year.

Speaking of which, we think we've identified most of the entities whose stocks trade on the NYSE or NASDAQ stock market exchanges, using data from Seeking Alpha's Market Currents reports (filtered for Dividends) and the Wall Street Journal's daily listing of Dividends Declarations. The table below presents the full list that we were able to assemble from these sources:

The list predominantly consists of small, oil industry or other natural resource extraction-related firms, which is connected to the large and so-far sustained decline in global oil prices that began in July 2014 that has negatively affected their revenues. There are also a number of financial firms on the list that have also declined with these industries, along with a sprinkling of firms in other industries, such as software and advertising.

That these firms are small is a key reason why stock market indices have not followed suit. The dividend cuts represented by these firms simply are not big enough to even move the needle for market capitalization weighted indices like the S&P 500.

That is perhaps surprising considering how dramatically the index' expected future earnings per share through 2015 has changed over the past three months. However, that can be easily explained as most larger companies operate with greater margins of safety that allow them to absorb volatility in their expected earnings without cutting promised dividends, at least in the short term, which is why their stock prices haven't collapsed along with their projected earnings. Which is just what we should expect to happen since expectations for dividends per share, and not earnings, are the fundamental driver of stock prices.

So far, those cuts in expected future earnings haven't really transformed into cuts in expected future dividends. What they do represent however is a much more difficult business environment for the U.S. oil industry, where the distress is forcing dramatic cuts to extraction and to exploration activities, which is already negatively impacting other businesses that support the industry as these companies are instituting massive cuts to their spending as they struggle to remain solvent.

Under U.S. law, firms that will be laying off significant numbers of workers must provide their affected employees at least 60 days of notice in advance of the layoffs taking effect. Since January and February 2015 has seen many announcements of such mass layoffs in the industry, which will extend beyond mere oil workers, we should see a considerable increase in the number of Americans filing initial unemployment insurance claims in March and April 2015 should the recent rebound in oil prices not prove to be sufficient to forestall tens of thousands of pending layoffs in the industry.