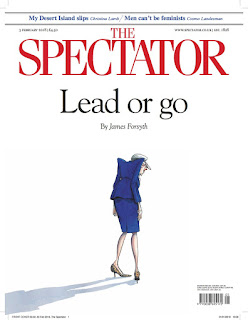 The conservative weekly "The Spectator" is influential - and widely read - in Conservative Party circles, so it can hardly be good news for May that its well-connected political editor, James Forsyth, has written the cover story under the stark demand that she "Lead or Go".

This debate doesn't seem to be getting any quieter, even as May is in China trying to secure trade deals.  The BBC's Laura Kuenssberg commented on the febrile atmosphere in Westminster on this morning's Today programme (here, go to 1:09:06 for Nick Robinson's start), noting that Tory MPs were daily changing their minds about May.

The problem for Tory MPs, as I noted below and here, is their risk-averse caution.  They don't want May but they hate the uncertainty of the alternative.  May's leadership is flawed from top to bottom, but the parliamentary part she leads is riven through and through with factional strife, resulting in a ghastly stasis that is tipping the party into a state of catatonic inaction.

Michael Oakeshott was the pre-eminent 20th century philosopher of conservatism, and his analysis of 1951 might bear some re-considering.  He described conservatives attitudes thus:

In political activity, then, men sail a boundless and bottomless sea; there is neither harbour for shelter nor floor for anchorage, neither starting-place nor appointed destination. The enterprise is to keep afloat on an even keel; the sea is both friend and enemy

Tory MPs today might want to consider whether they have taken to heart his final injunction:

The seamanship consists in using the resources of a traditional manner of behaviour in order to make a friend of every hostile occasion.

They are certainly facing a hostile occasion, but don't yet seem to have secured the resources to make a friend of it.  Very unconservative.