Watching the movement of the stock prices of individual companies change with respect to one another can be a lot like watching the flight of a flock of starlings.

Imagine, if you will, a flock made of the stock prices of the individual companies that compose a stock market index like the S&P 500 (Index: INX). A lot of the time, most of the individual stocks will move in the same direction as the overall index itself, which makes sense - a market capitalization-weighted index like the S&P 500 is going to tend to go in the direction that most of its component stocks are going.

But sometimes, a bird breaks away from the flock and flies its own course - almost independently of all the other birds. Which brings us to what the stock price of General Electric (NYSE: GE) has been doing since the middle of February 2018.

As it happens, the last time we talked about GE was back on 24 January 2018, right before the S&P 500 peaked on Friday, 26 January 2018 and embarked on a 10.5% correction, so we've been following its trajectory with respect to the index with some interest. The following chart shows GE flying a very different path than all the other birds of a feather flocking together in the S&P 500. 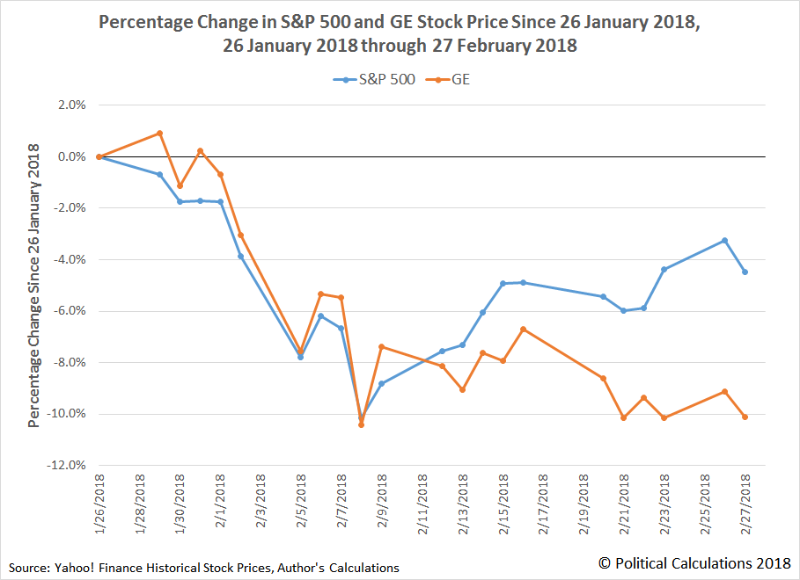 We're fascinated whenever we see the stock prices of companies striking out in different directions than the market indices in which they're grouped, where the divergence of GE, which has continued in correction while the S&P 500 has itself rallied and recovered a good portion of what it lost during the recent correction calls for some explanation.

To get that context, we mined news sources to identify stories that would have influenced investor perceptions of GE on the days where rather than tracking along with the S&P 500, it diverged from it, where we're looking at the period where the divergence between the two opened up to more than 2%. Here's a quick sampling of the bad news headlines that coincide with GE's flight path going onto such a different trajectory than the index as a whole:

For the first four gap-widening days, it makes sense that the news would negatively affect investor expectations for GE's prospects as an investment as the company is working to shrink in size, while still facing large and, as yet, undefined liabilities, where the reduction in revenues from selling its assets could negatively impact its business outlook.

The only real exception is 26 February 2018, although for the first hour after the market opened, it looked like GE might break to new lows below $14 per share. Instead, the stock went on to rally and reached $14.65 per share to close the day.

Why did GE rally on that day after such bad news about its earnigns had come out? Your guess is as good as ours, but if we have to come up with some coherent explanation for it, here it is. The bad news about the company's plans to restate its 2016 and 2017 earnings that came out over the preceding weekend was really news about the past - not the future. When making investment decisions, investors always focus on the future, where what the company announced didn't much alter the expectations for GE's future prospects. So GE's stock price recovered to the level that it might reasonably have been projected to go if the news of the restated earnings hadn't happened at all.

All we know for sure is that like watching a flock of starlings execute a synchronized turn, how stock prices in an index change with respect to one another or to the index as a whole can be equally fascinating.