It has been a long week and a half since we closed out our month-long red zone forecast for the S&P 500. Since then, investors appear to have briefly flirted with focusing their forward-looking attention on 2018-Q2 in setting stock prices, but that didn't last very long, where in the second full week of March 2018, they would appear to be splitting their attention between 2018-Q2 and the much more distant future quarter of 2019-Q1. 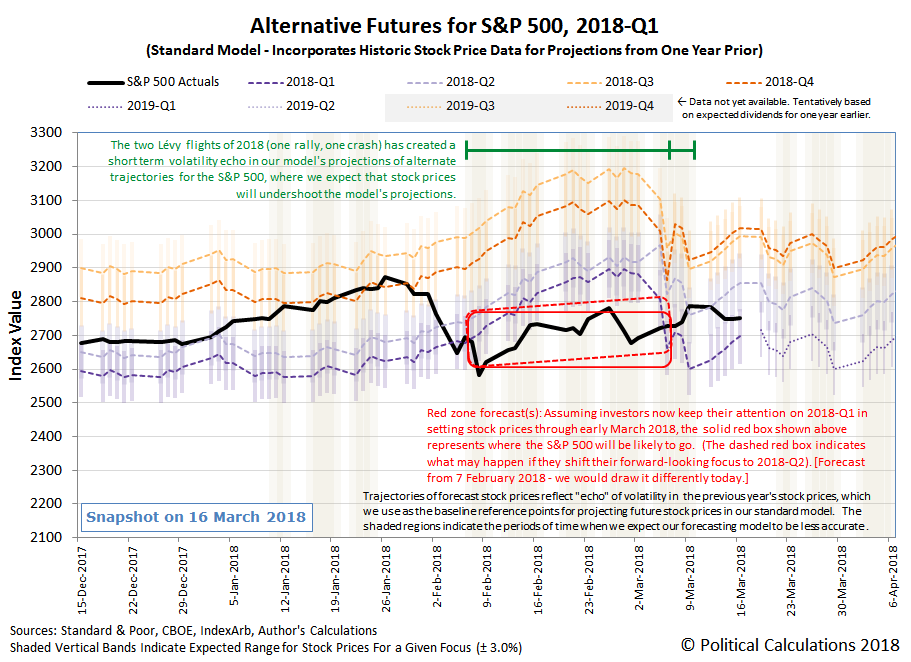 It has been pretty quiet week on the FedWatch front during all that time, which is attributable to Federal Reserve officials going into a news blackout period ahead of the Federal Open Market Committee's two-day meeting in this upcoming week, which will conclude on Wednesday, 21 March 2018. At this point, investor expectations of a quarter point rate hike being announced this week are all but locked in, where investors are anticipating at least two more quarter point rate hikes to be announced in the next six months, before the end of each of the next two quarters.

That marks a change in expectations, where previously, investors had expected three rate hikes in 2018, but in the first, second and fourth quarters, as opposed to occurring in the first, second and third quarters as they are now anticipating. At the same time, expectations of an additional quarter point hike in the fourth quarter are building, but as yet, have not reached the level where investors are giving at least a 50% chance of that happening.

With Fed officials clammed up during the past 10 days, investors had little more than news headlines to catch their attention. Here are the potentially market-moving news items that caught ours....

For those keeping track, Barry Ritholtz found that the positives outweighed the negatives for the U.S. economy and markets in the first full week of March 2018, and that the they balanced each other during Week 2 of March 2018.

We're making a point of noting the major international trade-related headlines, where U.S. President Trump's planned tariffs are certainly getting lots of attention, but through the first half of March 2018, we'll agree with Goldman Sachs' assessment that stock prices really aren't reflecting much of a concern over the probability of a broad trade war. Despite what the headlines are indicating, what we are seeing so far is mostly consistent with the typical levels of noise that have historically characterized the day-to-day volatility of stock prices. We'll continue paying attention to both trade headlines and stock prices to see if that apparent investor response continues.