Washington Centre for Equitable Growth has recently published a new modified version of the neoclassical model attempting to explain a number of empirical facts. A paper by Gauti Eggertsson, Jacob A. Robbins, Ella Getz Wold, titled “Kaldor and Piketty’s Facts: The Rise of Monopoly Power in the United States” (February 2018: http://equitablegrowth.org/working-papers/kaldor-piketty-monopoly-power/) departs from the empirical observation that the empirical facts of the real economy can be reconciled with in contrast to the traditional neoclassical models. Specifically, per authors:

The paper then modifies the standard neoclassical model. The authors introduce a market concentration distortion: “an increase in monopoly profits, [coupled] with a decrease in the natural rate of interest”.

To justify this, they, first, “depart from perfect competition, and posit that market power allows firms to make pure profits”. Second, authors assert that “there are barriers to entry, which prevent competition from driving these profits to zero.” This is consistent with the proposition that we are witnessing increased pressure of monopolistic and oligopolistic competition in the U.S. economy, as covered by me in a range of previous posts and articles.

“Third, claims to the (nonzero) pure profits of firms are traded and priced, and the ratio of the market
value of firms (which includes the rights to pure profits) to the replacement value of the productive capital stock is permanently above one; this ratio is commonly known as “empirical Tobin’s Q”.” Note that the tradability of pure profits of the firm (as opposed to rents on capital) is a distinct part of the model. Traditionally, we think of stock markets valuations as reflective of economic rents, not pure profits. That is so, because we assume that over the longer run, pure profits are driven down to zero. However, if/when pure profits are non-zero, stock market valuations are reflective of both: capital rents (low, due to extremely low cost of credit), plus pure profit (high, due to the transfers from interest rate subsidy from labor and technology logical capital to financial capital via pure profit monetisation, plus, dare I say it, the monetary policies excesses of the recent past). 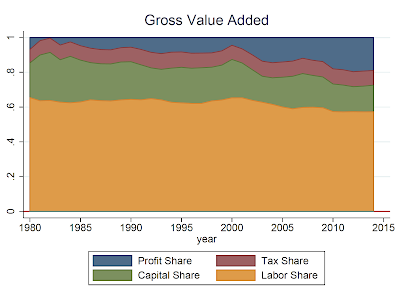 Now, the authors confine their explanation for market power perpetuation to the following: “Because of the barriers to entry, the assets which hold the rights to the pure profits are non-reproducible: unlike productive capital, individuals cannot recreate these assets through investment, they must instead purchase them from others.” Personally, I would agree that barriers to entry - formal ones, e.g. via licensing and regulation - are one part of the problem. But there is a more direct problem arising in the American economy as well: concentration driven by pure monopolistic differentiation (see buy post on this here: http://trueeconomics.blogspot.com/2018/03/28218-san-francisco-fed-research.html, and here: http://trueeconomics.blogspot.com/2018/02/7218-american-wages-corporotocracy-why.html, and here: http://trueeconomics.blogspot.com/2018/02/9218-angus-deaton-on-monopolization-and.html.

Here’s the authors’ argument: “The reason for this result is closely connected to the non-reproducibility of the assets which hold the rights to pure profits. When the economy is shocked, the price of these assets show large fluctuations, because their supply is fixed. In comparison, there is less fluctuation in the price of productive capital, since the supply is not fixed and it can be produced through new investment; the variance of the price of productive capital is determined in our model by the level of capital adjustment costs. As the economy transforms from one in which the majority of assets by market value are productive capital into one dominated by pure economic rents, this generates an endogenous increase in risk premium.” 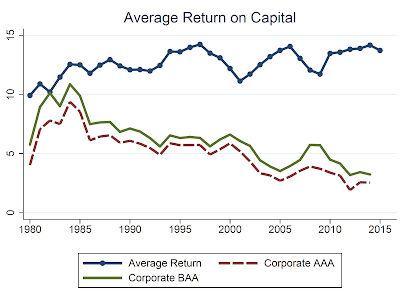 I do not buy this argument AT ALL. Let me explain. Non-reproducibility of these assets is a pure, unadulterated nonsense. We used to have Microsoft (a monopoly) and then we got Google (another monopoly), then we got FAANGS (more monopolies), and so on. If anything, rising concentration of the S&P 500 at the hands of larger, monopolistic issuers strongly suggests not only that the monopolistic assets ARE reproducible, but the our financial markets are solely preoccupied with reproducing them. Behold the ‘unicorns’.

The real driver for the abnormal (pure profit-linked) returns is the very existence of that pure profit, driven by: (a) regulatory barriers to entry (think banks), (b) state subsidies (think Tesla), (c) market macrostructure (think Google and Facebook), (d) rampant rent-seeking (think all), (e) outdated anti-trust regulations (think the U.S. system dominated by only one consideration, that of the material harm to consumers, that ignores the fact that modern ICT services are NOT your typical transactions, and involve a barter-type set of transactions between consumers and, say, Google). Majority of these drivers are reinforced by the selectively ultra-low cost of funding for the monopolistic competitors, available courtesy of the rounds and rounds of global risk-mispricing, aka, QE.

Despite the above shortcomings, the paper is an important one. Its conclusions are succinct and far-reaching. “There are a number of reasons why we argue for this hypothesis (i) there is a wide variety of confirmatory evidence that concentration, profits, and markups have increased over the time period, while the natural rate of interest has decreased (ii) it is parsimonious, in the sense that we use two data series (markups and interest rates) to explain the movements of 5 separate trends (iii) our model does not generate counterfactual implications.”

“In this paper, we argue that these trends can be explained by an increase in market power and pure profits in the US economy, i.e., the emergence of a non-zero-rent economy, along with forces that have led to a persistent long term decline in real interest rates.” Whatever your views on the causal factors might be, the dangers inherent in this systemic dismantling of the competitive, open, entrepreneurial model of the American economy of the past is a major source of future risks, uncertainties and social risks.