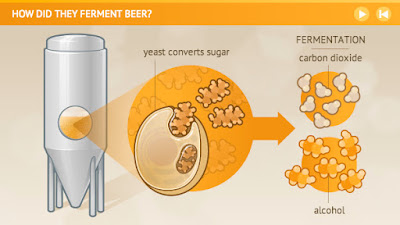 The basic process of making beer goes back hundreds, if not thousands, of years. It starts when brewers add yeast to wort, which is a mixture of grain, flavoring agents and water that have been prepared to maximize their sugar content. The mixture is then stored away in a closed container, where the yeast goes to work to convert, or to ferment, the sugar into alcohol, carbon dioxide and other products, which become what we know as beer.

In recent centuries, brewers have taken to adding the flowers of the hop plant to their beers during the brewing process to add additional flavor, which often gives them a citrusy, floral, or bitter character that many beer drinkers crave.

Alas, for craft brewers, obtaining high quality hops can be a problem, where the water-hungry plant has been in short supply in recent years.

That's where today's invention comes into play, because a team of biologists led by Charles Denby at the University of California-Berkeley have developed a method to give a beer all the flavor of hops, without using any. Their secret? Use CRISPR technology to modify genes in yeast so that it can provide the flavor profile that is traditionally obtained by hopping the beer as it is brewed:

To achieve this, the researchers inserted four new genes, as well as the promoters that regulate the genes, into industrial brewer’s yeast using the gene editing tools. Linalool synthase and geraniol synthase—two of the genes used that came from mint and basil—code for enzymes that produce flavor components common to several plants....

Two other genes from yeast boosted the production of precursor molecules required to make linalool and geraniol—the hoppy flavor components.

All the genetic components—the Cas9 gene, four yeast, mint and basil genes and promoters—were inserted into yeast on a tiny circular DNA plasmid. The researchers used the yeast cells to transplant the Cas9 gene into the Cas9 proteins, which cut the yeast DNA at specific points. Yeast repair enzymes were then spliced in the four genes and promoters.

Brewers need at least 50 pints of water to grow the hops needed for each pint of beer. They also need fertilizer and energy to transport the crop, making cultivating hops for beer an expensive process.

But by engineering yeast to do the job of hops in flavoring beer, they can reduce the demand for water that now goes to growing hops to support beer production while still delivering the kind of final product that consumers enjoy.

We know that, because they put it to a taste test after getting clearance from an Institutional Review Board (IRB):

After IRB approval (you have to love science), 40 dedicated employees of the Lagunitas Brewing Company (28 males and 12 females), ages 20 to 50 with 2 to 154 tasting episodes annually participated in the evaluation. They were provided 5 2-ounce pours consisting of 1 control, three various genetically modified yeast beers and one blind control and asked to rank the tastings on a 9 point scale. They determined “that the finished beers exhibited a range of hop flavor/aroma intensity” or as Bryan Donaldson, Lagunitas’s innovations manager found “notes of ‘Fruit Loops’ and ‘orange blossom’ with no off flavors.”

It's a brave new world. As for what CRISPR is and how else that technology might affect the future for beer, be sure to watch the following video from Engadget: