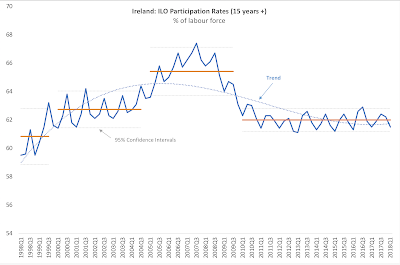 As the chart above shows, despite low and falling unemployment, Irish labour force participation rate remains at the lows established at the start of 2010 and is not trending up. In fact, seasonal volatility in the PR has increased on recent years (since 1Q 2016), while the overall average levels remain basically unchanged, sitting at the lowest levels since the start of the millennium.

While demographics and education account for much of this, overall the conclusions that can drawn from this data are quite striking: per each person staying out of the labour force for various reasons, Ireland has fewer people working or searching for jobs today than in any comparable (in economic fundamentals terms) period.