When we're not solving economic or finance puzzles, we often turn our attention toward fighting crime. Recently, we have been following the case of the mysterious death of an unknown woman in November 1970, through the BBC's fantastic podcast series Death in Ice Valley.

Known as the "Isdalen Woman", or the "Ice Valley Woman", after the isolated location where her body was found by two schoolgirls outside Bergen, Norway, the woman's true identity has never been identified. That's mainly due to her use of multiple identities, including passports, that she utilized as she traveled throughout Norway and western Europe in the year preceding her death from unusual causes, which are part of an extraordinary set of clues that she left behind before she died.

Even the nature of her death is something of a mystery, where there is evidence to support that she either committed suicide in a very unusual fashion or, perhaps more likely, was murdered. As for how she lived, it is quite possible that she was involved in an espionage or crime ring, where her activities and travels within Norway became a focus for Norway's secret police.

One of the clues she left behind was a page of coded notes, which was found in a suitcase that she had stored at a railway station in Bergen just days before her body was found. Here's a photo of the page in question: 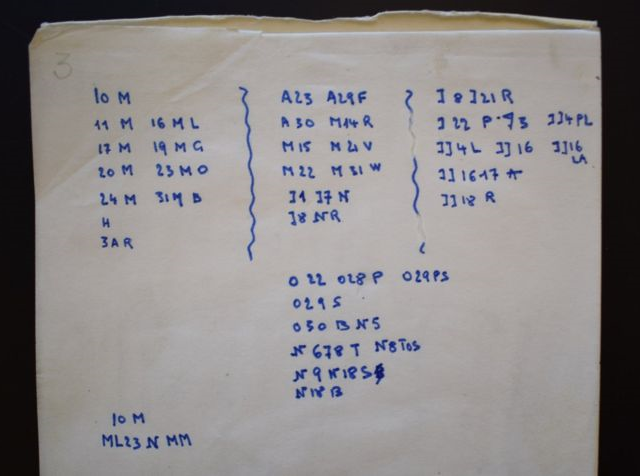 One of Norway's cryptographers was able to decipher a portion of the page, where he was able to identify a pattern that the Isdalen Woman used to record dates and some of the locations to which she traveled within Norway in 1970. Since we have a little bit of experience in working with old codes, we thought it might make for an interesting challenge to see if we could translate more of what would seem to be an informally-encrypted coded travel itinerary.

We've divided the page into zones, following the apparent chronological order. We assume all dates fall within 1970:

We think the Isdalen Woman is primarily traveling relatively short distances by either rail or by ferry rather than flying, given the high expense for that mode of travel in that era. So rather than flying from Ghent to Oslo, as might be done today, we think she's traveling by train to Hirtshals, Denmark, then taking a ferry across to Larvik, Norway before concluding her travel in Oslo (in fact, we had originally though the L and G in the first two destinations might stand for Larvik and Grimstad in Norway based on the path that she appears to have taken out of Norway, but have since refined our thinking). We also think her travel outside of Norway is primarily focused where she can either speak the language or can get by with the languages that she does speak relatively easily, where evidence suggests that she spoke German, French, Dutch, and to a much more limited extent, English.

The notes here are interesting in that she changes her pattern for recording dates. Instead of the typical European convention of Day Month, she changes to Month Day. Perhaps more interesting, we think its possible that she's evolving the code so that it would make sense in the context of her travels, where she may be reusing "R" to represent both Rotterdam, as in the previous section, and possibly Regensburg, which would make sense if she's traveling by ground between Frankfurt and Vienna, before going back to use "R" to indicate Rotterdam at the end of this section.

As a side note, we came up with Nuremberg as a destination in her itinerary before the podcast episodes revealed the modern forensic evidence that indicates that she may very well have lived her earliest years in that portion of Germany. As for her travel in this period, given the Cold War that was going on between western Europe and the Soviet Union, where traveling between a NATO country and a Warsaw Pact country would almost certainly have raised red flags, we don't believe that she would have risked traveling to an eastern bloc "W" destination like Warsaw, Poland, which is why we looked more to Wels, Austria as the likely destination.

What we think is her travel to Vienna, Austria however does suggest a possible link to espionage. Since Austria was neither a member of NATO nor of the Warsaw Pact, Vienna became something of a hub for international espionage during the Cold War. Coincidentally, the city of Rotterdam, Netherlands served a similar function during the first World War, and did so to a lesser extent during the interwar period until the Germans overran the country during the second world war.

We wouldn't describe these notes as encoded so much as being a kind of personal shorthand. As a case in point, check out the Isdalen Woman's attempt to write a stylized "J" to differentiate July from June in her notes, where we're pretty sure that she decided it doesn't work. Almost immediately in its place, we think she chooses to substitute a double-J, or "JJ", to indicate July.

Considering her travel again, in a lot of ways, it wouldn't be a stretch to substitute London, England for Luxembourg in this portion of her itinerary. It's certainly accessible to the Netherlands via ferry through Harwich, England, but we're erring in favor of Luxembourg again.

There's a large time gap before the next section of her coded itinerary.

We think that her travel from Paris to Stavanger may be one of the few occasions where she may have traveled by air, which would be an exception to her apparently preferred method of traveling by rail or ferry.

The next section is perhaps the most mysterious entry, where we've had to apply more than a little bit of speculation....

If you look at the position of this note with respect to the main body of her coded itinerary, its position off to the side suggests that this last travel is literally a side trip.

Here, we've assumed that she is traveling locally through small towns that are near Bergen, Norway, adjacent to the region where her body found in Isdalen Valley. We also think that she's re-using her double-letter trick, although this time, to differentiate a location rather than a date.

The most curious thing though is the repetition of "10M", which had previously indicated the beginning of her coded travel itinerary, where repeating it here in connection with what would seem to be her final trip suggests that she may have known she was nearing the end, where she's purposefully connecting the end back to the beginning.

Her body was discovered on 29 November 1970. Nearly 48 years later, nobody knows who she was or why she was crisscrossing Norway while traveling under so many assumed identities.

There's a lot more to the mystery of the Isdalen Woman. If you're interested in finding out more, the BBC produced the following video to go with the first episode of the podcast series:

The series also has a Facebook group devoted to it. A 2017 article about the case also provides a good overview and photographs of the evidence that was collected in the original investigation.

If you haven't heard the series, perhaps the biggest twist comes in Episode 8, where the results of modern forensic analysis opens up a very new avenue for investigators to pursue in tracking her identity. The series consists of 10 episodes, which are available here. So if you were looking for a good mystery with a lot of twists and turns this summer, this true life case may fit the bill!