Suppose, for a moment, that the U.S. economy was hemorrhaging jobs, but that fact was completely missed by the U.S. government's official employment situation reports. Would you say that something was perhaps awry in the data? Or would you foolishly leap straight for the tin foil to make a new hat as you cried "conspiracy!"?

With those questions in mind, let's consider one issue that has been perplexing ZeroHedge's Tyler Durden in recent weeks:

A month ago we asked if the "BLS Forget To Count Thousands Of Energy Job Losses" when as we showed, the BLS reported that only 1,900 jobs were lost in the entire oil and gas extraction space, which was a vast underestimation of what is taking place in reality, when compared to not only corporate layoff announcements, but what Challenger had reported was going on in the shale patch, when it calculated that some 21,300 jobs were lost in January in just the energy sector.

Today we ask again: did the BLS once more forget to add the now tens of thousands of jobs lost in the US energy sector? We ask because the divergence is getting, frankly, ridiculous.

But are the BLS' data jocks really missing that data?

Casey Mulligan has worked up the numbers and wonders if the U.S. job market for adults has really been shrinking recently:

The headline payroll employment was (seasonally adjusted) higher in February than in January. However, the headline does not include the self employed or agricultural workers. If we add those in (from the household survey), the number of jobs fell from Jan to Feb. If we also look at it per capita terms, jobs per capita fell two months in a row after being essentially constant Nov-Dec.

Jobs in Thousands through Feb 2015 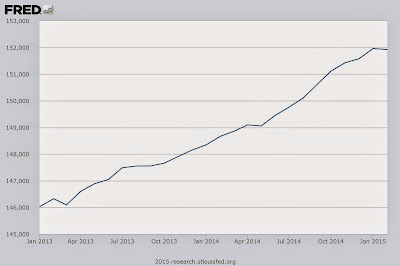 Jobs per Adult through Feb 2015 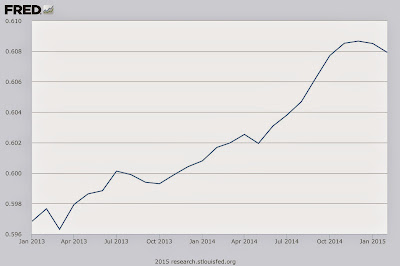 To be clear, I am measuring the vast majority of jobs from the same establishment survey that makes headlines. All I'm doing is adding an estimate for the narrow category of workers known to be excluded (in terms of FRED series, my formula is PAYEMS + LNS12027714 + LNS12032184). Interestingly, self employment fell 340,000 in the past month and 238,000 over the past year.

We think we can explain part of what Professor Mulligan is seeing in the data, and also solve the mystery that is perplexing ZeroHedge's Tyler Durden.

The key to resolving Tyler Durden's mystery and Casey Mulligan's jobs data is to recognize that 84% of workers in the U.S.' oil, gas and mining industries are employed as independent contractors, who are not counted as being actual employees of the firms that have announced they are laying off workers.

Instead, as workers who get 1099 forms as contractors instead of W-2 forms as employees from the firms that employ them for filing their federal income tax returns, they are considered to be self-employed.

As such, many job losses that might be resulting from the ongoing simultaneous declines of global oil prices and extraction-industry-related business revenues would not necessarily be captured in the nonfarm payroll data, because they're really being counted as self-employed, who aren't counted as part of the nonfarm payroll.

Unless one does exactly what Casey Mulligan has done - add the number of farm workers and self-employed individuals to the non-farm payroll numbers to get the bigger picture.

But that's not because the BLS isn't counting them - it's because their definition of the nonfarm payroll isn't sufficient to capture the particular dynamic playing out in the nation's oil, gas and mining industries. Or for that matter, any other industries with high percentages of self-employed independent contractors.

And that situation isn't just limited to the nonfarm payroll data. Many of these independent contractors being laid off from their jobs would not be eligible for unemployment insurance benefits either, so the data for first-time unemployment claims is also unlikely to register their displacement from the U.S. labor force until the numbers reach deep into the actual payrolls of these firms.

So call it what it is: a "hidden" recession!

Bernardt, Annette. Labor Standards and the Reorganization of Work: Gaps in Data and Research. University of California-Berkeley Institute for Research on Labor and Employment. IRLE Working Paper #100-14. January 2014. [PDF Document].