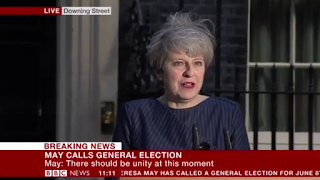 There seems to be a popular liberal narrative emerging about the present state of British politics which is largely summed up by (1) the Tories have got us into a mess over the past couple of years and (2) they, especially Theresa May, should apologise for getting Britain into this mess.

There may be a number of things Mrs. May needs to apologise for - a poor campaign, an overly insular leadership style, the loss of a number of Conservative seats - but all these apologies need to be directed purely at the Tory party that she leads and its candidates.  Further, an acknowledgement that she has learned lessons from the election and will seek to adapt her premiership to suit those would be helpful and politically adept.  But an apology to the country?  What a fruitless, pointless, unnecessary exercise that would be.

I presume the apology in question that liberal commentators have in mind would be along the lines of saying sorry for calling an election.  Really?  In a democracy?  The election may have been called for opportunistic and rather venal reasons, but the idea that we should somehow ration the amount of democratic engagement at the polls that the people should participate in is ludicrous and reeks of political class elitism. Mrs. May's motives in calling the election may have been ever so ignoble, but in the end she remained at the mercy of the voters.  Hubris did indeed come to rest at her door as a result, and she may wish to ponder many lessons from this, but we should not be demanding apologies from a wounded leader for the decision delivered by the people in an election.

Neither should there be an apology for calling another election in a few months if one is needed.  We are a democracy.  It is the people's right and responsibility to hire and fire their political leaders, and if that has to be done on a more regular basis until the people become satisfied with their collective decision then so be it.

There is an extraordinary feeling afoot, and it is embedded in the post-election liberal narrative, that calling elections too often is a Bad Thing.   We may be a democracy, harbouring rights that have been fought and argued for over many decades and which are still denied to the majority of people in the world, but we really shouldn't ask people to listen to political debate and hobble along to a polling booth too often.  It is the ultimate elitist nonsense, and it caters to a terrible view which suggests that we should cravenly give in to the anti-politics brigade who believe that a national political discussion shouldn't be allowed to get in the way of everyday lives to often.

This is the same view that we hear expressed about the referendum held last year which led to the Brexit process.  Now as it happens I am no fan of referendums, but I can't deny that they are the ultimate expression of the popular will on a particular issue.  It is a virtue of democracies that the popular will for change doesn't need expression in a revolution because it has a ballot box to use.

The sub-text of much of this criticism, of course, is that the vote didn't go as liberal commentators wanted.  Rather than blame the people, however, it has become easier - though a lot more cowardly - to lay the blame at the feet of the leaders who dared engage the people in such a momentous decision.

If there is a "mess" in British politics then the responsibility lies squarely with the voters.  They have had the chance, more than they have ever had before, to direct events.  They have chosen to do so in a messy and sometimes indeterminate way.  But that is democracy, and we get the one we deserve because we are intimately involved in it.  Don't like the leaders?  Then do more than just vote.  Do more than just write well-paid columns about how bad it all is. Take some responsibility and get involved.  Stand, argue, persuade.

As it happens, I don't think the result of Thursday's election was a bad one.  It has yielded a humbled government, more willing to moderate its previously inflexible approach on Brexit, more willing to operate on a collective basis, more willing to appreciate the aims and aspirations of the voters who chose to withdraw their support.  This is what democracy should do.  The voters also, by a smidgeon, determined that they wanted the same government to continue in office.  For all his and his allies' blow-harding, Jeremy Corbyn didn't win and has no chance of forming a government with the present parliamentary make-up.  He hasn't got the numbers.  Because the voters didn't give him the numbers.  And yes, the DUP do actually count as a legitimate party.  Enough people in a part of the UK voted for them to send ten of their representatives to parliament.  They get the same rights as every other representative and that is the right, under the full scrutiny of voters who will be asked to deliver another verdict again at some point, to support or deny the biggest party its political programme.

This isn't a "mess".  It's democracy in action and I'm sorry so many liberal commentators aren't very happy with it.  It doesn't require an apology from the prime minister.  The only people you can demand an apology from are the British electorate, and they are simply exercising the right hard won by their ancestors to nudge the government whichever way they want.  Live with it.