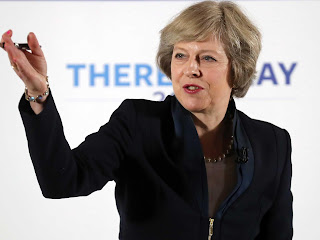 1.  Don't take the electorate for granted.  Theresa May's party (she abdicated the Conservative name for the duration) did this twice.  It assumed everyone would ignore the opportunistic nature of the election, and that they would then happily respond to a patronising campaign of empty slogans.  Turns out they didn't.

2.  Every vote matters, even under First Past the Post.  Young voters complained about Brexit, but their complaints carried little weight given the fact that many didn't vote in that ill conceived referendum.  This time they voted, and the change has been palpable.

3.  Traditional campaigning still matters.  Theresa May's party thought they could win this with a big data machine and by programming, without variation, key phrases into the political dialogue.  They thought they could avoid real voters with impunity, whether in televised debates or in the streets.  Jeremy Corbyn suffered a media monstering, but built up support through a consistent round of old fashioned rallies.  Crowds matter, it seems, and he was able to appeal to a decent proportion of the electorate through these rallies.  We're a democracy, and he met people.  Somehow it seems to work.

4.  Manifestos should not be insulated efforts.  Whatever the fine aims of Theresa may's manifesto, it was drawn up quickly by a tight group of May loyalists who failed to road-test it within the wider party.  It then backfired.  Surprised?

5.  Leaders should be able to campaign.  As everyone is noting, this election was entirely the product of Theresa May's desire.  There was no reason at all to call it, and certainly not the one she gave.  In consequence, though, one might have expected her to show some campaigning vigour and ability.  Alas, when calculating her election gamble, she failed to factor in her own dislike of campaigning.

6.  When you have a venerable party with all its traditions and brand, use it.  Theresa May's team confined the party name to a footnote and insisted that all of her candidates do the same on their official campaign literature.  Prospective MPs once called Conservatives simply became people "standing with Theresa May".  Once the electorate decided they had their doubts about Theresa May, there wasn't anywhere else to turn.

7.  We are a parliamentary system, not a presidential one.  See 6 above and remember that for all the dominance of party leaders, constituency candidates do still stand on their own merits as well.

8.  The "vision thing" still matters.  When all was said and done, there wasn't much of a discernible vision behind the May campaign.  "Brexit means Brexit" was as empty a slogan as has ever been uttered on a campaign trail, coming as it did with absolutely no enhancing narrative or vision at all.  Compare that with Labour's ability to appeal to a range of people with a clear vision of what needed to be done for Britain.  Agree with it or not, it gave the impression they were thinking about what to offer.

9.  Personalities are important.  Theresa May would have obviously been a dominant figure even without the quasi-presidentialism of her campaign. just as Jeremy Corbyn was on the other side.  The problem for May is that she failed to project any warmth or spontaneity and appeared to actively avoid contact with ordinary voters.  In a modern democracy it isn't possible for a leader to survive without a decent skill at communications.  May utterly lacked that.  Contrast her with the cheerful and positive Ruth Davidson, leading something of a Tory revival in Scotland.

10.  Is politics being re-set?  There is a case for this.  The election has seen the return of two-party politics, the effective icing of another Scottish independence referendum, and the likelihood of a more pragmatic, Europe friendly Brexit.  Are we coming through a nightmare period, for all the veneer of chaos that exists today?