Italy has been the testing ground for the European regulatory framework for resolution of insolvent banks for several years, running. In all past sagas, the framework has been shown to fall short of protecting the taxpayers from the risk contagion loops that dominated the banking sector insolvency resolution regimes during the Global Financial Crisis. And the latest problem bank, Carige, is no exception.

Per latest reports (https://www.ft.com/content/b9fe3384-1427-11e9-a581-4ff78404524e) the Italian Government is pushing toward nationalization of the troubled lender in need of at least EUR400 million in fresh capital - capital it can't raise in the markets. The Government is also set to guarantee new bonds sold by Carige.

Carige assets of ca EUR25 billion are set against current capitalization of just EUR84 million. Per V-Lab data, Banca Carige is suffering from a massive spike in liquidity risk, with illiquidity index (a measure of liquidity risk) spiking to its highest levels in more than 21 years: 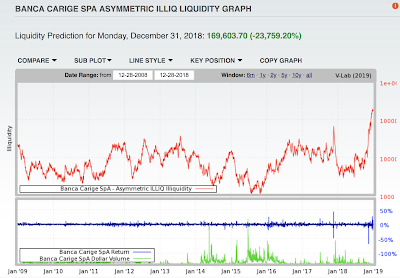 In late December, the ECB has taken the unprecedented step of placing Banca Carige in temporary administration, with administrators given three-month mandate to reduce balance sheet risks and arrange sale/merger/takeover of the bank. As a part of this work, the administrators are trying to review the Italian Government guarantee (issued in December) that led to the Italian deposits guarantee fund (FITD) purchasing EUR320 million of Carige's bonds.  In a notable development, the purchased bonds are potentially convertible into equity in an event of Carige's capital levels falling below regulatory threshold. In other words, these are CoCo-type bonds, implying the state fund is carrying the entire risk of Carige's future capital breaches. Beyond this, there are on-going talks with the Government on the possible SGA SpA (state-owned bad assets fund) purchase of some of the Banca Carige's non-performing assets. As an important aside, the existent bondholders in Carige are not subject to the bail-in rules the EU has put forward as the core measure for reforming banking sector insolvency regime.

These guarantees, buy-ins into Carige's bonds, lack of bondholders bail-in, and potential purchases of the bank's troubled loans constitute a de facto bailout of the bank using sovereign (taxpayers) funds. In other words, the European banking insolvency regime core promise - of shielding taxpayers from the costs of banks bailouts - is simply an empty one.