There is a remarkably linear relationship between median and average new home sales prices in the United States. The following chart reveals that pattern for annual data reported by the U.S. Census Bureau for new home sales from 1963 through 2017 on a logarithmic scale. 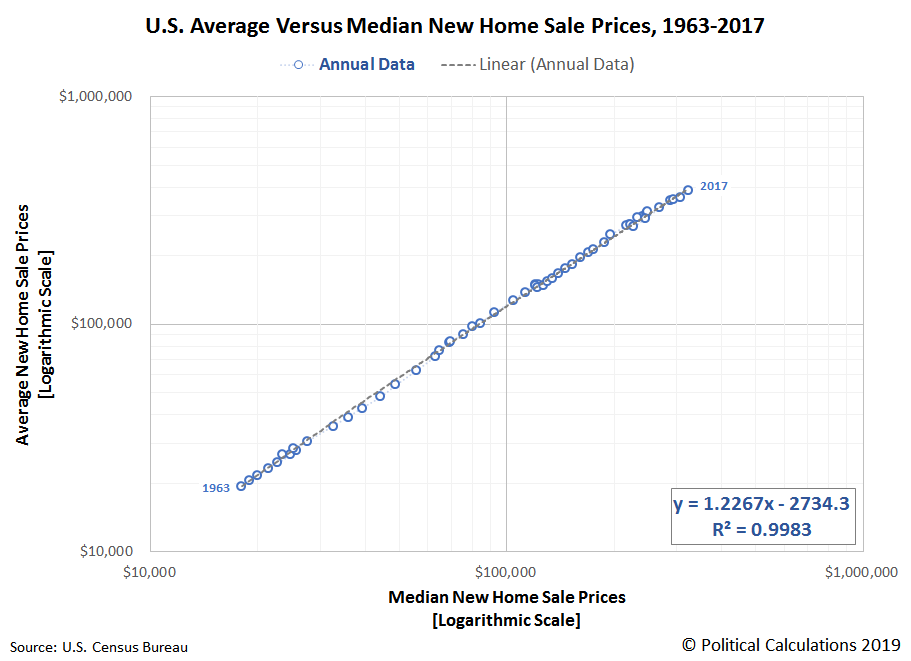 The amazing thing about this relationship is that it has held very consistently even as home prices in the U.S. have experienced both rising and falling trends through these years, where median and average home sale prices have generally increased and decreased in sync with each other. So much so that if we only had the median sale price data for a given period, we could reasonably estimate the average sale price for the same period within 2.7 percent of its recorded value about 68 percent of the time, and within 8.2 percent of its recorded value about 99% of the time.

While the relationship behind this math was developed using new home sales price data, it appears to also hold for existing home sales data with a similar margin of error.

Try it for yourself! Just enter the median new home sales prices for your period of interest in the following tool, and we'll take care of the rest! [If you're reading this article on a site that republishes our RSS news feed, please click here to access a working version of the tool on our site.]

For the default data, for a median home sale price of $220,000, we would expect the average home sale price in the U.S. in the same period of time to fall within several percent of $267,100, the value our tool finds after rounding to the nearest $100 increment.

Altogether, the relationship we've now established between median and average home sale prices in the United States enables a particular line of analysis that we've been seeking to do for some time, which hasn't been possible because the relative lack of availability of data for average home sale prices. Which is a strange thing to say because usually when we're looking for data that many reporting agencies don't realize may involve lognormal distributions, it's a lot easier to find averages than it is to get medians. It's a real credit to the outfits that do recognize this pattern in real estate prices that they properly report median sale price data as being representative of the prices that most home buyers are paying, where we hope they come to recognize that mean sale prices provide additional valuable information about these markets that should also be tracked and reported.