After breaking out above the top end of our redzone forecast range last week, the S&P 500 (Index: SPX) drifted higher through the third week of February 2019, hovering just above it. 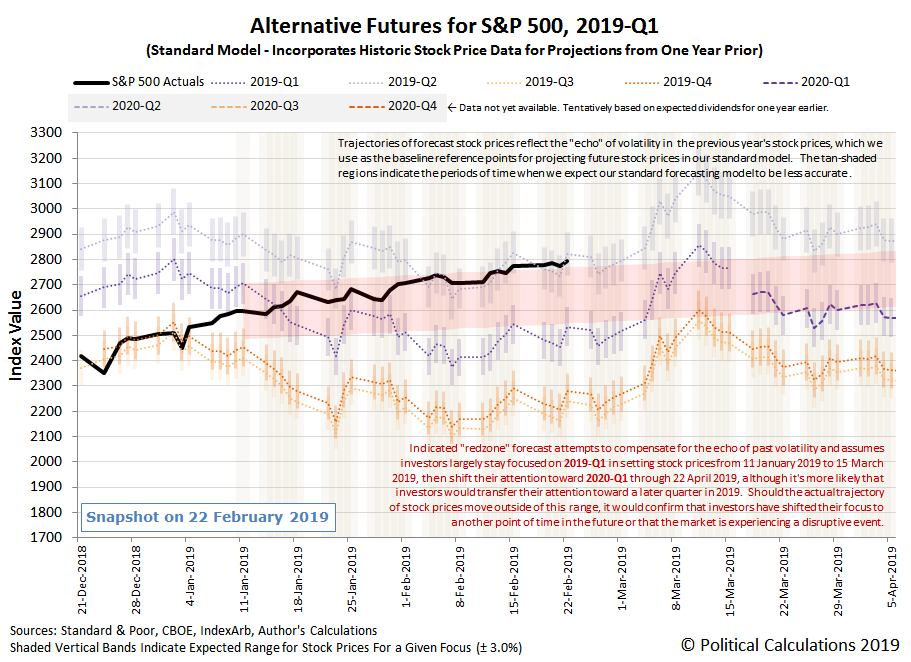 As a reminder, the range indicated by the redzone forecast represents where our dividend futures-based model predicts the S&P 500 would go if they were primarily focusing on the current quarter of 2019-Q1 in setting stock prices, which we've added as an adjustment to account for the model's projections being skewed by the past volatility of stock prices that the model uses as the base reference points for its projections into the future. With the S&P 500 having risen above that range, that's an indication that investors have shifted at least part of their forward-looking focus toward another point of time in the future, which our model suggests is 2019-Q2, although it is still much more heavily weighted toward 2019-Q1 at this time. (Although the unadjusted spaghetti forecast chart looks like they are already fully focused on 2019-Q2, if that were really the case, we estimate the S&P 500 would be nearly 150 points higher after accounting for the effect of past volatility on the model's projections!)

As for why they might be shifting their attention toward this particular point of time in the future, we have to turn to the news of the week for context (see below), where the most promising explanation is a potential deal being struck to either end or mitigate the U.S.-China trade war, which if it were made in March 2019, would have benefits start to be recorded during 2019-Q2's earnings season.

Barry Ritholtz surveyed the week's markets and economy-related news to identify no fewer than five positives and five negatives for the week that was.