Since the start of the Global Financial Crisis (GFC) and through subsequent Euro area crises, the EU frameworks for reforming financial services have invariably been anchored to the need for reducing the extent of systemic risks in European banking. While it is patently clear that Euro area's participation in the GFC has been based on the same meme of 'too big to fail' TBTF banks creating a toxic contagion channel from banks balance sheets to the real economy and the sovereigns, what has been less discussed in the context of the subsequent reforms is the degree of competition within European banking sector. So much so, that the Euro area statistical boffins even stopped reporting banking sector concentration indices for the entire Euro area (although they did continue reporting the same for individual member states).

Chart below plots weighted average Herfindahl Index for the EA12 original Euro area states, with each country nominal GDP being used as a weight. 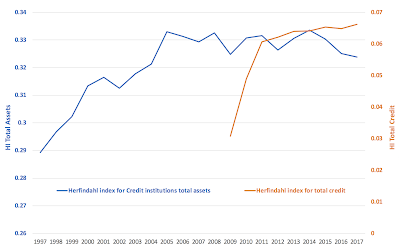 The picture presents a dire state of the Euro area reforms aimed at derisking the bank channel within the Eurozone's capital markets:

Put simply, TBTF banks are getting ever bigger. With them, the risks of contagion from the banking sector to the real economy and the sovereigns remain unabated, no matter how many 'green papers' on reforms the EU issues, and no matter how many systemic risk agencies Brussels creates.