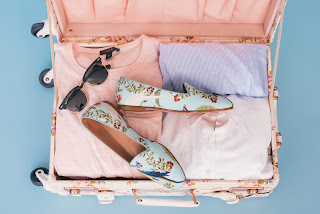 From time to time, Political Calculations takes on the challenge of answering questions that other blogs avoid. Whether that's due to fear on their part, where a sensitive topic may be too far out of their comfort zone, or just because they cannot, we see such challenges as an opportunity.

So let's talk about how much underwear you need to pack while you're traveling away from home. Not long ago, Ashley McIntosh of Brisbane, Australia's 97.3 FM radio posted the solution to a problem that we ourselves never appreciated existed. We'll let her explain....

Are you guilty of packing three times as many pairs of underwear as you could possibly need when travelling.

Or even worse... Not packing enough!?

And it seems pretty thorough. 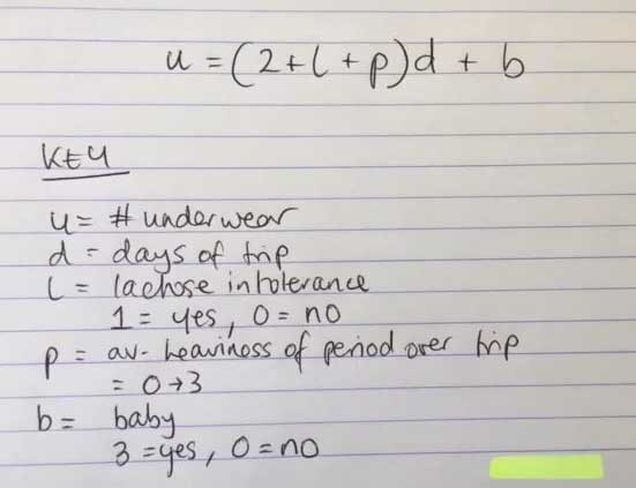 Not just that, but she has also created a public Google doc excel spreadsheet so the math is all done for you!

That's all well and good, but what if you're packing in a rush right before leaving on your trip because you've procrastinated too long and you can no longer afford to take the time to fire up your personal computer to run Karina Judd's spreadsheet to calculate how many pairs of underwear you should pack?

That's the kind of niche market that we seek to serve here at Political Calculations, where we've brought Karina Judd's undie math into the world of online ready reckoners you can run on your mobile! Just enter the indicated data below, and we'll sort out how much underwear you should pack for your travel. [If you're accessing this article on a site that republishes our RSS news feed, please click through to our site to access a working version.]

For the sake of simplicity, we've limited the tool to consider no more than a week-long vacation, where we've assumed you will not have access to clean underwear outside of what you pack (if you're traveling for longer than that, or have limited packing space, you might consider taking advantage of local options for doing laundry during your trip).

We've also generalized the math a bit, to make it more universally applicable. The original math in Karina Judd's spreadsheet was developed by Jess Evans, who considered a number of additional factors that could affect your underwear packing needs, such as the temperature of your destination, whether the drinking water is "dodgy", and whether you will be able to do laundry while traveling, where the spreadsheet can handle a much longer trip.

Underwear math is far from the strangest problem we've built tools to solve! Here's a sampling of some of the other quirky problems we've tackled over time....