Generally, we associate skilled emigration with the phenomenon of 'brain drain' or a zero sum game - the loss of human capital from the country of origin and a corresponding gain to the recipient country. However, as common, the real nature of these effects is more complex than the first order analysis implies.

A new paper by Fackler, Thomas, Giesing, Yvonne and Laurentsyeva, Nadzeya, titled "Knowledge Remittances: Does Emigration Foster Innovation?" (CESifo Working Paper No. 7420) accessible via https://ssrn.com/abstract=3338774, looks at the issue of knowledge flows relating to emigration. The authors find that based on "industry-level patenting and migration data from 32 European countries," "...emigration in fact positively contributes to innovation in source countries. ... While skilled migrants are not inventing in their home country anymore, they contribute to cross-border knowledge and technology diffusion and thus help less advanced countries to catch up to the technology frontier."

More specifically, authors show that "one percent increase in the number of emigrants increases patent applications by 0.64 percent in the following two years. This result is statistically significant at the one percent level and robust to controls, fixed effects, and varying lags. The effect is quantitatively more pronounced when we consider only the flows of migrants with patenting potential." 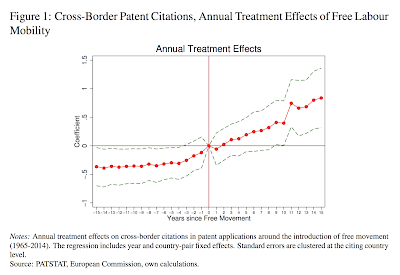 Notice, the above suggests that the positive effect of opening up migration channels on technological convergence is evident as early as two years prior to the EU Accession of 2004. The same is confirmed in the following chart: 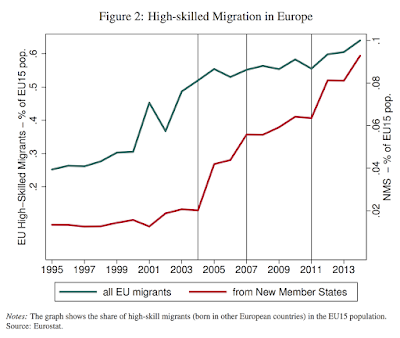 In line with their findings, the authors suggest that

Update: Similar findings are reported in Kim, Jisong and Lee, Nah Youn, High-Skilled Inventor Emigration as a Moderator for Increased Innovativeness and Growth in Sending Countries, East Asian Economic Review Vol. 23, No. 1 (March 2019) 3-26: https://ssrn.com/abstract=3360938. Their paper uses data from 154 countries to show that high-skilled inventor emigration rate has a positive growth effect on the country of origin (COO) by spurring "knowledge diffusion and technology transfer back to their COOs, which in turn affects innovation and growth in their home countries. The result indicates that the direct negative impact of the brain drain can be mitigated by the positive feedback effect generated by the high-skilled inventor emigrants abroad. When coupled with an active trade policy that reinforces growth, countries can partially recoup the direct effect of the human capital loss."