So have the Euro delivered convergence for these states since the end of the Euro area crises, starting with 2014? The answer is firmly 'No'. 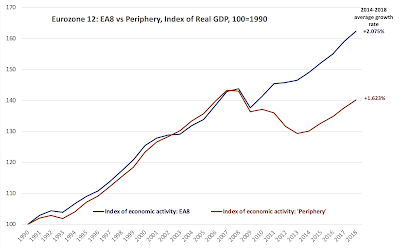 The chart above clearly shows that since the onset of the 'recovery', Euro area 8 states (EA12 ex-periphery) averaged a growth rate of just under 2.075 percent per annum. The 'peripheral' states growth rate averaged just 1.623 percent per annum. In simple terms, recovery in the Euro area between 2014 and 2018 has been associated with continued divergence in the EA4 states. 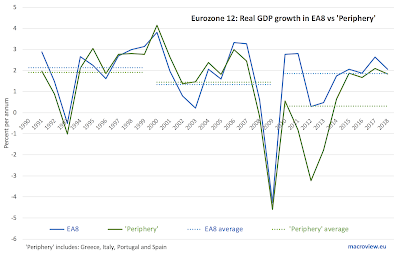 This is hardly surprising, as shown in the chart above. Even during the so-called 'boom' period, peripheral states average growth rates were statistically indistinguishable from those of the EA8. Which implies no meaningful evidence of convergence during the 'good times'. The picture dramatically changed starting with 2009, starting the period of severe divergence between the EA8 and EA4.

In simple terms, the idea that the common currency has been delivering on its core promise of facilitating economic convergence between the rich Euro area states and the less prosperous ones holds no water.