As recently posted by me on Twitter, here are three charts showing the evolution of Russian foreign reserves and external debt: 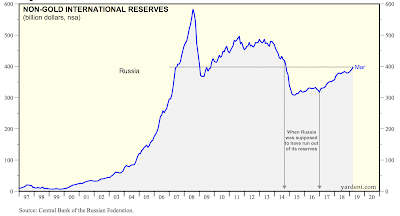 Remember the incessant meme in the Western media about Russia eminently in danger of running out of sovereign wealth funds back at the start of the Western sanctions in late 2014? Well, the chart above puts that to rest. It turns out, Russia did not run out of the reserves, and instead quite prudentially used funds available to carefully support some economic adjustments (especially in agriculture and food sector), while simultaneously balancing out its fiscal deficits.

Do note that the reserves above exclude over USD 91 billion worth of Gold that Russia holds and continues to buy at rising clips.

The result of the prudentially balanced management of the reserves and the economy was deleveraging out of debt (a lot of this was done via restructuring of intracompany loans and affiliated enterprises refinancing), with a reduction in the external debt (chart below), without use of sovereign funds: 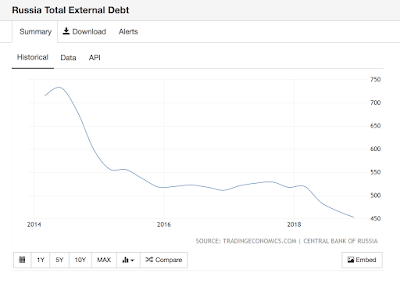 As of current, Russian foreign exchange reserves ex-gold are more than sufficient to cover the entirety of the country public and private sectors external debts.

If the above chart is not dramatic enough, here is a contrasting experience over the same years for the U.S. economy:

Nothing that CNN and the rest of the Western media pack ever managed to capture.