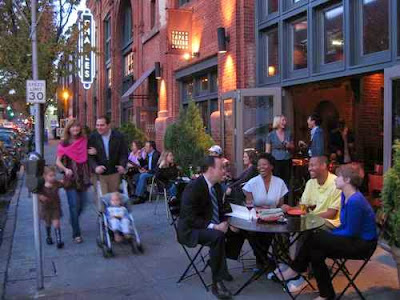 Is GDP growth a good indicator of improving quality of life?

We're not going to debate the topic - we're simply going to recognize that GDP really doesn't communicate how well the quality of life may be changing for a nation's people. That's because it's not really designed to address that question.

So what would be better?

In researching the topic, we dug deep into the history of how Gross Domestic Product became the defining measure of a nation's economic performance. Here, the godfathers of GDP were Alfred Marshall and A.C. Pigou, who originally developed the concept of a "National Dividend" or interchangeably, a "National Income" early in the 20th century. Their work was built upon by Simon Kuznets, who actually developed the prototype accounting calculations for GDP as we know it today.

But almost lost in that early history was a very different concept developed by Irving Fisher, who instead of focusing on production as Marshall, Pigou and Kuznets did, defined his concept of the National Dividend around what people consumed. And while Fisher's concept put the focus on the end consumers in a nations, people living in households, where their consumption of goods and services would provide a measure of their quality of life, it was never fully developed because of the challenges that lay in quantifying it.

This definition is entirely different from that of Marshall or of Pigou. Marshall and Pigou have approached national income from the production end, Fisher approaches it from the consumption end.

His definition is as follows:

"The national dividend or income consists solely of services as received by ultimate consumers, whether from their material or from their human environment. Thus, a Piano or an overcoat made for me this year is not a part of this year's income, but an addition to capital. Only the services rendered to me during this year by these things are income".

Fisher's definition appears to be better and more scientific than that of either Marshall or of Pigou, because he includes in the national income of the country only the money value of the actual consuption of goods and services during the year.

But Fisher's definition has little practical value. The reasons are as follows:

Firstly, since there are so many commodities and so many varieties that is is exceedingly difficult to estimate the money value of total consumption in the hands of millions of consumers in the country.

Secondly, it will be very difficult to allot a definite life to each and every good in order to find out the money value of its consumption in a particular year.

Thirdly, it will be a difficult task of calculating the money value of the consumption of durable consumer goods which will pass thorugh the hands of many persons.

We see that historically, the main obstacle to making practical use of Fisher's consumption-based definition of the national dividend results from the lack of adequate data to describe the consumption of millions of consumers in the country. But that hasn't been true since 1984, when the U.S. Bureau of Labor Statistics and the U.S. Census Bureau teamed up to conduct the Consumer Expenditure Survey. We actually now have three decades worth of solid data to estimate the money value of total consumption in the hands of millions of consumers in the country. That's something that wasn't possible in the early 20th century when these concepts of National Dividends or National Income were being fleshed out.

On reflection, we think that the second and third arguments listed above turn out to be immaterial, in that it is not necessary to allot a definite life to each and every good in order to find out the money value of consumption in a particular year.

Here's why. Taken in the aggregate, all consumer goods and services purchased in a given year are, in effect, fractionally consumed among all consumers, or as the BLS and Census Bureau affectionally refers to them, "consumer units", which are roughly the equivalent of households. 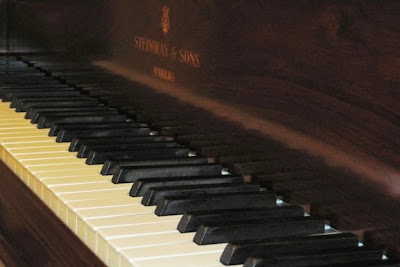 For example, in 2007, the CEX reports there were 121,700,000 consumer units counted in the U.S. economy, who purchased some 62,536 new pianos, to use Irving Fisher's example. The number of purchases in that year automatically incorporates the durability factor of pianos, because those who purchased new pianos in previous years are still in the process of consuming them. Except perhaps for the fraction of those whose pianos have reached the end of their lifespan, who will stop consuming their old pianos.

If you were then to add up the fractional consumption of pianos across all piano consumers in the nation, we should reasonably expect their total number to work out to be well within the ballpark of the number of new pianos purchased annually. And while supply and demand factors will most certainly apply, changes in the number of new pianos consumed annually could also be considered to be varying with respect to the desired consumption rate of pianos across the nation, where their expected effective duration of consumption from year to year is a driving variable.

In practice, we would potentially see that dynamic play out with piano consumers holding off on making new purchases and extending the life of their old pianos during periods of recession, and perhaps more often retiring and replacing their pianos at a much faster pace during periods of economic expansion, where they would increase their consumption of new pianos.

There is also the challenge of how to cope with changes in the value of durable goods like pianos whenever they are exchanged among the population of consumers.

But we think that's also immaterial, because it's really a matter of how the consumers choose to pay for the exchange. As a general rule, piano consumers have two ways in which they can obtain a piano in a transaction. First, they can transform assets they already hold, and which are not counted as part of the National Dividend under Fisher's definition, such as tapping the cash they may have in a savings account, to pay what they believe is an equivalent value for the piano they would rather have. In this case, there is no net change in the measurable quality of life for those participating in this kind of transaction because they have only exchanged assets of equal value between themselves.

Second, since a durable good like a piano can also represent a relatively high dollar purchase for most households, costing anywhere from $3,000 to $100,000, piano consumers could also finance some or all of their acquisition with debt. In this case, we can consider the term of their loans to be reasonably proportionate to the expected life of their new asset, where their debt payments will be spread out over the life of the instrument, reflecting its expected consumption.

That means that we can directly calculate a true national dividend representing by taking the aggregate total of all consumer expenditures among all consumer units/households by subtracting the net change in their total liabilities from one year to the next. The result of that math would be a good indication of degree to which such consumers in the aggregate have sought to attain a particular level of quality of life today at the expense of impairing their quality of life tomorrow, as the bills for their desired consumption come due.

Let's do that math now with the data available from the Consumer Expenditure Survey. Our first chart shows the National Dividend for the average American consumer unit/household in nominal (current year dollar) terms for the thirty year period from 1984 through 2013: 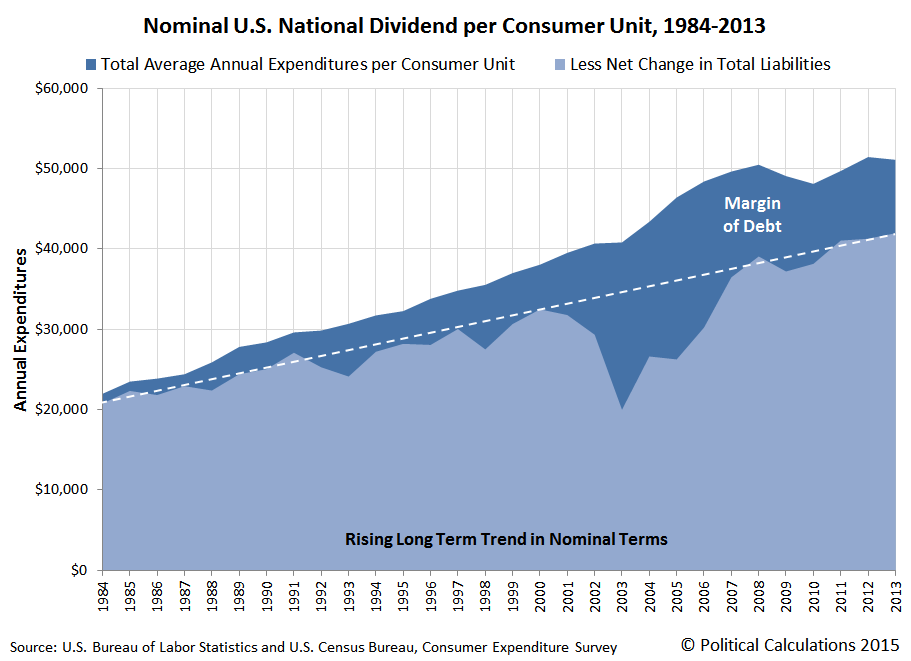 Let's next adjust these numbers to account for the effect of inflation over time, with respect to the Consumer Price Index for All Urban Consumers, in All Cities, for All Items, so that the values are expressed in terms of constant 2013 U.S. dollars. 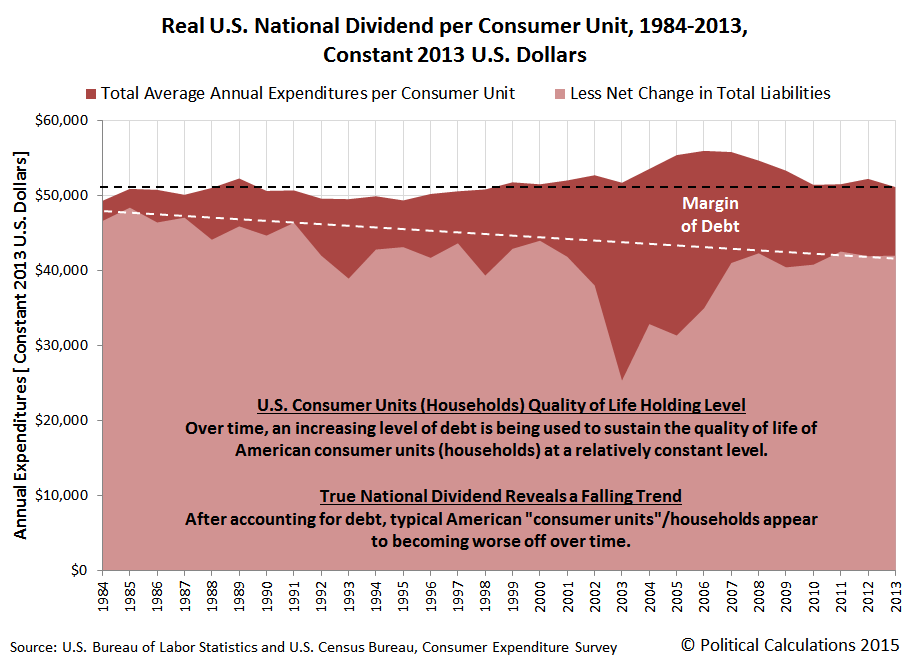 Examining this second chart, we find that over time, an increasing level of debt is being used to sustain the quality of life of American consumer units (households) at a relatively constant level. After accounting for the accumulation of debt via the true national dividend however, we confirm that the typical American consumer unit household would appear to becoming worse off over time.

There are a lot of questions that need to be addressed in this kind of analysis that we haven't yet touched upon. For example, how much could the shifting age demographics of the U.S. population of consumers be contributing to this pattern? Likewise, could generally falling levels of prices for major consumption items like food over time be responsible, which would actually represent an improvement in quality of life as measured by our application of Irving Fisher's national dividend concept?

For a concept that's been around since 1906, we're only just now at the beginning of understanding what the calculation of the national dividend is telling us.