An interesting chart via Cato on the number of Federal state aid programs in the U.S. 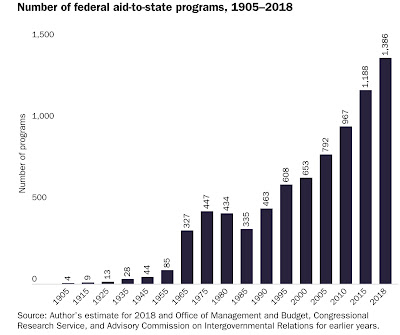 The grand total of these programs in terms of annual spending is roughly US$697 billion. The issue here is that these programs are continuing to increase in scale and scope despite the so-called 'strongest economy, ever' (excluding the recent changes under the Trump Administration that propose significant cuts to some of these programs on the social welfare, public health and education sides for Budget 2020) .

Here is the summary of the main program headlines and outlays: 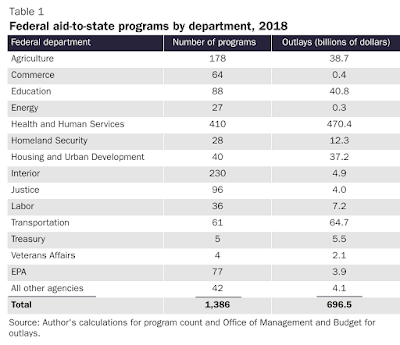 Source for both charts: https://object.cato.org/sites/cato.org/files/pubs/pdf/pa868.pdf

Nonetheless, whether or not the state supports and welfare entitlement programs can be afforded into the future (yes, demographics of ageing are driving up the demand for many of these programs, while also making them more politically feasible with older voters, yet reducing the capacity of the economy to carry these increases), the major issue that is left un-addressed by the American analysts is the overall composition of the U.S. Federal spending.

As discussed in this article: https://bit.ly/2VU39Hj, current 2020 budgetary outlook envisions a massive increases in military spending, offset by the reductions in assistance to the low income families, education and public health. Here is the summary slide on this from my new course slides on the subject of the Twin Secular Stagnations: 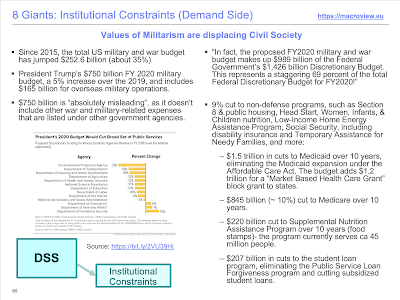 The key quote from the above: "In fact, the proposed FY2020 military and war budget makes up $989 billion of the Federal Government’s $1,426 billion Discretionary Budget. This represents a staggering 69 percent of the total Federal Discretionary Budget for FY2020!"

No matter how concerned we might be with the sustainability of the Federal fiscal policies, transfers to the States from Washington are, de facto, a form of local monetization of the Fed monetary policies, some of which is being cycled into state-level investments in public infrastructure and education, as well as public health. Pentagon's spending, in contrast, carries virtually no investment-like benefit for the rest of the society, and much of the 'securing our nation' argument in favor of spending almost a trillion dollars on weaponry and military personnel is bogus as well (unless you still, for some unfathomable reason, believe that demolishing Libya or Syria are of some benefit to the actual American society or that the likes of Iraq and Iran pose a truly existential threat to America).