If you block out the noise coming out of Washington D.C., as most investors do, the fourth and final full week of September 2019 saw a lot of good news for the U.S. economy. Even the ever uber-pessimistic Tyler Durden grudgingly acknowledged as much before setting the stage for future doom:

The last few weeks have seen a dramatic surge in US macro data surprises (to the upside), dramatically diverging from the rest of the world (and almost single-handedly improving the global data)...

ZeroHedge chalks much of that effect to the U.S. government's "Use It Or Lose It" end-of-fiscal-year spending, which they argue is having a short term stimulative effect on the U.S. economy. Which will soon come to an end (this is ZeroHedge, after all)!

But the Tylers are good observers of the market and we can confirm the cumulative effect of the upside economic data surprises with the CME Group's FedWatch Tool, which not only no longer indicates any rate cuts after 2019, but also indicates the falling probability of a rate cut in the fourth quarter of 2019 (2019-Q4): 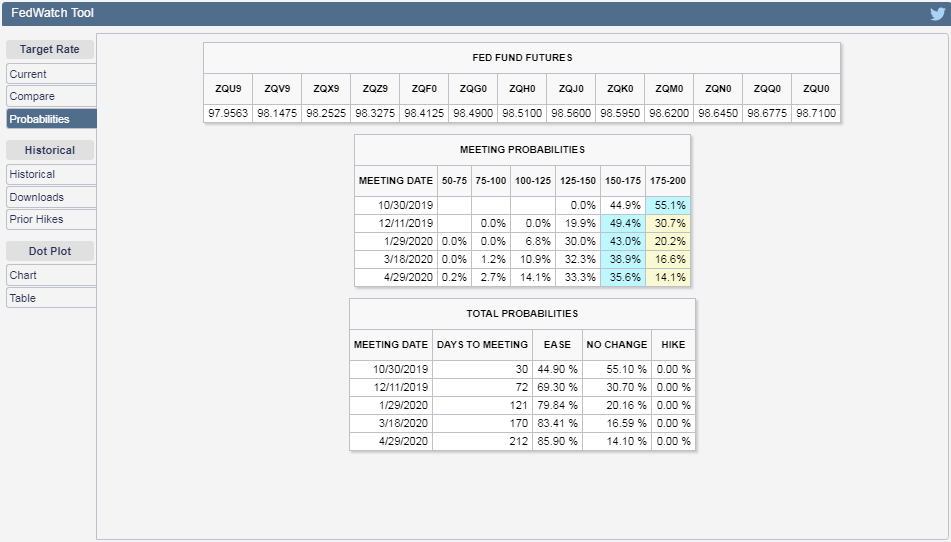 That's good news, but in the chaotic math of how stock prices work, that means investors are shifting their forward-looking attention inward from the distant future horizon of 2020-Q1 toward 2019-Q4, which means that stock prices would fall given the expectations associated with that quarter. 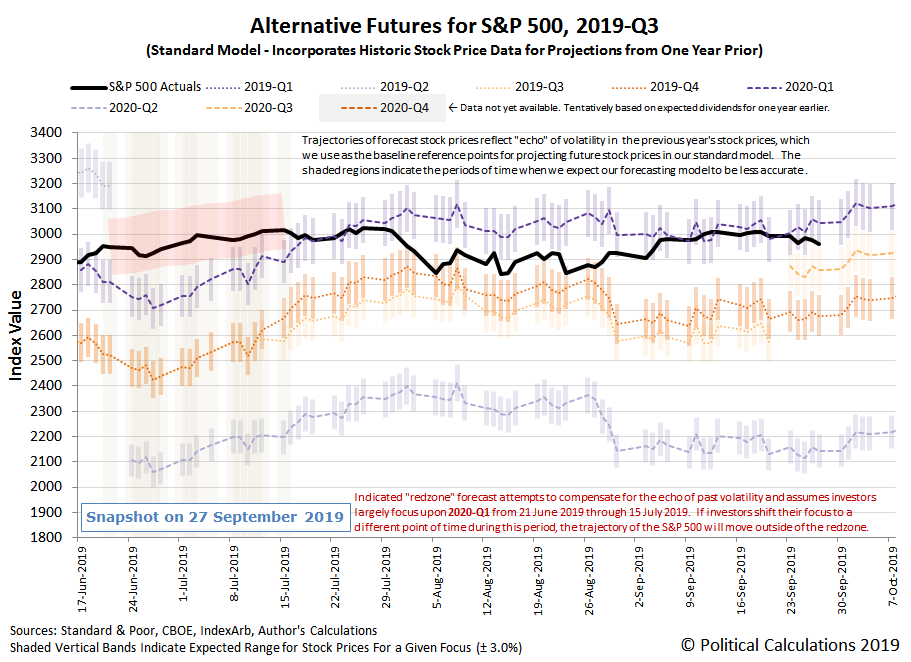 That may be the start of the sixth Lévy flight event of 2019, although at this point, we may see investors opt to split their focus between 2019-Q4 and 2020-Q1, where we might not see another full quantum-like shift from the trajectory for 2020-Q1 to the alternate trajectory for 2019-Q4 like we did earlier this quarter.

If we do, it will be associated with a much larger drop in stock prices than occurred in early August 2019, because the expectations for the change in the year-over-year rate of growth of future dividends for the S&P 500 has changed, with a larger gap opening up between the alternate trajectories associated with investors focusing on either 2019-Q4 or 2020-Q1.

If the flow of upside surprises slows and negative surprises start to take hold however, we could see stock prices rise with the increased probability of a rate cut in 2020-Q1. Or the picture for the economy may continue to improve, which would seemingly paradoxically send stock prices lower as the potential for one last rate cut before the end of 2019 becomes a point of focus.

Or investors could have reason to shift their attention to another point of time altogether, with the trajectory of the S&P 500 shifting accordingly. No matter what, the current market environment is ripe for stock prices to experience a lot of potential volatility. If you know which way it's going to go, more power to you!

Speaking of the current market environment, here's a sampling of market-moving news headlines from the fourth week of September 2019:

Barry Ritholtz outlines no fewer than eight positives and negatives each that he found in the past week's economics and market-related news.