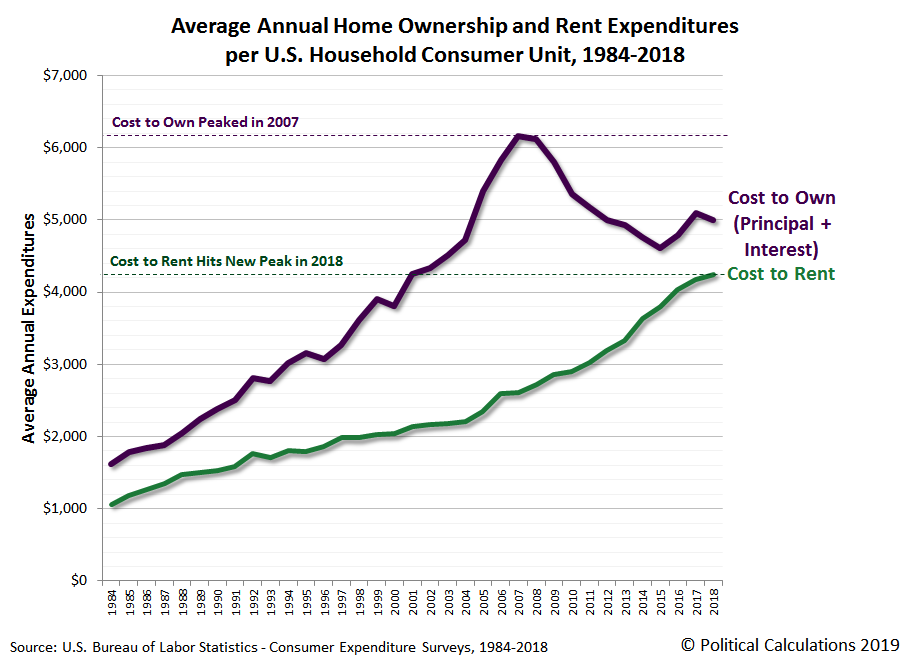 Remarkably, the rent rose even as the cost to own, as measured by the average annual combined cost of mortgage principal and interest payments, fell. From 2017 to 2018, the average household consumer unit expenditure for rent increased from $4,167 to $4,269, while the cost to own declined from $5,104 to $5,002.

Before going any further, we should recognize the data reported by the Consumer Expenditure Survey is spreading all these payments out over all household consumer units in the United States. In 2018, there were an estimated 131,439,000 household consumer units, where 48,632,430 (37%) paying rent, an equal number of homeowners making mortgage payments, and 34,174,140 homeowners (26%) with no mortgage payments.

The average monthly rent paid in the United States in 2018 is 83% of the cost of a simple mortgage payment that omits any homeowners' insurance payments or property taxes that might be included with it.

In case you're wondering what ever happened to Jimmy McMillan, the founder of the Rent Is Too Damn High political party in New York who ran for state governor in 2006 and 2010, he has retired from politics, but since the rent keeps rising, we can only wonder if he is considering making a comeback!