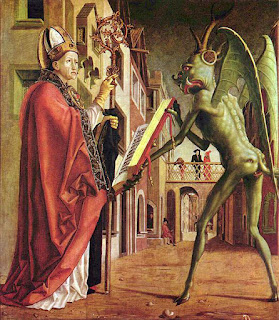 Prime numbers can be very strange. One is believed by some to be an embodiment of evil.

That number is known as Belphegor's prime. Named after the demon Belphegor, one of the seven princes of Hell, this prime number is a numeric palindrome, which means it will read the same if you write its 31 digits either forwards or backwards.

If you don't look at it too closely, you might dismiss it as a harmless binary number, if not for the Number of the Beast, 666, which itself is the sum of the squares of the first seven prime numbers, lurking within the middle of it.

As it is, you would write Belphegor's prime by starting with the number 1, followed by 13 zeroes, then the aforementioned Number of the Beast, then another 13 zeroes before ending again with the number 1. If you wanted to convert it into binary format, it is a much less interesting 100 digits worth of 1s and 0s. The true terror of it must be experienced in decimal form.

And yes, it is indeed a prime number that may not be divided evenly by any other whole number other than itself or 1. Check it out for yourself, if you dare!

But if not, at least you now know how to terrify a mathematician on the next Halloween by unleashing the ugly specter of numerology.