The Federal Reserve's Open Market Committee (FOMC) wrapped up its latest two-day meeting on 29 January 2020, signaling they would hold the Federal Funds Rate within its current target range of 1-1/2 to 1-3/4 percent.

That lack of change combines with a U.S. Treasury yield curve whose rolling one-quarter average has steepened on average during the last six weeks since the FOMC's December 2019 meeting, even though the bond market's reaction to the potential economic impact of China's coronavirus crisis has significantly flattened the yield curve since it hit in the last week. All that together means the probability that a new economic recession will someday be determined to have started in the United States between January 2020 and January 2021 has fallen to 1 in 28, or roughly, a 3-4% probability, where the chart below is rounding down from a more precise estimate of roughly 3.5% in its latest update. 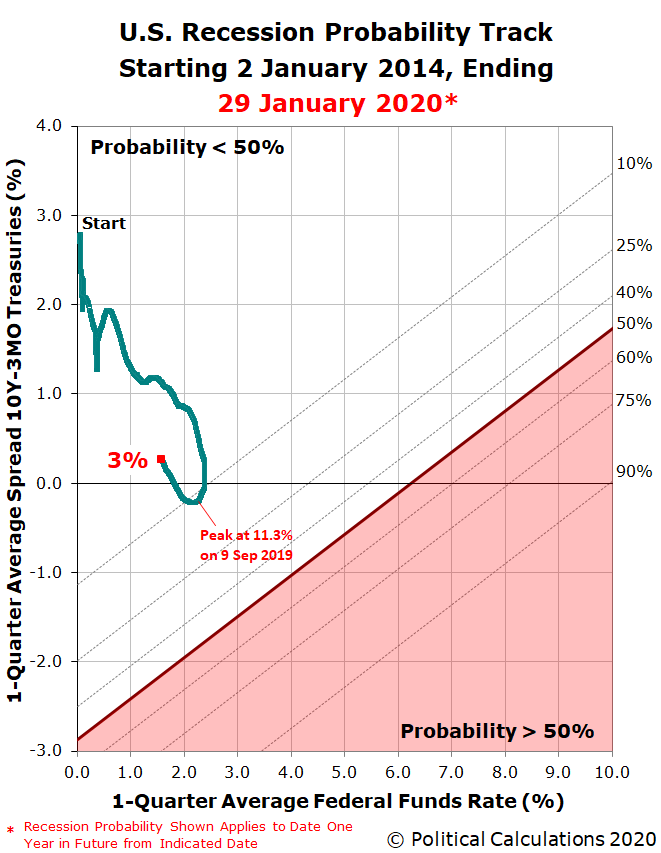 Back on 9 September 2019, those odds had previously peaked at 1 in 9, where if the NBER eventually NBER ever does determine that the national U.S. economy entered into recession in either 2019 or 2020, they will most likely identify a month between September 2019 and September 2020 as its starting point.

These probabilities come from a recession forecasting method developed back in 2006 by Jonathan Wright, which uses the level of the effective Federal Funds Rate and the spread between the yields of the 10-Year and 3-Month Constant Maturity U.S. Treasuries to estimate the probability of recession based on historical data.

While we're now providing this analysis after each of the Federal Open Market Committee' regularly scheduled meetings every six weeks, you don't have to wait for us if you want to get an update on the latest recession odds sooner! Our recession odds reckoning tool is both free and really easy to use. Plug in the most recent data available, or the data that would apply for a future scenario that you would like to consider, and compare the result you get in our tool with what we've shown in the most recent chart we've presented above to get a sense of how the recession odds are changing.

Depending upon how the yield curve behaves over the next several weeks, we may resume presenting updates in this series more frequently. We'll see how that goes.

We've been tracking the ebb and flow of heightened recession odds since June 2017 - here are all the posts in our latest recession forecasting series!