After dropping to close at its lowest point of 2020 the week before on fears of the disruptive economic impact of China's coronavirus outbreak, the S&P 500 (Index: SPX) performed a U-turn in the first week of February 2020, setting two new all-time record highs for the index during the week before dipping slightly on Friday to close the week 102.19 points (3.2%) higher than it had in the previous week.

If you're a regular reader of our S&P 500 chaos series, you already know the reason why. If you've just joined us, here's the key bit of analysis from the article we posted early on Monday, 3 February 2020, well before the markets opened:

At this point, it is a little too early to identify the downward fall in stock prices as a new Lévy flight event, which would be the second such event in 2020, though last week's action on Friday, 31 January 2020 suggests it may be the start of a new one. If it is, where we would see investors fully shift their focus toward 2020-Q2 in setting stock prices, the S&P 500 would have the potential to fall somewhere on the order of 300 points if nothing prompts them to refocus part or all of their attention on 2020-Q4.

We'll find out soon enough, where China's stock market will be reopening this week, although with restrictions against short selling and also with China's government likely to inject new liquidity into the nation's stock markets to boost them, which may affect other stock markets around the world depending on how much liquidity they add.

That last paragraph is something of an understatement, because China's central bank injected an absolutely massive amount of liquidity into its markets in the last week.

Typically, China's central bank (PBOC) floods the system with liquidity ahead of the lunar new year holiday to ensure banks can fund themselves for the week off and window-dress/support asset-values to ensure optimism and consumption continue. Also, typically, that repo-provided liquidity is rolled off shortly after the holiday is over...

However, this year, as the lunar new year liquidity provision began, the ominous signs of a deadly virus were building and PBOC decided that instead of unwinding the large liquidity provision, they would double-down on it... and that they did in size.

The last four weeks have seen China supply over CNY2 trillion (net!) into its financial system - something we have never seen anything like before... 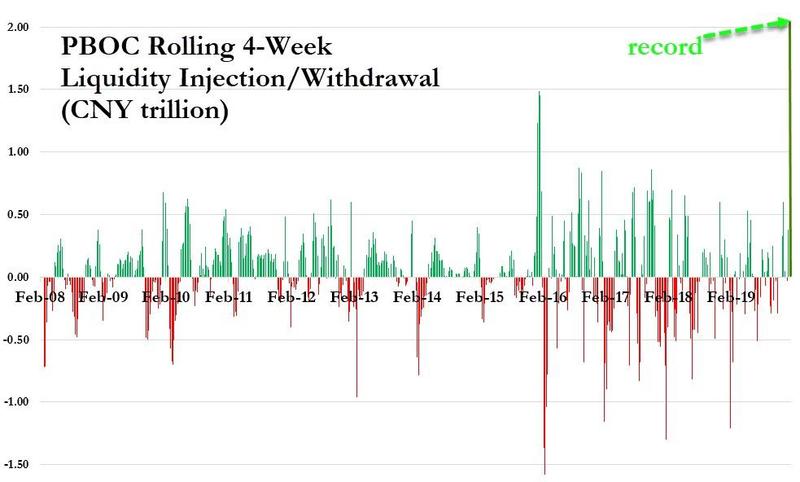 And that unprecedented wave of $300 billion liquidity injection lifted every boat in every storm...

But it wasn't just China injecting liquidity into its markets. The Federal Reserve also cranked up its liquidity support operations in U.S. money markets during the last week.

Together, the central bank actions have reduced volatility, boosting stock prices. Here's what that looked like for the S&P 500 on our spaghetti forecast chart: 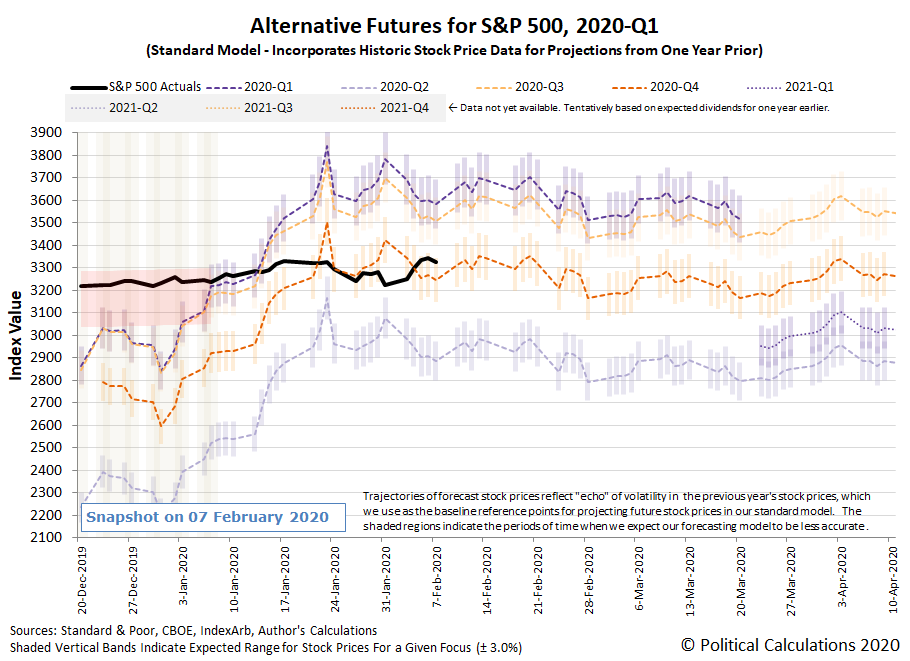 Last week, we confirmed that the decline in stock prices on Friday, 31 January 2020 occurred as investors were shifting their forward-looking attention toward 2020-Q2 as the likely timing of the Fed's next interest rate adjustment, as the dividend futures-based model we use in our analysis anticipates would happen in that case. This past week however, stock prices rose, which suggests that investors shifted their focus away from 2020-Q2, toward a more distant future quarter. The latest snapshot of the Fed rate change probabilities recorded by the CME Group's FedWatch tool suggests that might be 2020-Q3: 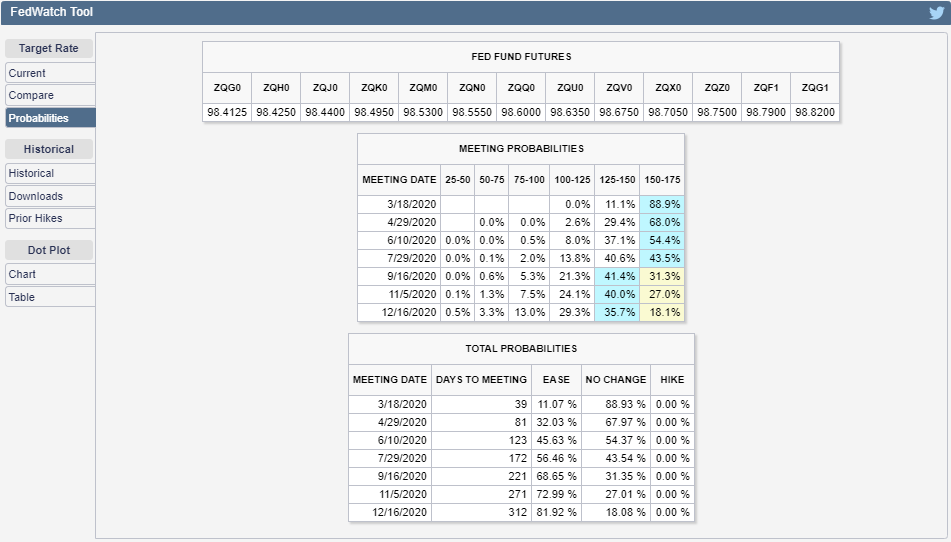 This is where we have to add a note of caution, because we're dealing with a rapidly evolving situation in the markets. If you look at the alternative futures chart above, if investors shift their attention fully toward 2020-Q3 in setting current day stock prices, the S&P 500 could continue to rise by as much as 250-300 points. But, if China's and the Fed's liquidity injections work to stabilize markets as intended, the FedWatch tool's probability estimates may only have caught investors in the process of shifting their focus more fully back toward 2020-Q4, which is consistent with the S&P 500's recent trajectory, which would also mean that stock prices are within a few percent of where they might go.

We'll find out which scenario applies, or if something happens to refocus investors on 2020-Q2 to send stock prices lower, during this next week. Until then, here are the market-moving headlines we found in the flow of the past week's news streams.