I have been posting quite a bit on U.S. unemployment and jobs destruction numbers coming from the COVID-19 pandemic. So here are two charts to watch into the future, and I will be updating these throughout the crisis here. 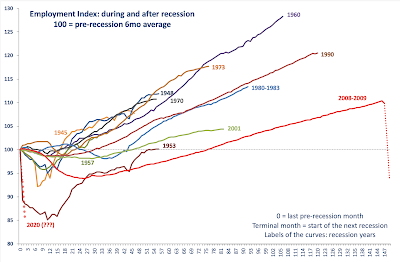 The second chart is the average duration of unemployment claims or average weeks unemployed. Again, series start from the first month of officially-declared recession and run until the subsequent recession. 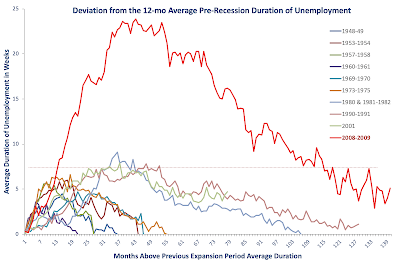 Both charts illustrate the contradictory nature of the post-2008-2009 recession recovery. Whilst the recovery has been the longest in duration (chart 1 above), it has not been the most dramatic in terms of employment creation relative to prior pre-recession peak (line "2008-2009" solid segment runs longer than any other line, but does not gain heights of at least 6 prior recoveries.  Per chart 2 above, recovery from 2008-2009 recession has been associated with unprecedented length of duration of unemployment. The series here stop at the end of February 2020, so they do not account for the recent jobs losses, simply because there has not been, yet, official announcement of a recession.

Stay tuned, as I will be updating these two charts as data arrives.