After see-sawing during much of the trading week, the S&P 500 (Index: SPX) rose to close the volatile week at 2,874.56. That is 511.59 points lower than the record high closing value the S&P 500 hit back on 19 February 2020, just before the spreading coronavirus pandemic sent stock prices crashing, and that is 637.16 points higher than the bottom of 2,237.40 the index recorded on 23 March 2020, which marks the beginning of when the Federal Reserve finally began ramping up major interventions to provide liquidity to cash-starved businesses.

Through the close of trading on ending Friday, 17 April 2020, it appears those interventions have flipped the normal order for stock prices upside down, causing the amplification factor that relates changes in the growth rate of dividends to changes in stock prices to become negative. The alternative futures forecast chart shows the effect of that regime change, which appears to have taken place in stages. 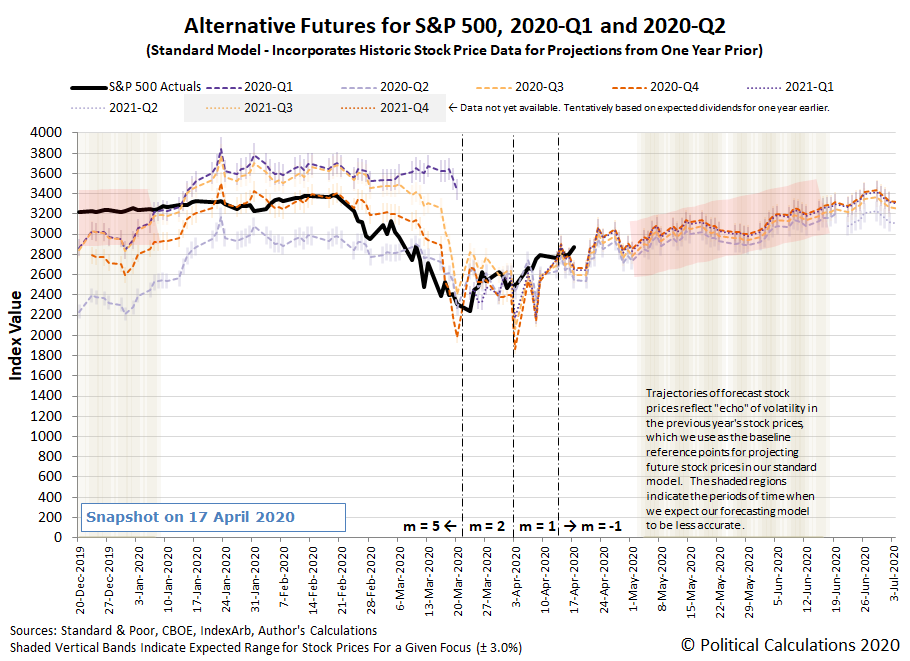 Right now, the chart reflects a general outline of how the amplification factor m has been changing over the last few weeks, after having been virtually a fixed constant over the past decade. Additional work needs to be done to refine the timeline of the Fed's actions to quantify the impact they have had and are having on the value of stock prices.

We cannot understate that apparent impact. In a comparatively stable stock market environment, stock prices rise when changes in the expected future growth rate of their underlying dividends per share are positive and they fall when those changes in the expected future growth rate of dividends turn negative, which makes intuitive sense. In the upside down market the Fed has created during the last three weeks, stock prices are rising even though the expected change in the growth rate of dividends per share over the foreseeable future are negative. Nobody as yet has any idea of how stable that new regime might be, nor how long the Fed might be able to sustain it, nor how the Fed might ever be able to stop doing what it has started without creating a massive disruption in the markets.

Welcome to the upside down! Here are the past week's more significant news headlines from the stock market's new regime:

Stranger things indeed. Want to see the week's markets and economy-related news divided into positive and negative bullet points? Check out Barry Ritholtz' succinct summary of the week's events to get a bigger picture than what we've presented!

As the market's volatility keeps it interesting, we'll continue providing daily updates throughout the week by appending them to this article, so if you're reading it on a site that republishes our RSS news feed, please follow this link to catch up with any updates to it.

The Day They Paid People To Take Oil

Update 20 April 2020, 9:30 PM Eastern: We picked the right headline for this edition of our S&P 500 chaos series, as the U.S. economy has indeed entered the proverbial Upside Down. The evidence for that was the crash of West Texas Intermediate crude oil prices, which turned negative to close at -$37.63 per barrel for the first time in history today, where low demand and the absence of storage space in Cushing, Oklahoma led oil suppliers to offer to pay people to take their oil because they don't have anyplace else to keep it.

This isn't just a U.S. story. With an oil glut developing all over the world, a race is on to find places to store crude oil, with oil tankers in exceptionally high demand as producers have turned to storing their oil on the high seas.

The dim prospects for oil demand being restored anytime soon sent the S&P 500's dividend futures for 2020-Q2 notably lower. Meanwhile, the S&P 500 itself closed lower, dropping only 1.79% to close at 2,823.16. If not for being in the Upside Down, it's likely stock prices would have fallen much, much further. 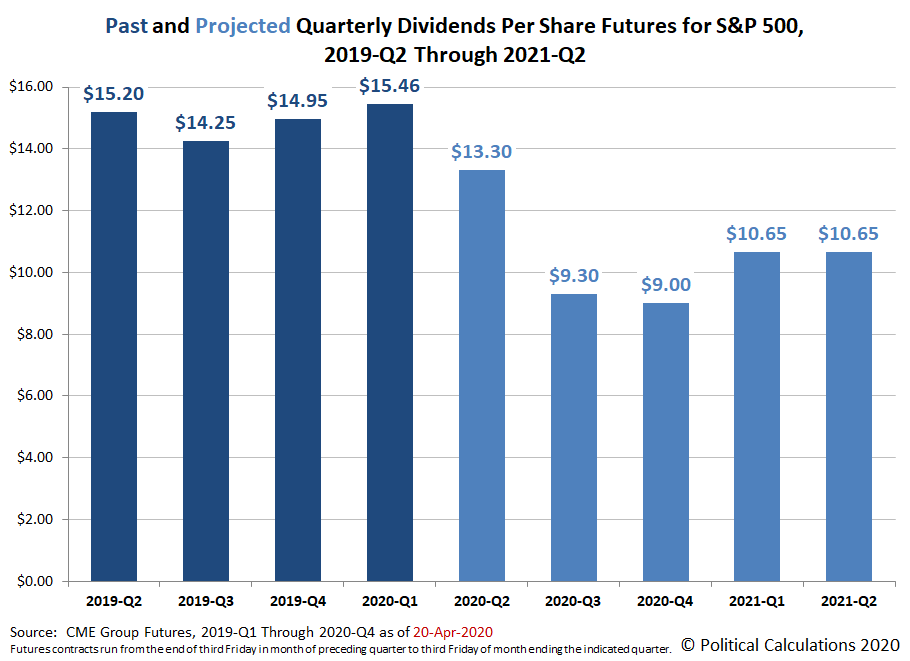 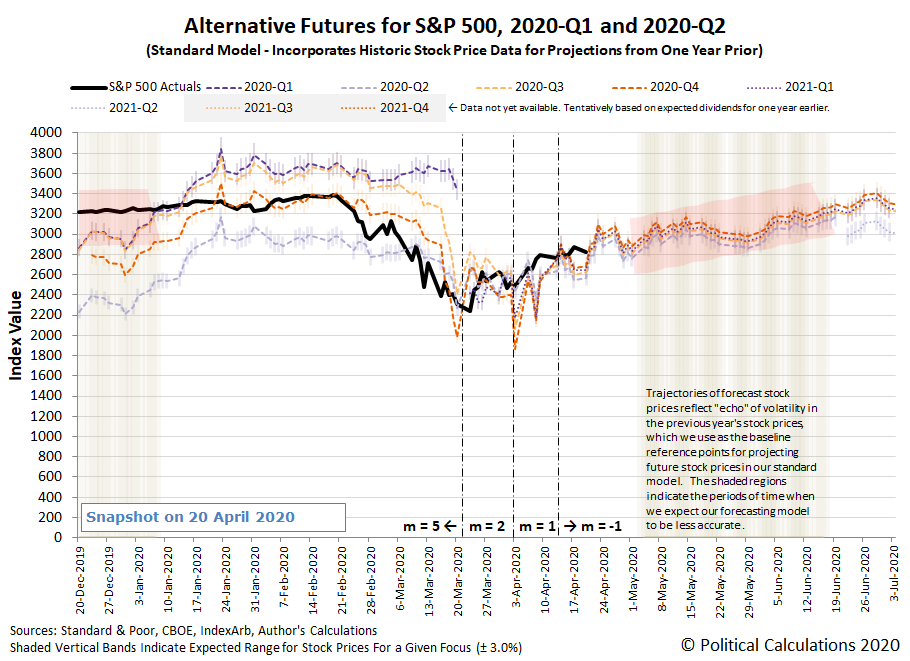 Update 21 April 2020, 6:30 PM Eastern: The collapse of global oil prices dominated the market today, with the oil and gas sector particularly hard hit. We're tracking dividend cut announcements behind the scenes and can confirm activity from that sector has significantly ramped up in the past week. 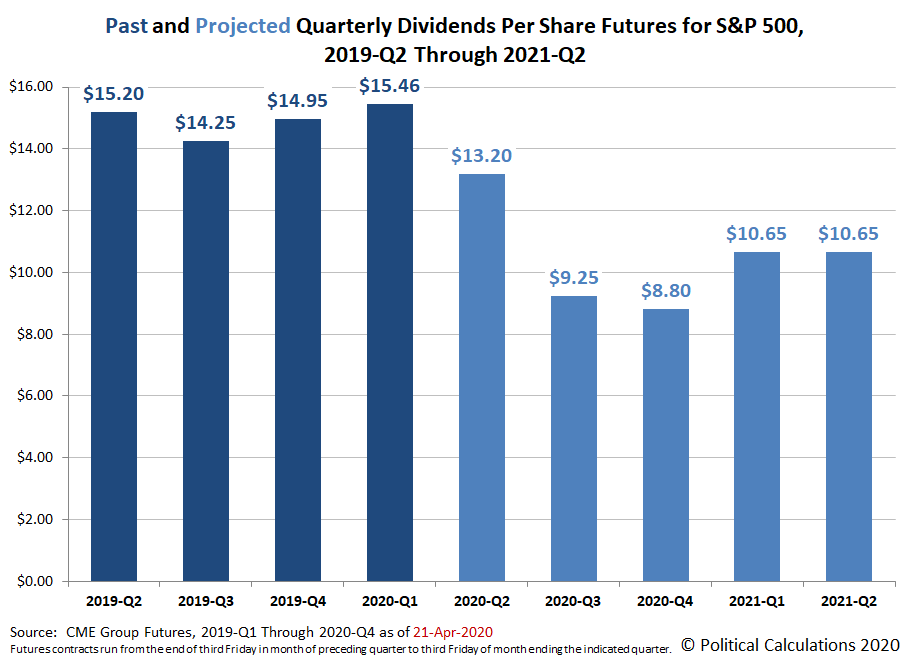 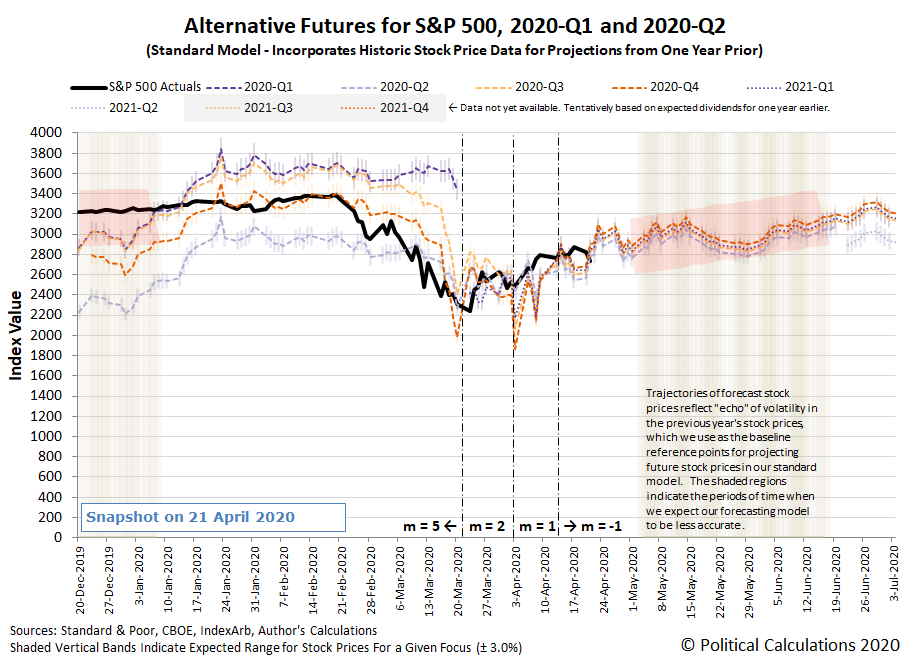 We're also seeing heightened traffic to our Factoring Global Demand Into the Price of Oil tool on the producer side, and also our Where Are U.S. Gas Prices Going? tool on the consumer side. Speaking of which, the latter tool suggests gasoline (petrol) prices at the pump could average $1.48 nationally in the near future.

We're also wondering how long the amplification factor can remain at -1, but we may soon find out.

Update 22 April 2020, 6:30 PM Eastern: Oil was up, with hopes the glut in Cushing's storage facilities can be dealt with to make negative oil prices into a temporary phenomenon.

That led to modest boosts in expected dividend futures and in the S&P 500 (Index: SPX), which increased 2.3% to close at 2,799.31, with oil and gas firms gaining on the development. 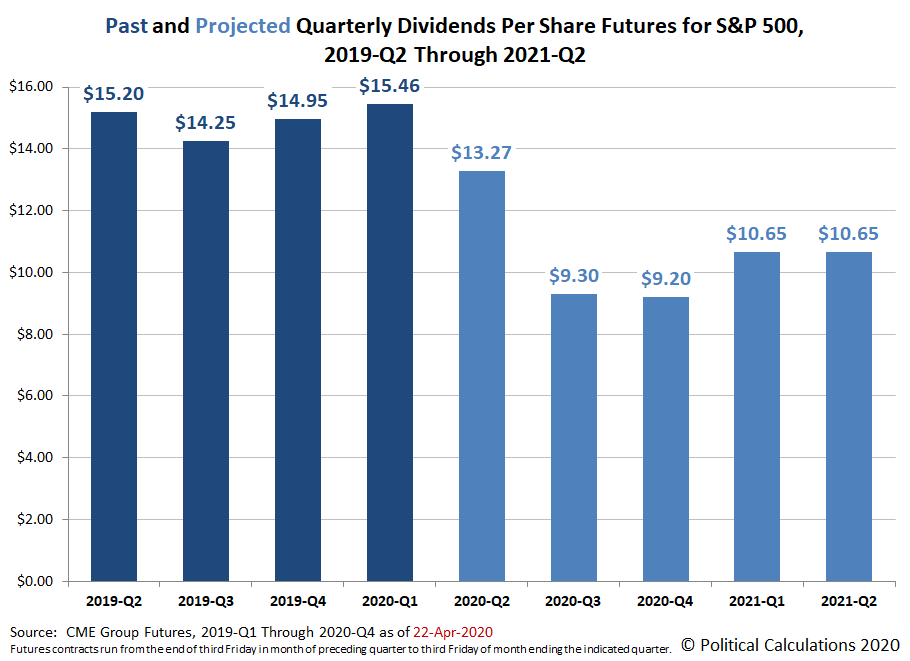 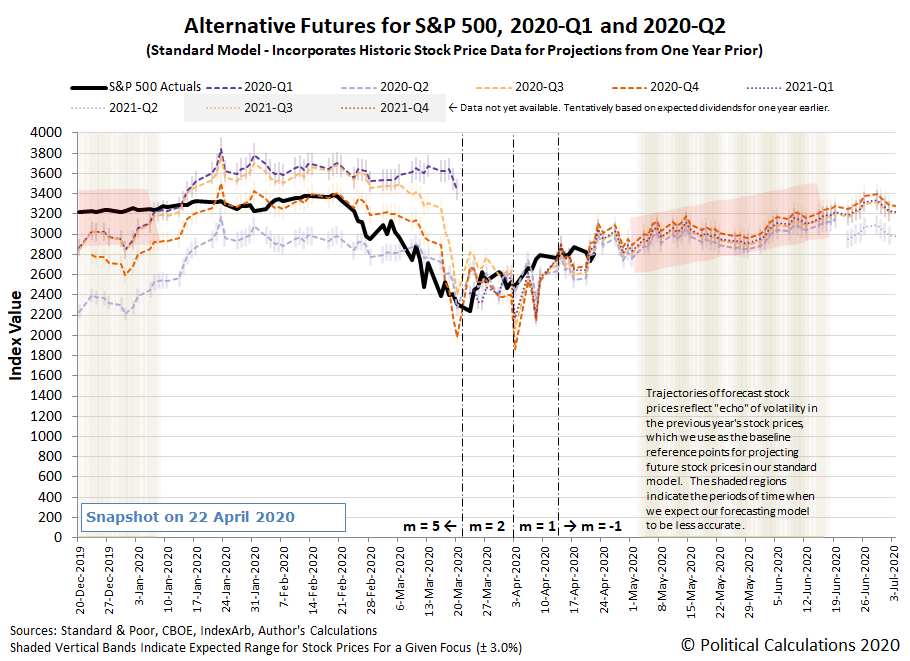 What shoe do you suppose will be the next to drop in the Upside Down stock market?

Update 23 April 2020, 6:30 PM Eastern: What happens to stock prices when the promise of a drug for treating COVID-19 proves to not be what had previously been believed?

The short answer to that question is it deflates what had been set to be a positive day for the U.S. stock market. The good news is that oil prices rose on the day, providing some stability for that distressed sector, which offset the drop in pharmaceuticals. At the end of the day, dividend futures were slightly up, thanks largely to the improvement in the outlook for the oil sector, but the overall S&P 500 (Index: SPX) very slightly dipped 0.05% to close at 2,797.80, deflated by news of the reported failure of Gilead's Remsdevir drug in testing. 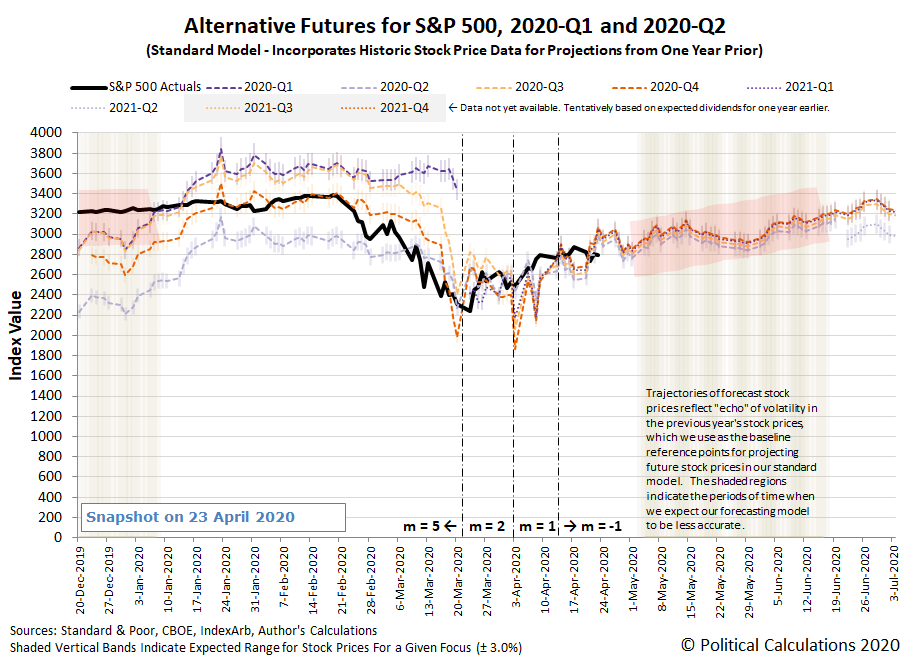 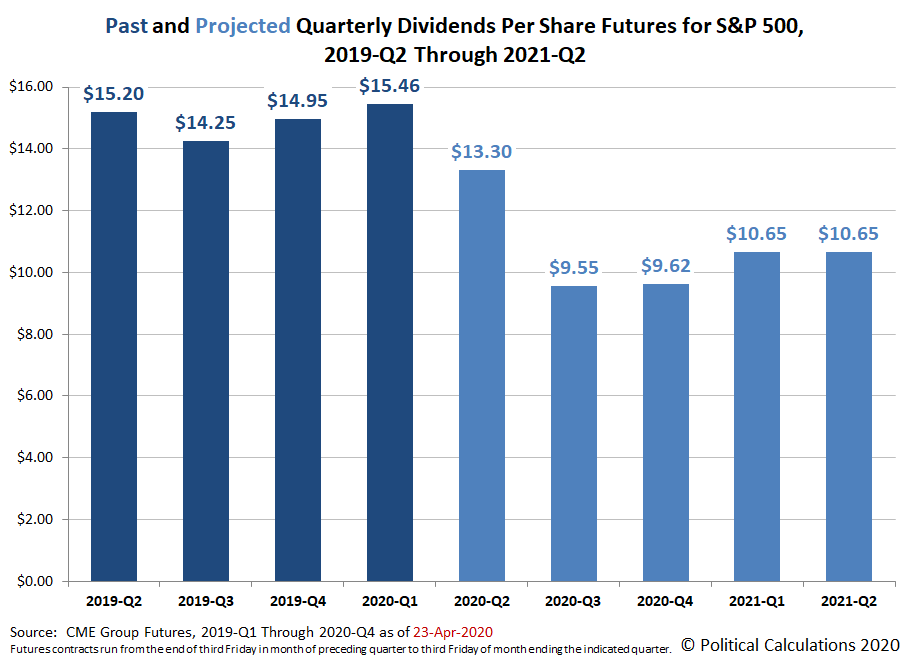 That it for daily updates this week. We'll pick things up with what happened on Friday, 24 April 2020 in the next edition of the S&P 500 chaos series.