In a virus-filled world, opening doors presents a problem.

If you weren't concerned about the risk of infection, you could just reach out and grab a door knob, turn it, or if it has a handle, perhaps push or pull it, and through the door you go. But if you are afraid of coming into contact with a virus, where you have no idea how many people have touched the door handle and left infectious germs behind, does every door handle suddenly look like designer Naomi Thellier de Poncheville's whimsical Door Hand-Le concept? 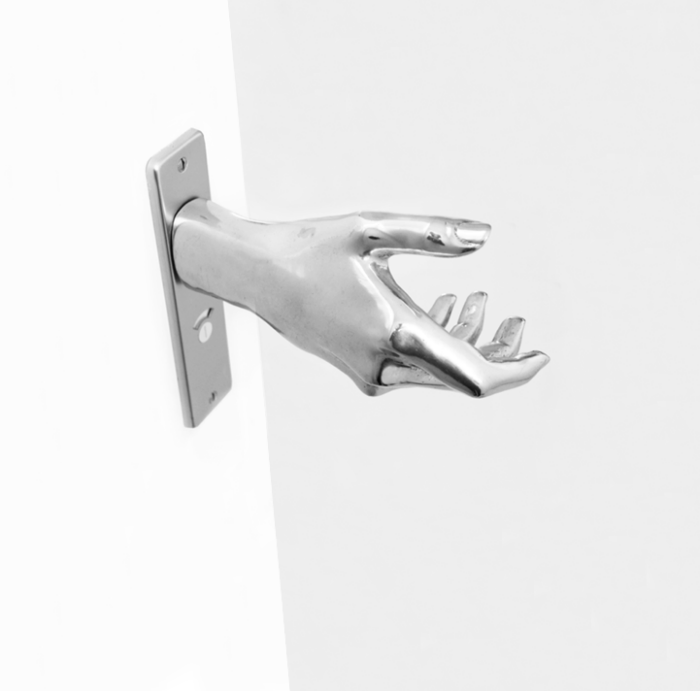 Does that look inviting or scary to you?

If it looks scary, there's a new Kickstarter project that solves the problem the same way a pirate would. Or at least one public domain pirate named Captain Hook: replace your hand with a hook! The following video introduces StatGear's Hygiene Hand, which they've clearly tailored as a solution for several very modern problems involving handling things that other, potentially contagious, people have touched so you don't have to!

The project easily cleared Kickstarter's pledge bar of $5,000, collecting around a half-million from over 9,000 backers, so the Hygiene Hand is something you may soon see. Especially in coronavirus-ravaged New York City.

But what about regular door knobs? A hook may work with a handle, but a typical cylindrical door knob doesn't offer much surface for a hook to grab onto.

That's where Rafael Vargas, Cristina Centeno, and Chad M. Wall's dorrhandle attachment might come in handy. It's a 3D printed easy-to-assemble latch that can slip over most door knobs, transforming them into handles that you don't need to touch with your hands to operate. If you have access to a 3D printer, they've made the model of their design available. Here's an animated image of it in action, which also highlights a feature of the material they used in their design:

The plastic they used in their design is thermochromic, which changes color when heat is applied to it. As it does in the animation after it has been in contact with someone's fingers for a short time, letting you know the handle was recently handled.

These solutions might work in public, but what about at home? If you would like to not have to accessorize just to access your own home, you might consider swapping out your current door handles with products that are made with antimicrobial copper, such as Olin Brass' CuVerro alloy, or that are covered with a silicone treated with antibacterial silver.

In a virus-filled world, opening doors shouldn't be a physical challenge. What will the world's inventors come up with next?

HT: Core77, where you can see what's in the future of everyday objects!