There is good news across much of the U.S. as many states are seeing a deceleration in the rate at which the SARS-CoV-2 coronavirus is spreading among their populations. That positive trend combined with increased testing in recent weeks is allowing many of the better managed states to lift the more draconian restrictions they placed on residents and businesses in response to rapidly growing numbers of COVID-19 infections in the early weeks of the epidemic, though some states and territories are lagging behind.

The following tower chart shows the overall state of the coronavirus epidemic in the United States through the end of the eighth week for which the COVID Tracking Project has been regularly tracking the progression of the virus' spread at the state level. Over 7.5 million Americans have been tested for the coronavirus, with over 6.3 million testing negative and nearly 1.2 million testing positive. 65,307 deaths have been attributed to COVID-19, roughly 30% of which have occurred in the state of New York, where a quarter of those deaths have occurred within the state's nursing homes in a developing scandal. The following chart shows the number of newly confirmed coronavirus cases and deaths attributed to COVID-19 reported within the U.S. each day during the eight weeks from 10 March 2020 through 5 May 2020. 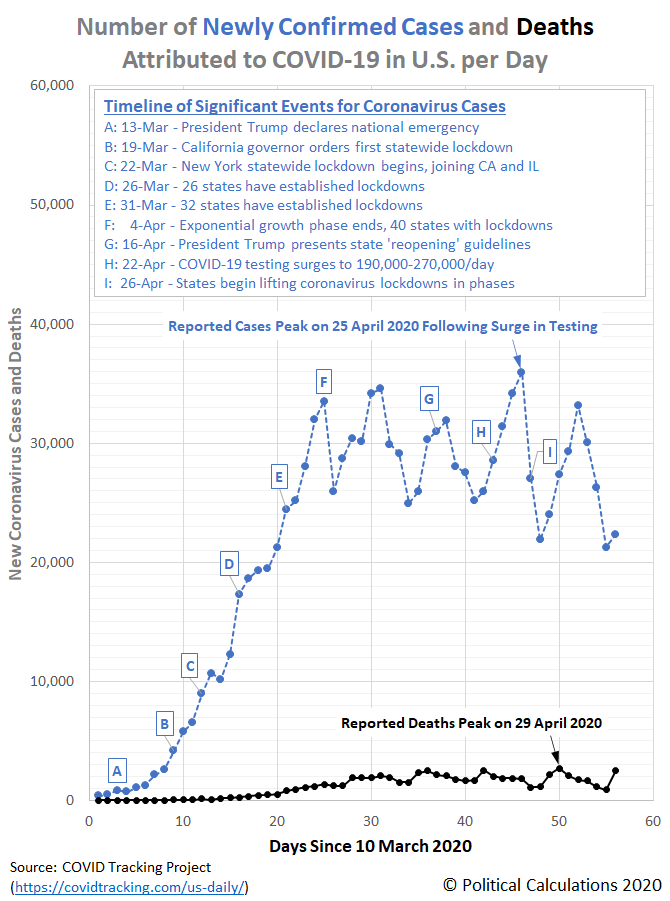 A sudden transition from exponential to relatively steady growth appears to have taken place on 4 April 2020, with the number of new cases showing noisy day-to-day volatility and a slowly falling trend in the weeks since. The number of deaths attributed to COVID-19 each day has lagged behind the overall case count, with a peak having been reached on 29 April 2020 following some revisions in the data in the past week.

Getting to where the big news is, the skyline tower charts illustrating the progression of COVID-19 cases for U.S. states and territories from 10 March 2020 through 5 May 2020 are below, where we can see the slowing rate of growth of confirmed cases in the individual state or territory tower charts, and for the states and territories that report the number of recovered patients, in the transition from orange to lighter green shading in their tower charts.

Each of these charts span the same period of time and the width of each corresponds to 2.0% of each state or territory's population, making it very easy to see which states and territories have been most impacted and which have been the least impacted through the first seven weeks of the coronavirus epidemic in the U.S., especially since we've ranked them from the highest percentage of infection within the state's population to the least as you read from left-to-right, top-to-bottom.

Another sign of improvement is that for the second week in a row, we haven't needed to adjust the horizontal scale of the charts to accommodate larger percentages of confirmed cases within the populations of the most affected states and territories.

While most states and territories are either starting to show signs the spread of the coronavirus is slowing or are showing clear signs of improvement, several are not. These disappointing regions include the District of Columbia, Maryland, Illinois, Indiana, Virginia, Pennsylvania, Nebraska, and Puerto Rico.

We also note that many of these states are either slow in reporting their number of recovered cases or haven't reported any at all, so conditions in some of these states or regions may be better than have so far been recorded.

On the positive improvement side, Louisiana, South Dakota, Tennessee, Arkansas, Texas, Oklahoma, Wyoming, Maine, Guam, and West Virginia are each displaying the positive trends we would want to see develop in the worst affected states ranked at the top of the chart.

Here's our series of articles featuring the data visualization we've developed to track the spread and severity of the coronavirus epidemic at the state level, which we've listed in reverse chronological order:

We're also covering the worst-in-the-U.S. situation in the state of New York, which includes a timeline of the Cuomo administration's coronavirus nursing home scandal we may soon break out to feature in its own post:

Meanwhile, if you prefer your data in the form of tables presenting numbers and percentages, we also have you covered!