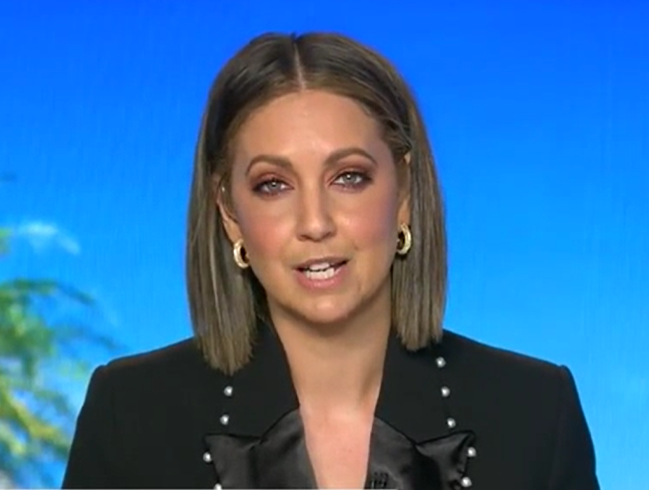 Like most Aborigines who make it into the media, she is effectively white, with only a little Aboriginal ancestry.  Unlike most such, however, she is not a whiner

The Indigenous Today show host spoke out after it was revealed Chris Lilley's controversial comedies were being pulled from Netflix in light of the Black Lives Matter movement.

'If these companies truly want to make lasting change and not just virtue signal in a moment of turmoil, then they need to support new talent,' Boney said on the show on Thursday.

'They need to open doors that have been closed to people of talent before.

'So if they truly want to make a difference in the way that we tell stories about who we are in society, then we don't do that by deleting things we've done in the past we do it by making sure we don't do it again in the future.'

Boney explained it was important not to remove the shows as they served as important reminders of how people of colour were viewed in the past.

'If I have children, I don't want them to see and to think that that is how they fit into the world. But I'd also like to show them how poorly our people were thought of and treated in the past,' Boney said.

'These things hurt because it feels lie these people are punching down. It's easy for people who are on the bottom rung of the ladder.'

On Wednesday, Deadline revealed four of Chris Lilley's shows - Jonah From Tonga, Angry Boys, Summer Heights High and We Can Be Heroes - had been removed from the service in Australia and New Zealand.

In the past, those shows raised questions about racial discrimination as several of the characters were portrayed in blackface and brownface.

Must not speak Chinese to a Chinese person (??)

She was greeted in both Mandarin and Cantonese but neither was any good, apparently

I speak some German and some Italian and during my lifetime I have always found that German and Italian people were pleased when I tried to speak their language.  But we now live in more negative times, it seems

Newly eliminated MasterChef contestant Sarah Tiong has lashed out at an Australian radio station after they greeted her in Mandarin Chinese.

In a series of posts on Instagram Stories on Wednesday, the 29-year-old said she 'felt uncomfortable and shocked' by the incident.

'Today, in an Australian radio interview with Triple M Sunraysia, the host greeted me by saying "ni hao ma",' she explained.

'I do not believe this went to air. However, I felt uncomfortable and shocked. The call was immediately ended. This is racism. What an insensitive, tone deaf thing to say. Please, check yourself and do better.'

A fan then responded to Sarah's post, asking why she thought it was racist, prompting the MasterChef: Back to Win star to explain further.

'It is racist to assume I identify as Chinese and speak the Chinese language,' she continued, after the fan commented that they thought it was 'respectful'.

'Even if I have referenced such heritage or knowledge in the past, it is privileged and ignorant to assume anything about me based on the colour of my skin.

'It is rude and privileged to assume that I understand that Asian language, just because I appear of that descent.'

Sarah continued, revealing the unnamed host had then asked her if it was 'lei ho ma' instead.

'The mere presumption that I speak or want to speak Mandarin or Cantonese with you followed by the flippant dismissal of distinguishing the two different languages is racist,' she added.

'It is not funny, or clever. It just illustrates how deep rooted racial toxicity is in this country, and anyone with a voice in media should know better,' the 38-year-old added.

Temperatures have plummeted below zero across South Australia, with one part of the state shivering through its coldest June morning in 75 years.

A record low of 0.9 degrees was recorded at the West Terrace weather station at Adelaide hills, the coldest overnight temperature since 24 June 1944.

However the rest of Australia is being lashed with rain, and the wet weather isn't disappearing anytime soon.

The Perisher Valley in NSW reached a low of -6.6C on Tuesday morning with snow showers expected for alpine regions in NSW and Victoria at the weekend.

Snow is also forecast to hit the New South Wales alps at the weekend.

In the top end, Darwin will continue through the dry season with high temperatures of around 32C with sunny days and blue skies.

Chinese international students have defended Australia as a "safe" destination for study, despite a travel warning issued by the Chinese Government urging students to reconsider.

In a statement published on Tuesday, China's Ministry of Education cited both the risk of COVID-19 and "racist incidents targeting Asians" in Australia.

Anti-discrimination groups have reported a rise in anti-Asian racism during the pandemic, and media outlets, including the ABC, have covered cases where people of Asian appearance were targeted due to the coronavirus.

The 28-year-old, who is studying a masters degree in biomedicine at the University of Adelaide, said he felt safe in Australia over the last four years, and felt the warning was more of a Canberra-Beijing spat than a genuine concern for the safety of millions of students in China.

"The first warning [over the weekend] for travellers was not even necessary, and this one for students has gone too far," Mr Zheng said. "It's not even truly protecting its citizens, but a political debate in the guise of addressing racism."

Mr Zheng said he believed students in China should continue to be entitled to choose their destination to study abroad, and told the ABC that he still recommended Australia as a good place for interested Chinese students.

"I hope Chinese students who had an intention to study overseas would make their decisions based on their own career and life-planning," he said. "I hope they won't prioritise the authorities' warning for where they are going."

One of Mr Zheng's friends, 28-year-old Chinese student Primo Pan, who is currently studying a PhD in the University of Adelaide, told the ABC the warning was "over the top", even though he had been subject to racism a few times during the COVID-19 pandemic.

"There was an increase in racism targeting Chinese people in Australia, but it’s still a safe place where your personal security is not threatened," Mr Pan said.

"Ordinary Chinese people are caught up in the crossfire between Australia and China." 'I don't believe this allegation has any sort of solid ground'

"The political sense is way more meaningful than the actually scenario. I live in Australia and I feel very well," another Weibo user said.

But Dr He-Ling Shi, an associate professor in economics at Monash University, told the ABC Beijing's allegation was unfair.

"I don't believe this allegation has any sort of solid ground. Since the outbreak of COVID-19, Australian universities have taken various measures and tried to help overseas students ... and also facilitated their studies in Australia," he said.