Updating comparatives between the U.S. and the EU27 in terms of case counts, deaths, and death rates: 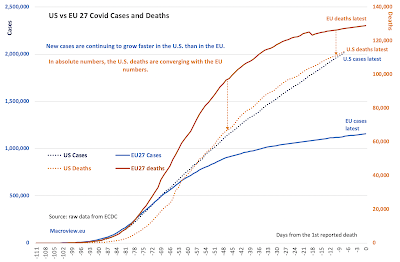 The above shows overall data for cases and deaths counts. The U.S. is showing no moderation in trend and new cases and deaths reported, despite the country being hell-bent on exiting COVID19 pandemic restrictions. The data is yet to show any significant impacts of the ongoing social protests and unrest, which are coming down the line.
Next up, comparatives to the EU27: 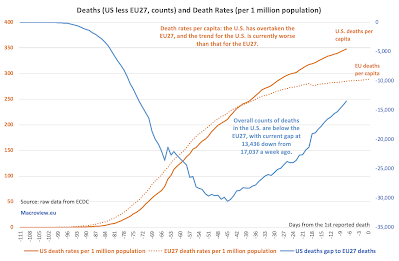 Adjusting for the differences in the onset of the pandemic, the U.S. has overtaken EU27 in terms of deaths from the pandemic some days ago and it continues to pull away. Even in absolute day-to-day comparatives, the gap in total deaths counts between the EU27 and the U.S. is closing rapidly. This is important, because the U.S. pandemic is crucially of later vintage than that in the EU27, implying that:
None of the above is happening, implying that the pandemic itself and the public health system response to the pandemic in the U.S. is worse than in the EU27.
To see this more clearly, here are the U.S. death rates per 1 million population difference to the EU27: 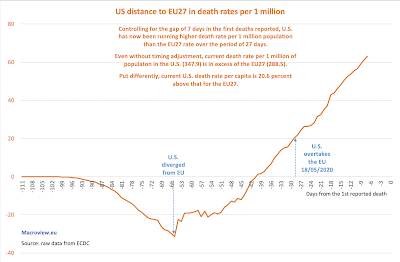 The above numbers and trends are woeful for the U.S. and clearly signal poor management of the pandemic response in the country.