How is it that some of the craziest patents come from organizations best known for their buttoned-down character?

The IIE team raised that question recently in considering the strange case of HM Flying Saucer, in which a patent for a flying saucer was issued to the British Rail Board in the 1970s, when the organization responsible for all surface rail transportation in the entire United Kingdom was owned by the British government.

In telling that story, we recounted how the basic quadcopter drone concept had been similarly invented, seemingly as a side project by its inventor at their employer. Although that concept has largely become synonymous with what people now visualize when they think of flying drones today, it was never really pursued by the firm that employed the engineer who invented it.

Perhaps it was a little too far ahead of its time. Perhaps it was a little too crazy and impractical for the technology of its day. But today, the quadcopter drone concept represents perhaps the most grounded portion of a new patent recently awarded to another inventor employed at a firm famed for its buttoned-down character, for the express purpose of serving a cup of coffee to an individual consumer, from the sky.

We're not making this up. U.S. Patent No. 10,040,551 was issued on 7 August 2018 to inventors Thomas David Erickson, Rogerio S. Feris, Clifford A. Pickover, and Maja Vukovic, who are all employees of computer giant International Business Machines (NYSE: IBM), to which the patent was assigned.

Here's an illustration from the patent, which tells a story that only the inventors could have conceived, in which the drone's sophisticated application of facial and/or gesture recognition allows it to identify which consumer among a group is the one to whom it needs to deliver coffee: 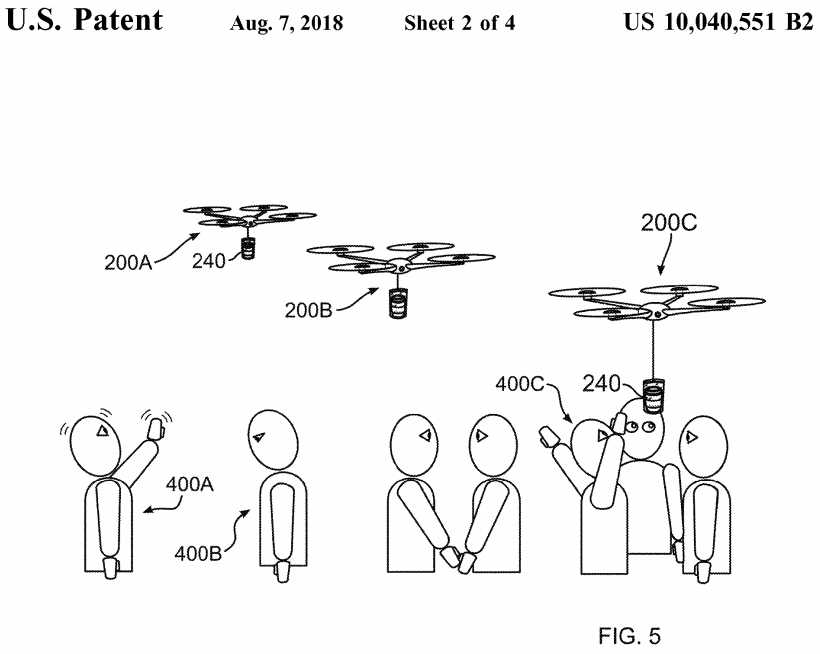 Here's the story, straight from the description of the invention, which describes that in action, but also takes it one step further. Read the whole thing, but pay close attention to the portion of the text we've highlighted....

In an embodiment, system 100 recognizes faces to identify users. One or more cameras mounted in a serving area, or provided upon a drone, can gather images of users in the area. Face recognition can be carried out using any known or herinafter developed technology, and can include for example deep learning technology, such as is described for example at http://www.cs.toronto.edu/~ranzato/publications/taigman_cvpr14.pdf. Video analytics or other software or electronic processing circuit for carrying out the face recognition can be provided within or carried entirely by the drone, or results of face recognition can be provided to the drone based on video data sent by the drone or a fixed camera to a separate and distinct processing circuit not on the drone. The face recognition can enable the drone to determine an identity of a particular user in an area, and to then bring the correct drink to the user.

With reference to FIG 5, in another embodiment, as with facial recognition, the drone can perform some or all of gesture recognition, either sending image data to a server which alerts the drone to particular gestures or instructs the drone to deliver to a particular user making a gesture, or the drone carries out all such processing on-board. Such gestures can include a nod or hand wave, particularly if the user is looking at the drone. Information regarding gesture recognition can be found at https://en.wikipedia.org/wiki/Gesture_recognition. A hand wave can indicate to bring coffee, or can indicate that coffee is not wanted. System 100 advantageously can discern between a wide variety of such gestures, which can be different among people of various cultures. This is illustrated in FIG. 5, in which user 400A identifes that user 400B appears to be sleepy, and gestures to drone 200B to bring coffee. The gesture in this example includes a raised hand, and a nod of the head and/or hand, while looking in the direction of drone 200B. In response, drone 200B can hover near user 400A until either user 400A or 400B accepts the coffee. After a predetermined interval, if the coffee is not accepted, or if a user performs a gesture interpreted as waiving away drone 200B, drone 200B can leave with the coffee. In an embodiment, drone 200B emits an alarm if the wrong individual intercepts the coffee or other drink.

Also in FIG. 5, user 400C is gesturing in a different manner to user 400A, and is looking in the direction of drone 200C. As with user 400A, the head is tilted backwards, further indicating that the user is directing his attention to a drone. Accordingly, drone 200C approaches to deliver a coffee drink 240.

We're not quite sure what to make of this brave new world the IBM inventors envision. Perhaps it's the mass electronic surveillance and the continuous monitoring of faces and gestures to pick out individuals expressing a particular need or emotional state. Perhaps it's the idea that a shared public airspace in an office or other location might someday be darkened with drones carrying coffee or other pick-me-ups to target individual consumers for drowsiness reduction or other mood enhancement.

And maybe it's wondering why IBM, of all companies, would seek to patent such a seemingly crazy system so far outside of its established product and service offerings?

Thanks to a 2018 article about IBM's coffee drone patent, we found the answer:

"IBM encourages our researchers to pursue their inerests even though not all of their inventions become commercial products," spokeswoman Amanda Carl said in an email.

There you have it. IBM's corporate officers might think its crazy, but why not invest a few hundred thousand to boost the morale of your creative employees and gain the documented privilege of being able to say you were first? Better still, since having an active patent grants the assignee of the patent with a period of exclusivity in which they can legally block other firms from using the kind of technologies they describe, they might even make some money from licensing it to other firms that can figure out how to make actual money by using the patented technology.

Patents aren't just about human ingenuity. They can also be about serious business strategy.